The gruesome scene of a young girl being flogged in public illustrates the brutal rule the Taliban have enforced in the Swat valley, raising serious questions about the government’s policy of appeasement of militants trying to push the country back to the Dark Ages.

The two-minute video showing a black-turbaned man holding down the girl’s feet, another her head while a third man hits her with a leather strap, has shaken the nation and exposed the brutal face of the illiterate mullahs holding sway in a large part of northwestern Pakistan.

The incident, which took place in Kabal district in January and surfaced only recently, is a stark reminder of where Pakistan is heading if the growing threat of Islamic extremism is not checked. The government and the military have surrendered the valley to the militants, who are responsible for the killing of hundreds of people. The so-called peace deal has legitimised the Taliban brutalities, and emboldened the radicals — who now aim to spread their influence to other parts of the country. 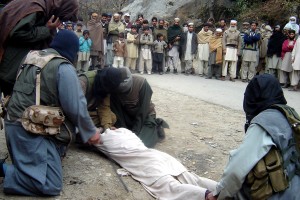 The 17-year-old girl was punished for stepping out of her house with her father-in-law, an act the Taliban described as un-Islamic. “For God’s sake stop it,” the girl pleaded in Pashtu as the bearded man beat her. Her shrieks failed to move the men who watched the wretched spectacle quietly. She was dragged to her house after the punishment.

Muslim Khan, spokesman for Tehrik-e-Taliban (TTP), Swat, confirmed the incident, insisting that the girl had illicit relations with her father-in-law who, according to him, was also punished. “The punishment was in accordance with Islamic Shariah,” the militant leader declared, adding that under Shariah she should have been stoned to death.

Over the past year, scores of women have fallen victim to the Taliban’s brutal rule. A woman councillor, Bakhat Zeba, was shot dead outside her house earlier this year in Mingora after she criticised the Taliban’s decision to stop girls from going to school. There have also been cases of rape and women being punished for refusing the marriage proposals of members of the Taliban. The government has failed to take action against the people involved in these crimes. In fact, several militants involved in heinous crimes have been released by the provincial administration after the controversial peace deal.

After the withdrawal of the army to the barracks, the region is now effectively controlled by Islamic radicals who continue to run checkposts. Government officials take orders from Taliban leaders. The fighting may have stopped after the peace agreement, but militant violence continues unabated.

The Taliban are openly defying the agreement and have refused to surrender their weapons. On April 1, armed Taliban blew up the house of Amir Muqam, a former federal minister and opposition member in the National Assembly. But the provincial government has completely capitulated, leaving the population at the mercy of marauders. “It is the peace of the graveyard,” says Jahangir. 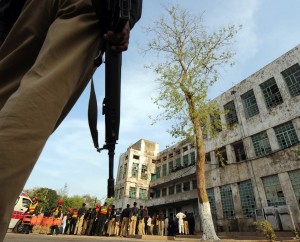 Provincial Information Minister Iftikhar Hussein virtually defended the Taliban when he declared that the flogging video was released to sabotage the peace deal. “It was an old video of an incident which took place before the peace agreement,” he said. Even the Taliban could not have presented a better defence for their atrocities.

The role of the ANP — which leads the NWFP provincial government — has been pathetic to say the least. The so-called liberals appear to have been terrorised into surrender. By handing over Swat to the militants, they have opened the way for the Talibanisation of the entire province.

Condemnation [of the flogging] wasn’t unanimous. Some mainstream politicians and religious leaders defended the beating, saying the punishment was in line with Islamic law. “How can we term it un-Islamic?” asked Mufti Munibur Rehman, a leading Muslim scholar, in a televised debate. “This is the punishment that is written in the Holy Quran.” Munawar Hussain, the newly elected chief of the Jamaat-e-Islami declared the incident as “not a big deal,” exposing his party’s views on women and their support for militancy.

After NWFP, the militants are now moving to the Punjab. The attack on the Sri Lankan cricket team and the assault on the police academy in Lahore raised fears that militant violence, which was mainly restricted to northwestern Pakistan, is now spreading to Pakistan’s heartland.

Seven cadets, a civilian and four attackers died in Monday’s raid, in which assailants — armed with guns, grenades and suicide vests — stormed the academy. More than 90 people were injured. Baitullah Mehsud, chief of the TTP, claimed responsibility for the bloody assault and warned of more such attacks until Islamabad stopped supporting the US.

Mehsud, for whom the US has posted a five-million-dollar reward, calling from an undisclosed location, told journalists: “This was in retaliation for the ongoing drone attacks in the tribal areas.” There will be more such attacks, he warned, adding, “Our next attack will be much more devastating.” For Mehsud to personally claim responsibility for a terrorist action is rare.

The Taliban chief also signalled that he may be seeking to widen the scope of his fight beyond Pakistan. “Soon we will launch an attack in Washington that will amaze everyone in the world,’’ he said.  The US has recently stepped up missile strikes on Mehsud’s stronghold in South Waziristan. A US official said the militant commander was their main target.

The Punjab had, until recently, been spared much of the violence, although some of Pakistan’s most potent Islamic militant groups originated in the region and still draw recruits from its poor, rural villages.

Pakistan has endured scores of suicide bombings in recent years, but the two major terrorist attacks last month indicate a changing pattern, with militants engaging in daring gun battles in the country’s main urban centres. Intelligence sources say that south Punjab has become the main recruiting centre for militant groups which continue to operate freely, despite being outlawed.

These militants, trained in the past by Pakistani intelligence agencies to fight in Afghanistan and Kashmir, have been involved in fighting in the tribal regions, but they have now turned their focus to the Punjab. Intelligence reports have warned that many militants, including some Uzbeks, had entered the Punjab recently from tribal areas to target security installations.

It is quite evident that the attacks are becoming more organised and coordinated, indicating that more than one group is involved. Analysts say that the security services have yet to adapt to the new threat, and even politicians admit that the forces of law and order are not fully equipped to counter the growing threat.