At 7 a.m. on March 30, Muhammad Faisal, a 22-year-old trainee police constable, was following his daily routine at the main ground of the Manawan Police Academy, situated 13km from Lahore. Thirty minutes later, he, along with at least 500 other newly-recruited constables, were at their morning drill, when he heard a loud blast. “A hand grenade exploded just a few metres away from me. I saw at least five seriously injured people who had fallen to the ground. I was also slightly injured. I could hear the cries of my injured colleagues and also some of the attackers. It took me two or three minutes to jump the wall,” says Faisal. 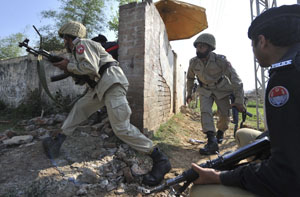 Able to see just two of the attackers, Faisal believes “they were no more than 25 years of age” and wore sky-blue shalwar kameezes and sports shoes. Another trainee constable, 23-year-old Muhammed Atif, who was able to escape the scene five minutes after the blast, says that the attackers were spraying bullets from all directions and that “some of them came through the main and back gates, while others jumped the main boundary wall of the school. I saw many of my injured colleagues crying and falling to the ground. I am not sure how many attackers there were but it seemed like there were between 10-15 people.” According to Atif, some of the terrorists were in police uniform and were holding many officers hostage. 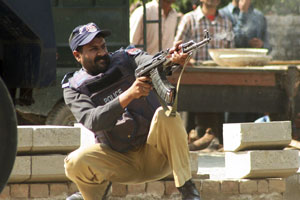 Within minutes of the blast, hundreds of citizens and journalists descended on the training school, while the police reached the scene 30 minutes after the attack. By around 9:30 a.m., the Rangers and the army reached the site and cordoned off the entire area.  According to a police official, this was done because at least two civilians had suffered serious bullet wounds, one of whom later died. The official in charge of the Punjab Elite Force said, “We disallowed live coverage because we received information that the masterminds of the attack were monitoring the live coverage of the police operation and giving information to their people inside.”

Meanwhile, the rescue operation inside the training school was not going too smoothly. IG Punjab Police Khwaja Khalid Farooq told the media that the terrorists had occupied the second and third floors of the compound, while security officials were on the first floor. “Whenever security officials tried to get to the second floor, the terrorists used hand grenades and opened fire to stop them.” He also reiterated that their first priority was to get the hostages out alive and then to arrest the terrorists. 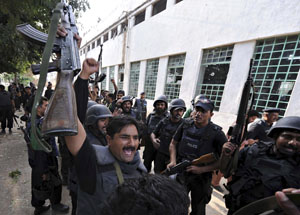 From noon to 1:30 p.m. there was a lull in the violence but, soon after, four consecutive explosions were heard followed by gunfire. This lasted for about 10 minutes and was described by local resident Furqan Ali as “the worst firing since the 7:30 a.m. firing and blasts.” Ali says that he saw more than 20 dead bodies and 100 injured men being taken out of the training school. But the IGP says that only eight policemen had been killed.

At around 3:30 p.m. security officials declared that they had taken control of the school and that the terrorists had either been killed or had blown themselves up. To celebrate their success, the police officials started firing bullets in the air and chanting Islamic slogans. The celebrations went on for at least two hours. One stunned observer said, “It is shameful that the Pakistani security forces, especially the police, glorified a shameful defeat at the hands of a few terrorists as such a big victory.”

Farooq led the operation while the head of the Rangers and high-ranking officials of the army were also present. Army helicopters were used to provide aerial surveillance of the area. A suspected terrorist was also arrested from a nearby village, as he tried to approach the army helicopters. He was later identified as Hijrat Khan and two hand grenades and a pistol were recovered from him. According to police sources, Hijrat was told to blow up the helicopters by the attackers inside the training school. Later, Farooq confirmed that two other terrorists had been arrested and that a high-powered investigation team, including officers from the police, Rangers, army and other security agencies, had been constituted. “They will file their first report in the next three days and then we will tell you who was responsible for the attack,” he said.

In subsequent days, 59 suspected terrorists were arrested from different cities, including Lahore, Faisalabad, Sialkot, Gujar Khan, Dera Ismail Khan and Sukkur. Many of them had suicide jackets. These arrests were made based on information provided by Hijrat Khan.

According to de-facto interior minister Rehman Malik, only one of the terrorists had been captured alive, while the rest blew themselves up. He did not rule out the possibility of the involvement of local jihadi groups but said that it would be premature to start placing blame. He also unveiled a plan to fight terrorism in the country: “We are planning to provide 25,000 highly trained and fully equipped security personnel to each province to fight terrorism.”
In a statement, Baitullah Mehsud said the attacks would continue “until the Pakistan government stops supporting the Americans.”

Security officials believe that the brazen occupation of the Punjab training school by heavily armed gunmen is the latest indication that militants, once confined to the northern tribal belt, now have the capacity to attack targets anywhere in Pakistan. Shuja Nawaz, a Pakistani-American military expert, was quoted in the western media as saying, “The realisation that this problem is no longer confined to a buffer zone with Afghanistan must dawn on everyone in Pakistan. Pakistan has the wherewithal to deal with the problem, but does its leadership have the will to do so? The nexus between militants in the Punjab and in the tribal areas has been clear for some time now. Now the question is whether the government can penetrate and dismantle these networks. The army is overstretched, so we have to start dealing with the causes of militancy — the vast gap between the rich and poor, the lack of governance — that Pakistan has neglected for so long.”

The attack on the Manawan training school was the second major terrorist attack in Lahore this month. On March 3, a squad of gunmen attacked a bus of visiting Sri Lankan cricket players. Both these incidents have shown the failure of our police force to fight terrorism.

And it is increasingly the police that is coming under attack. According to a senior police official of the National Police Bureau, “The police are a favourite target of these terrorists as the number of attacks against police officers has increased from 113 in 2005 to more than 1,500 in 2007. The number of terrorists killed by police officials, however, is minimal.”

While the Punjab police is not ready to admit the security lapses publicly, a source in the police says the security was abysmal. “Only four trainee policemen were deployed at the main gate at the school. No police guards were deployed at any other spot at the school on March 30, which clearly shows that no extraordinary measures were taken after the CID intelligence report about the possibility of Mumbai-style terrorist attacks on important police installations in Lahore, including the Manawan Police Academy.” The source also says that there was no patrolling squad or police pickets around the school and that there were only seven machine guns, with a few hundred bullets, at the school at the time of the attack.

SSP Police Training Major Mubashar, who is also in charge of Manawan Police Academy, told Newsline that security arrangements at all police training schools in Lahore were being supervised and carried out by trainee police officials. While this arrangement still hasn’t been changed in the wake of the attack, Mubashar says, “Now we are trying to deploy those trainees who are in their final stages of training.”

Afzal Shigri, a security expert and ex IG police, claims that the police is facing a lack of resources. “You need to form special police teams to confront terrorists. Many countries have SWAT teams with the sole purpose of responding to such attacks swiftly, while the remaining police force is used for back-up.” According to him, while the Elite Force has been trained along these lines, they do not have the latest technology and arms which the terrorists possess.

A high-ranking police official explained that this lack of technology is affecting intelligence-gathering. “The police department is so under-resourced that even to trace a mobile phone call, we need to ask the military or intelligence agencies for assistance. At present, we only have six police forensic laboratories. They, too, are ill-equipped and do not have enough trained staff.” He believes that they need at least 100 forensic labs with modern facilities.