The terrorist attack on the Sri Lankan cricket team, the Mumbai siege, surrender of Swat to Mullah Radio, pitched battles with the Taliban in FATA and many other such incidents have raised a number of questions. Worried Pakistanis ask each other why militancy is on the rise. Why has the government failed to take terrorist organisations to task? Who are these so-called jihadi organisations? How serious is the militant Islamist threat to Pakistan?

The educated elite of the country, including many talk show hosts, newspaper columnists and armchair analysts (thanks to TV, they are a dime-a-dozen these days) seem to be clueless about the actual gravity of the situation. For the benefit of all those who are understandably concerned about the threat to internal security from the militants, I have shortlisted five books that should serve as a guide to militant organisations.

They are: A to Z of Jehadi Organizations in Pakistan by Muhammad Amir Rana, The Fluttering Flag of Jehad by Amir Mir, Islam and Education — Conflict and Conformity in Pakistan’s Madrassahs by Saleem H. Ali, Descent into Chaos by Ahmed Rashid, and Religious Revivalism in South Asia: a collection of research papers published by South Asian Policy Analysis Network (SAPANA).

A to Z of Jehadi Organizations in Pakistan was published in Urdu in 2002 by Mashal Books. This research-based book was translated into English by Saba Ansari and published in 2007. Braving many odds, Amir Rana has collected the basic data about all major jihadi organisations and their leadership in this book. The data, according to Rana, is based on “visits to 125 madrassas (seminaries) and offices in 47 cities in Pakistan and Azad Kashmir and 160 interviews of leaders and workers of religious, sectarian and jihadi organisations.” 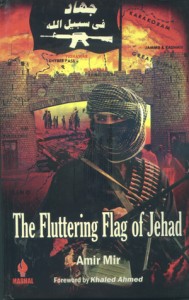 According to Rana, there are 237 religious organisations in Pakistan, out of which 104 are jihadi, 24 political, 82 sectarian and 26 tableeghi. Besides giving the who’s who of the jihadi organisations, the author has dealt in detail with their party structure, teaching and training methodology and the background of these leaders. The book also gives the sectarian breakdown of these organisations, their number of offices, number of martyrs and basic ideology.

Rana points out that the total number of madrassas in the country up until 1980 was only 700 and had been growing at the rate of 3 per year. But “by the end of 1986 [the figure] increased by 136%.” Today, if we take the official figures, this number has risen to over 12,000, although unofficial estimates suggest that there are 20,000 madrassas at present. Interestingly, while the majority of the Muslims in Pakistan are from the Barelvi sect, 60-64% of the madrassas are under Deobandi organisations. One reason given by most of the researchers for this disproportionate population of madrassas is that much of the Saudi and Gulf money has flown to Deobandi organisations. Rana also explains their relationship with the local and American intelligence agencies and how these Deobandi organisations have multiplied over the years. Those who express doubts about the militant role of Lashkar-i-Tayyaba (LeT) can find enough material in Rana’s book to clear their mind, as he has quoted extensively from the now defunct LeT magazine, Dawa. LeT has proudly narrated how its ‘brothers’ attacked Delhi Red Fort and Srinagar Airport. But most revealing is an excerpt from an invitation to a 1998 ijtema (congregation): “Along with thousands of Pakistanis, mujahideen from Kashmir, Bosnia, Chechnya, the Philippines, Eritrea, Somalia, Africa, America, Arab and European states are forming an impenetrable wall at every front in the world receiving their training from Muaskar Taiba in Afghanistan … You can go to any jihadi front in the world and you will find Markaz-ul-Dawa Wal Irshad mujahideens crushing the infidels and destroying the fortresses of the devil, God-willing.” 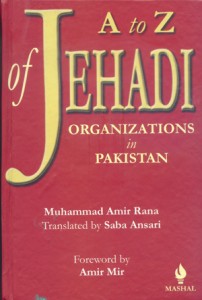 One hopes that Rana will update his courageous work and publish a new edition. Unfortunately, not many people know about this informative book. Publisher Masood Ashar states that Mashal could only sell 1,000 copies of this book. Out of print, at present, he is trying to get an updated version printed soon.

The foreword to A to Z is written by Amir Mir, a Lahore-based journalist who specialises on jihadi organisations in Pakistan. Last year he came out with his own book, The Fluttering Flag of Jehad. Once again, it was courageously published by Mashal Books, but without much publicity. Amir Mir’s first book on this subject was The True Face of Jehadis, published some time back. Though much of the material in his new book is based on his articles printed in The News, there is also some additional information. It is good reading for those who have not followed his articles in the newspaper. Reading his columns in a book form also reveals a bigger picture and jolts the readers to realise the threat to the internal security of the country from jihadi organisations.

With the help of a number of international research reports, personal interviews and off-the-record information, Mir has shed light on the killings of Benazir Bhutto and Daniel Pearl, and the attacks on Pervez Musharraf. Highlighting the danger posed by the Islamic militants after 9/11, Amir Mir says, “[The possibility of] terror attacks can be well gauged from the fact that it [terror] is now spreading from the border areas to the settled areas like Peshawar, and might eventually reach into the heart of Pakistan.” How true. Islamabad and Lahore have been hit many times and the end is not in sight.

Those middle-class apologists, who defend the Taliban under Islamist or leftist pretexts, should read this book to refresh their memories on how the jihadi leaders want to take the fight to almost all the countries of the world. Amir Mir has quoted from the Tehrik-e-Taliban’s amir, Baitullah Mehsud’s interview to Al Jazeera: “Our main aim is to finish Britain and the United States and to crush the pride of non-Muslims. We pray to God to give us the ability to destroy the White House, New York and London … Very soon we will be witnessing jihad’s miracles.”

The collection of articles published by  SAPANA in its book, Religious Revivalism in South Asia, gives an overview of religious extremism in the region. Though it has articles covering extremist trends in Hinduism and Sinhala-Buddhist nationalism, most of the research papers are dedicated to Islamic revivalism and extremism, particularly two papers by Khaled Ahmed, who is a veteran journalist-intellectual. In his paper “Islamic Rejectionism and Terrorism,” Khaled takes a close look at the role of madrassa education, using case studies of institutions like the Banuri Mosque madrassa, which produced some of the prominent leaders of the Taliban and jihadi movement and their links to extremist organisations. He discusses the issue with scholarly insight. Khaled concludes: “One can assert that the extremist Muslims have the same worldview. It is based on the belief in the unchangeability of the sources of Islamic Shariah. This trend has negated the efforts of the 19th century Muslim reformists who thought that Shariah could be reshaped in accordance with modern times, what the founding thinker of Pakistan, Allama Iqbal, called ‘reconstruction.’” Khaled has pointed out the crux of the present predicament of the Muslims: “If these are times of trouble for Muslims they do not register them as such: there is no self-doubt in the minds of those who see the Muslims suffering in many parts of the world. Normally, self-doubt produces the instinct for self-correction through notification of fundamental beliefs. On the contrary, extremist Muslims use the device of denial to avoid registering the fact about their situation.”

In another article “Islamic Extremism in Pakistan,” Khaled Ahmed has particularly touched upon the rise of Salafist Islam in Pakistan. The resistance to change is most vehemently defended by the Salafists, who believe that the Shariah, as practiced in the first 38 years of Islam, should be copied and implemented. Any deviation from that, they preach, should not be tolerated.

Islam and Education — Conflict and Conformity in Pakistan’s Madrassahs by Saleem H. Ali is a research study which would help in further understanding the role of madrassas in Pakistan. The writer has based his research on the madrassas of two socially and economically diverse areas — Ahmedpur Sharqi and Islamabad. He has collected interesting data indicating that Islamabad alone has 117 madrassas, with over 14,000 students, who are overwhelmingly from the north of Pakistan. He has also given detail of how the madrassa reform efforts of the government have failed so far.

Descent into Chaos by Ahmed Rashid is the most important book if one wants to understand the bigger, regional picture of how Pakistan is linked with the Taliban’s resistance movement in Afghanistan; how our governments have been double-crossing the US and NATO forces by covertly supporting the Taliban; the linkages of Afghan Taliban with the local jihadi organisations of Pakistan dating back to the Afghan war, and how the whole region is affected by the destablisation of Afghanistan and is descending into chaos. This book has been widely reviewed and discussed internationally. Ahmed Rashid is considered an expert on this region’s conflict and, of course, on the Taliban. He was the first writer to publish a book on Taliban, much before 9/11, the event which shook the world and sharpened the conflict between the Islamic revivalists/extremists and the moderates — something which we are witnessing and suffering today.