Pakistan has a global image problem. Everyone knows this. Talking Filmain is hoping to fix it.

With the release of their documentary Made in Pakistan, the independent movie production company wants to show another side of the country. Unveiling this different side to the generally propagandised West, though, is not meant to erase the reality of “militancy, religious extremism and terrorism” that dominates the international narrative of the nation. It is meant to show that there is a silent majority plugging along despite all the chaos, and that they are predominantly urban, moderate and peaceful — in other words, normal. However, this angle has an objective of its own: challenge the idea that Pakistan is the most dangerous nation in the world.

Out of the 164 million living in the troubled country, the filmmakers chose four educated and ambitious people to be the new face of Pakistan. Of the two men and two women, there is a lawyer, a public relations consultant, an aspiring politician (following in the footsteps of his father) and a magazine editor. For 55 minutes, the film separately follows the modern lives of these four young adults over a two-month period, starting from November 3, 2007, when former president Musharraf imposed a State of Emergency.

Competently shot and thoughtfully structured, the film zips between the four personalities, pointing the camera into their lives. So when the four are not directly addressing the camera, they allow the viewer to be a fly on the wall: the filmmakers document them at work, home, among friends and in the community. The end result is a snapshot of four modern individuals trying to find their place in a challenging world. Some of the personal stories are engaging, propelled along by scenes that are both vivid and gripping, such as when Waleed, the lawyer, tries to meet Aitzaz Ahsan who is under house arrest. 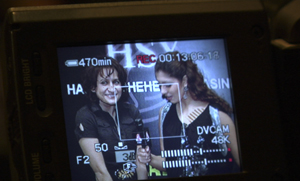 There is a problem with their picture of Pakistan, though: it is not very diverse. The four people profiled are all from one social class. And all are from one city. The movie may as well have been called “Made in Lahore.” The challenges confronting three of the people are too similar: to find success at work. Where is the middle-class man who personally has to face corruption, injustice and temptation everyday, but keeps on the straight and narrow, barely squeaking by in an attempt to put food on the table and educate his children? The viewer only gets a cursory glance of people facing the relentless, grinding hardships that affect most of the population. And by focusing on four English-speaking professionals from Lahore, aren’t the filmmakers projecting an equally blinkered view of the country’s stakeholders as the one that simply comprises suicide-vest clad fundamentalists screaming “death to America?”

Still, this restricted portrait of Pakistan is not all bad. For the personality of each character is different. The unscripted dialogue (free of an editorialising narrator) shows each character honestly, allowing audiences to see the differences among this upwardly mobile group. While all are searching for success, some seem to have noble desires with believable motives, distinguishing themselves from others in the group who seem to derive meaning from success rather than aiming for meaning in their success.

The success in this film is that it undoubtedly shows a different side of Pakistan to the world. Normally there is no exposure to the hip, young people publishing thoughtful magazines for the college crowd, or to runway models sashaying down the catwalk in glitzy fashion shows for “all the important people.” But in the closing scenes, the attempt to dispel the notion of Pakistan as the most dangerous place on earth hits a wall — a wall of death, despair, deceit, danger and decline. Curiously, the assassination of Benazir Bhutto ushers in the final chapter of this documentary’s storyline, and while one of the characters mentions hope, none have very convincingly hopeful things to say. Then, in the wake of BB’s murder, the filmmakers move to a devastating suicide blast in Lahore that leaves Waleed emotionally shaken. The film ends by fast forwarding to the end of 2008 to present brutally depressing statistics for the year: 365 bomb blasts, 900 dead.

Talking Filmain may reveal a peaceful, prosperity-seeking majority, but Pakistan still looks as dangerous as ever — leaving the viewer confused about the filmmakers’ objectives. And as a documentary tethered to a specific time in Pakistan’s recent but fast-changing history, Made in Pakistan is already looking oddly out of date.