A dedicated and passionate approach to her work has enabled Jehan Ara to succeed in the traditionally male bastion of IT.

That the public face of Pakistan’s IT industry is a woman comes as a surprise to many, especially to those living outside Pakistan. Generalised perceptions such as ‘women aren’t allowed to leave their homes in Pakistan,’ are similar to the misconceptions that exist about the IT industry, says Jehan Ara, president of the Pakistan Software Houses Association ([email protected]) and CEO of Enabling Technology.

“IT is not just computer programming.” Not a computer programmer herself, Jehan Ara explains: “IT is a field where you need experts in various areas. You need entrepreneurs, business managers, communicators, creative writers, domain experts, project managers, software programmers etc.”

With experience in journalism, public relations, advertising and sales, and communication being a major interest, when multimedia became a “buzzword” in 1993, Jehan Ara partnered with a friend to open up a content development, multimedia company — Enabling Technology. “The computer became very much an essential part of what communication meant and so I used all my interest in writing, audio, magazine creation and creativity into starting a multimedia company.” 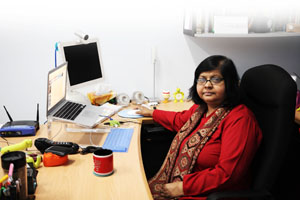 This created inroads to [email protected] — the industry representative. “If you are a part of an industry then you should be communicating with the rest of the people in that industry and contributing towards its growth.” This firm belief led to her being one of the most vocal of its members. And how did the men take to the only woman in their midst? “I think they didn’t quite know what to make of me at that stage,” says Jehan Ara. “I wasn’t a hardcore IT person, yet I was an entrepreneur and I understood the strengths of IT and how to use it. But people in the IT sector are very different from people in other sectors. They’re very accepting of any change and if there was a woman in the IT sector, so be it. Although initially, I don’t think they took me very seriously — I wasn’t considered serious competition.”

Over time people got used to the idea of a female member, but there was more in store that required getting used to. In 2002, some members of the executive committee suggested she should “put her money where her mouth was” and stand for elections. First time round, she was elected vice president of the association. Soon after, the president resigned and the executive committee proposed she continue as president for the remainder of the term. “Unlike our country’s presidency, you need to have an election [in the association] to elect the president if the president’s post is vacated. So I was then elected as president,” says Jehan Ara.

Once the men within were sensitised to a woman’s presence, it was time for outsiders to come to terms with it. “Nobody in this country is rude enough to say ‘hey, you’re a woman, how can you be the head of an IT association.’ They were amused but I think over time, any woman that gets into any area of business proves herself. So I did the same. I was so passionate about what I was doing and I wanted to do it well, and so I did, with, of course, a lot of help from the men within the association.”

But much of what she knows has been self taught. And, according to Jehan Ara, the key to learning is to not be afraid. “The reason why kids pick up technology much faster than adults is because they’re not afraid that if they touch a button the machine is going to blow up. IT is something that a lot of people fear. If you can overcome that fear then you can become very comfortable with technology. That’s how I did it. I like technology, I like gadgets. I buy every possible gadget that I’m interested in and I’m one of the first people to buy it. So as I began to use more and more technology, I found myself becoming very comfortable with it and using it to achieve what I wanted to achieve. It wasn’t then, a technical piece of machinery to me — it was an extension of me and what I could do.” Bottom line: explore.

Her exploration into the various ways of improving the industry led to several innovations, such as introducing the ICT awards, job fairs and career expos, as well as connecting to the world of IT outside Pakistan, and becoming members of regional associations and taking delegations overseas. Among her many accomplishments, Jehan Ara considers sending a delegation to India — one of the most important markets for Pakistan to partner with — to be the greatest.

And so involved did she get with [email protected], she says, “I forgot that I’m a commercial business and I need to be making money for my company!” After being a volunteer president for three years and then an advisor, she took over as full-time president on January 1, 2008. “So now they actually pay me for what I do, which is good. I need the money to buy my gadgets!”

But accomplishing all this, and working in a country like Pakistan, in an industry that relies heavily on electricity, is not without its challenges. Lack of power, infrastructure, public transport and respect for people’s time — a pet peeve for Jehan Ara — are some of the factors keeping the industry from achieving its potential. “Our government does not understand the potential of this sector. We don’t even have a minister for IT yet. No other sector is growing at 35-50% every year, like the IT sector is. No other sector can generate the kind of revenue. Economically, this country can develop into one of the ‘Asian tigers’ that we have always dreamt about being. The minute we realise that this potential is something to capitalise on, the better off we’ll be. So I’m going to continue to make noise until somebody listens to me.”

Jehan Ara gives lie to the notion that single women have an easier path to professional success because they have fewer family obligations. “My mother was ill for about 20 years and required constant attention.” And so, Jehan Ara had to deliver on both ends — home and office. “I found technology to be a great enabler. Because I had a laptop and a mobile phone, I was able to take care of her and continue my work, at her bedside.” She adds, “If women decide this is what they want to do, they do it. I have many friends who work full time and have been able to take care of their homes, their families, their children, their parents and get to top positions — and the reason for that is their commitment. Women do not compromise one part of their lives, just to be able to take care of another.”

Regardless of the fact that Jehan Ara has reached the top-most position, for her, there is still scope for growth in this industry — personally and professionally — every day. And the journey has certainly been fulfilling: “Pakistan has a lot to offer. And there is much I have done in this country that I wouldn’t have been able to do anywhere else. So I have not regretted it and I will continue to live here till they throw me out!”