The decision of the NWFP government to impose a Nizam-e-Adl (Shariah) Regulation in the Provincially Administered Tribal Areas is dictated not by any popular demand but by groups that have let loose a reign of terror in the concerned areas. Claims that the decision is a response to popular demand are not supported by any evidence of the people’s urge for yet another imposition of Shariah. On the other hand, there is ample evidence of the terror to which this population has been subjected by brutal killings, intimidation and fierce warnings against any criticism of the extremists that have taken control of the area or any failure to comply with the edicts issued by them. People have preferred displacement and homelessness to living in areas under the control of these elements. The truth is that the consistent disregard for people’s physical and economic security in actions or omissions of the state, and the failure of its agencies to protect the people from the brutal rule of the militants, has rendered the affected population desperate for peace. It is this desperation that has driven the people to live with any measure that might appease the militants and give people some reprieve from terror.

Laws and systems must emerge from the need to strengthen the dispensation of justice in all its aspects. In order to qualify as a part of the rule of law, they must also be fully in compliance with constitutional provisions and compatible with the overall legal framework in the country. Any law that is dependent on vague interpretations, imperfect understanding of norms from which to derive guidance and on individual perceptions of justice, morality or social order will confuse values and can only result in harming communities, society and the state. Laws enforced as a concession to fear and panic, and in defiance of democratic criteria for law-making, will create more problems rather than resolve any political or social tensions. 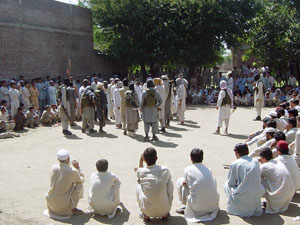 A reading of one draft of the Regulation that was available, reveals significant departure from constitutional and legal principles that render the law flawed in several aspects. The accumulative effect of the law will be to establish a judicial system which will allow diverse, subjective and often conflicting exposition of the Quran and Sunnah to become the basis of judicial determination. The Regulation makes several national and provincial laws applicable to the areas concerned. However, the judges have the power to reject any provision of these laws  or to apply them according to their notions of the Shariah. When the aforementioned laws include the 2006 act, amending laws relating to crimes such as rape and zina for the protection of women, the concern becomes even more grave and real. There are several other laws relating to the rights of children, women and minority communities such as the Ahmedis, freedom of the press, of expression and information, obscenity and on counter-terrorism that will become subject to the interpretations and changes made by individual judges.

The regulation provides for the appointment of “musleheen” who can negotiate a compromise, with the consent of the parties, in any civil or criminal case except offences under the Hadd laws. This means that even those offences that are not compoundable (settled by agreement of parties) under the Criminal Procedure Code (CrPC) can be settled by compromise or “sul’h.” Privatisation of crimes is a dangerous trend that exists in the areas concerned and will now be given legal sanction by the state. This will further erode the writ of the state, and its authority to control and punish crimes will pass to private actors. The connotations for crimes of ‘honour’ will be even more serious in these areas and any improvements that resulted from the amendments in 2004 will become meaningless.

These judges (qazis) are to be assisted by “muawins” who are “well-versed in Shariah.” As the courts are operating at local levels and largely in rural areas, it is not unreasonable to fear that these will be local mullahs totally influenced by the distorted preaching of Islam and steeped in prejudice and bigotry. Although qazis will be judicial officers drawn from the provincial judicial service, the Regulation requires that their conduct and character “shall be in accordance with the Islamic principles.” It is not difficult to guess who will determine this qualification and then insist on who is or is not qualified to be a qazi. The same elements that have extorted this law from the government and who have now had a taste of victory through terror and violence, will impose their will on official appointments. It is likely that the danger extends beyond interference and influence on official decisions. We can expect lynching and killings of judges who have dared to interpret the Quran and Sunnah in any way different from the notions of Islam that the extremists have been propagating.

The problem does not rest there. The Regulation has given these courts a degree of control over the police and other executive authorities that is unprecedented in the judicial authority exercised in any other part of the country. The principle of separation of powers has been disregarded, creating a dangerous imbalance in power and authority of the different organs. The zilla qazi and not the Police Order, though made applicable to these areas, will determine the functioning of the police in relation to investigations. The qazi is required to ensure that investigations are carried out in “accordance with the established principles of Shariah.” It is difficult to say what a “Sharai investigation” would be and what is there in the process of investigation in the CrPC, which is against the Shariah.

Given the fact that the Shari Nizam-e-Adl Regulation of 1999 is already in force in the same areas, it is not hard to conclude that the demand for the enforcement of a new regulation is nothing more than a demonstration by the Taliban of their power to subjugate the state. The government of the NWFP has entrapped itself in a situation in which there will be no end to the extortion of power by these militants. They will become more powerful each time their demands are acceded and the people rendered more insecure and helpless. This deal with the militants may have brought about a ‘ceasefire’ but does not bode well for any sustainable peace or for justice for the troubled population of these areas. It has only set a dangerous precedent for other extremist groups looking for similar opportunities in other parts of the country.