That Karachi’s own film festival hit the screen once again is a minor miracle. With sponsors pulling out, security issues and a shortage of manpower, it was touch and go for a while, but the determination and commitment of the organisers won the day. The effort was spearheaded by Festival Director Hasan Zaidi, committee members Maheen Zia and Tahera Hasan, backed by a team of enthusiastic volunteers.

Fun-and film-starved audiences made a beeline for the Arts Council, Karachi, the main venue for the 7th Kara, aptly titled Satrangi Re. While the biggest crowds predictably turned out for the features, there was a respectable showing at the documentary and short film screenings.

On the downside, there were two years worth of films waiting, while the available screening time had been slashed to half, leaving much unshown.

The festival kicked off with the Italian feature Galantuomini. Directed by Edoardo Winspeare, the film depends on fast-paced action and stellar performances by its two protagonists, Donatella Finocchario and Fabrizio Gifuni. The producer, Fabrizio Mosca, in Karachi for the festival, had another film to show, this one directed by Emanuele Crialese. Nuovomondo(The Golden Door) is a cinematic tour de force and one of the highlights of the festival was the opportunity to watch this visually intriguing and extremely powerful film on the big screen.

Nuovomondo is a lyrical film that explores the potential of the medium with great skill and sensitivity. Set at the beginning of the 20th century in Sicily, it is the story of impoverished peasants aspiring to a better life across the waters. A complex, layered story unfolds amidst the brooding light that colours the film. The farmer Salvatore sets off with his aged mother and other members of the family for New York. En route, Salvatore has a strange encounter with a British woman on the lookout for a husband. Other members of the family struggle with a series of tests administered by immigration authorities at Ellis Island, the port of landing. The film’s social commentary is strong without being strident. The director, Emanuele Crialese, was present at the screening along with the producer. Crialese pointed out that while Italy now tries to restrict the entry of outsiders, it overlooks a time when its own citizens knocked at alien doors, in search of a better life.

The features at Kara, this time around, were not restricted to films on the festival circuit. Thus Mamma Mia, a rollicking musical with Abba songs, rubbed shoulders with Iranian cinema and the classic films of Ingmar Bergman. Bangladesh was represented by the award-winning director Abu Sayeed’s Nirontor and the Pakistani segment included Khuda Kay Liye, Burnes Road Ki Nilofer and Victoria Ka Ticket.

The fare from India ranged from the somewhat patchy Chaurahen to the impressively constructed Firaaq.Chaurahen’s director, Rajshree Ojha trained at the American Film Institute (AFI) and has won the AFI Spirit of Excellence award for Outstanding Direction. For all that, her feature fails to convince. While the cinematography is competent enough, the film lumbers along, hampered by a script that swings between the sentimental and the outright maudlin.

Firaaq, in contrast, is a striking directorial debut by Nandita Das. The film revolves around the aftermath of the Gujarat riots of 2002. Except for the opening sequence, where bodies tumble out of a truck into a common grave, the film eschews blood and gore to opt for a subtle probing of the wounds left behind by mob violence. WhileFiraaq highlights the human bonds that transcend religious moorings, it does not downplay the continuing threat posed by Hindu fundamentalists to the Muslim community. The film is well lighted and shot. Smooth performances and a coherent script add to the flow of the story. It is a courageous film to make and Nandita’s decision to show it in Pakistan was even more courageous. Firaaq won the best film award at Kara. In a carefully worded disclaimer, the jury stated that the ‘political’ considerations associated with the film had nothing to do with the award. However, they are hard, if not impossible to separate from the inherent value of the film. 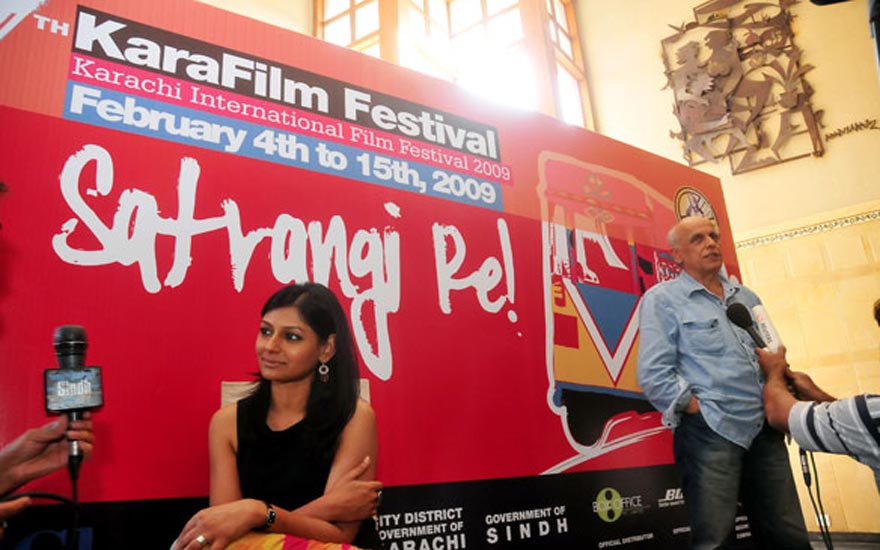 Documentaries from or about the subcontinent often focus on issues related to marriage, gender discrimination and violence against women. The 7th Kara screened a number of films on these themes. Some filmmakers, however, chose the path less travelled. Among them was Mahera Omar with Adventures in Hingol, documenting the exploits of a fun loving bunch of offroaders in Balochistan, while Brahmanand Singh’s Pancham Unmixedtook a loving look at the life and times of composer R.D. Burman.

The Superman of Malagaon is a delightful film that shared the Best Documentary Award with Kesan Lapsi from Finland. It follows a bunch of guerrilla filmmakers around as they attempt to make their own foray into film, in a small town just around the corner from the glamour and glitz of Bollywood.

Snow Leopard: Beyond the Myth was another doc with a difference. It is a visually stunning account of the rare snow leopard, tracked by an extremely persistent film team through its natural habitat in Chitral. Masterful camera work, smooth editing and powerful narration hold one’s attention all through the film. Nisar Malik, the journalist and producer who facilitated the production, attended the festival and shared with the audience his disappointment at the fact that the film failed to arouse any interest among Pakistani channels while it has been dubbed into Hindi for the Discovery Channel in India.

A doc segment that sparked off a heated discussion featured Nameera Ahmed’s Askini Ver Bana, Muhammed Imran’s Sheedis: Roots, Traditions and Misgivings and Naveen Qayyum’s Talking Faith. Naveen opens up a window into the life of the Christian community in Lahore while Askini explores the mystical tradition of the Mevlevis in Turkey. All three directors faced a barrage of questions from the audience, with Kara volunteer Adnan Malik keeping the discussion on track.

Short films provide a creative space for filmmakers and there was a diverse bunch of films to be viewed in this category. The filmmaker’s personal vision is the driving force behind this segment, and that makes for interesting viewing.
The short films from Europe were often playful, exploring the nuances of sound and vision, sometimes with little narrative content. Others probed disturbing issues sensitively. Contracuerpo, for instance, is an ingenious exploration of the concept of body image. There were also the simply fanciful, such as I Like the Sound of your Heavy Breathing by Korean director Si Young Choi. Among a plethora of contenders, Maheen Zia’s Match Factor— a film shot in Germany as an outcome of the Berlinale Talent Campus — won the award for Best Live Action Short Film. Even Pigeons go to Heaven from France and Sam by Pakistan’s Meezan Ali Mir shared the award in the Animated Short category.

All in all, rich fare again for the film buff, leaving us counting the days till the next Kara.