Even two near-death experiences while swimming could not keep Rosheen Khan away from the water. Determined to explore, and fascinated by, the underwater, Rosheen knew that she had to try out scuba diving when she came across an advertisement for the Karachi Scuba Diving Centre (KSDC). Six years have passed since that first dive at Beauchamp Reef, off the coast of Balochistan, and Rosheen, 26, is now the first female scuba diving instructor in the country. Not only that, but she is also certified in rescue operations and first aid.

Even after she nearly drowned twice in the swimming pool during her college years, the first time Rosheen went scuba diving, she still didn’t know how to swim. But she wasn’t the least bit scared. In fact, it was quite the opposite. “I felt like I was flying. When I came up on the surface, I was a new Rosheen,” she says with a smile, reminiscing about her first dive.

All it took was one dive and Rosheen was hooked. “I can’t even begin to tell you how beautiful it is. Such beautiful coral, colourful fish, sea snakes and really, so much more” says Rosheen, rattling off a list of diving spots in the region and the different species found in the Arabian Sea. According to Rosheen, not many realise the extent of underwater beauty in Pakistan, something that could actually be a major tourist attraction. “Given the situation, even when foreigners do go diving with us, we cannot disclose who they are and when we go. It’s not safe anymore,” she added.

The tsunami in 2004 caused massive destruction to the coral reefs and the rest of the underwater world in the Indian Ocean. Except for the area around Churna Island, located off the coast of Balochistan. Barely one kilometre in size, the area around the island has stunning corals. In fact, according to Rosheen, it’s perfect for snorkeling as well. “What’s happened here is that the larvae from the surrounding coral region has shifted and settled in around Churna Island. And surprisingly, it’s growing at an unexpectedly fast rate — faster than it’s normal growth rate,” says Rosheen, who has been conducting research in collaboration with Yousuf Ali, the master instructor.

What a lot of people also don’t know is that during the winter months, the sea is home to dolphins and yes, even some species of whales. And Rosheen has witnessed this first-hand. “The first time I saw a whale, it was phenomenal. Yes, I was scared, but also extremely fascinated,” says Rosheen. 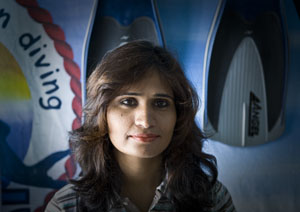 Rosheen Khan says that night diving is a great experience.

But more than daytime diving, it’s actually night diving that Rosheen enjoys and has taken specialised courses in. According to her, night diving is an entirely different experience and certainly more exciting. “We have flashlights and special torches so visibility isn’t even an issue. At night, you see a very different kind of activity. A lot of the sea creatures are nocturnal, so you see a whole new world,” adds Rosheen.

A shutterbug, Rosheen also signed up for an underwater photography course with the KSDC and is now their resident photographer. So far, she has taken hundreds of pictures and has also made videos of the underwater world. “When I first went diving, I knew I had to take pictures. That’s also one of the major reasons why I loved diving from day one,” adds Rosheen.

One question that’s been on my mind since the beginning of this interview is whether people, especially men, are comfortable learning scuba diving from a female instructor. Rosheen laughs when I ask her this. “The men were not comfortable at all. You know how their egos can be. They think they can figure it out on their own, but the second they feel that they’re drowning they’re always quick to grab my arm,” says Rosheen. “But I feel like it has gotten slightly better in the past couple of years. I think it’s because I’ve been doing this for the last six years and now, people know me.”

Rosheen belongs to a conservative Baloch family and knew they wouldn’t be too happy to know about her career choice. So she secretly took swimming and diving lessons, and it wasn’t until six or seven months later, when she gave an interview to a local paper, that her family discovered her secret. But it seems that nothing really could keep her away from the water. She now lives in Karachi, goes diving every Sunday, is teaching her first group of students and according to her, “living the dream.”