Unjela Siddiqi is living proof that a woman can combine a successful corporate career with a healthy family life.

Unjela Siddiqi is a woman at peace with herself. Two minutes into the conversation with the first female secretary general of the Overseas Investors Chamber of Commerce and Industry (OICCI), it strikes you that Unjela exudes no discernible pretentiousness in holding a high-rank executive post. Instead, a quiet confidence grounds her. She is as amiable in person as she sounds intimidating over the phone.

Unjela began her career at Newsline in 1994, where she says the mentoring she received under its editors is with her till today. She moved to London after a year, where she worked with the BBC on a sports news programme. Then, it was back to Pakistan where she joined the World Bank in Islamabad for almost three years. When she and her husband, journalist Kamal Siddiqi, decided to start a family, they moved back home to Karachi, where Unjela joined Dow Jones as a money market reporter.

Unjela’s resumÃ© is long and weighty and she humbly attributes her achievements to the support of every one around her, who made it possible for her to get to where she is today.

Maintaining this high pressure and immensely demanding job at the OICCI, Unjela initially looked upon the task sceptically, but her hard work and time-management skills paid off. After all, in the institution’s 150 years of functioning, Unjela holds the claim-to-fame of being appointed the first woman to head the Chamber of Commerce in South Asia. Surely she was under scrutiny and suspicion while she was rising to acclaim in the corporate world. To this she admits, “Yes, I used to get [a reaction] initially. People used to be very shocked and the shock would be on their faces … People would open the door [to my office] and just stand there for a few seconds, and I would say: ‘Yes I’m the secretary general. Please come in.’ Then, of course, two seconds into the conversation they would know that I may not look [like one] but I know what I’m talking about.” 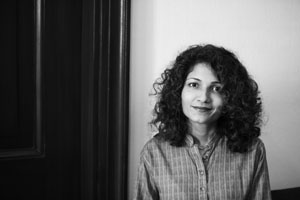 Unjela strongly believes that once you can prove your competency and can deliver, no matter what field you are working in, you will gain the respect and approval of your colleagues and you will not be afflicted with gender-biased judgment. Furthermore, she feels that “it is time for the women workforce to come forward and contribute towards our country.” Whereas one can count the women CEOs in Pakistan on their fingertips, Unjela sees the greener side and suggests that times have changed. She recalls, “In 1995 I was one of the few management cadre officers to be hired by the World Bank. But now when I go back to the World Bank, I see so many women in the management cadre. So there definitely is a change.” Promoting gender balance among her own staff at OICCI, she has incorporated women personnel to equate their ratio to that of the men. She noticed, upon coming on board the organisation, that the staff had only one woman who was working as PA to the secretary general. Now when one walks into the grandiose building, the change is evident. It’s all about creating healthy workplace dynamics, as Unjela concludes, “I would have done the same thing if there were not enough males.”

Assuming this position of power put a burden on the conscientious Unjela, as she was painfully aware of living up to many expectations. “You have been appointed with so many expectations, [there is] so much that has been placed on you, that you are the first woman [in this post] and if you don’t perform, imagine the kind of shame and disgrace you would cause — and disappointment with yourself — after having been given that opportunity.”

“As Pakistanis we should take pride in the fact that we have quite a few firsts to our name [such as] the first governor of the state bank, the first prime minister … We should be proud of the fact that in our part of the world there are women who reach the top through their competency.”

Unjela’s aim is to bring more and more members of the investors board to contribute toward a betterment of the country’s machinery. A large percentage of the members contribute towards the education, health and environment sectors, as well as disaster and relief management. Primary education and skill development, in her view, will enable women from underprivileged classes to come forward into South Asia’s competitive domain. “I would want Pakistan to be competing with Sri Lanka, for example where housemaids are needed. If India, Bangladesh and Sri Lanka are competing with each other why can’t Pakistan? At one point, PIA used to have an airhostess training school and they used to provide female hostesses to all the international airlines. Now India has captured that market. So why is
Pakistan not investing in that market? We have a good size of skilled population.”

With a clear head and focused approach to life, Unjela’s pride is not restricted to her professional accomplishments. She is a keen and devoted mother of two children and it seems the labour of love to her is effortless. “I have never missed any of my kids’ school events, or any report day, even my daughter has presentations every month and we [the parents] make sure that both of us are there.” The smiles on her “two healthy, happy kids,” and her longstanding relationship of interdependence with her husband gives her a deep satisfaction from life.

Unjela’s advice to young women starting their careers is: “Work hard. Maintain humility, the ability to learn and adapt to ideas and advice. And of course, don’t doubt yourself, provided you maintain the right balance.”