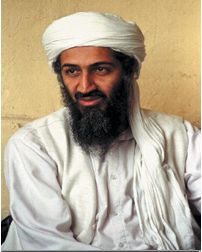 A tangible new lead on Osama bin Laden’s presence in an area along the Pakistan-Afghanistan border has led to a renewed and more rigorous manhunt for him.

It was the second week of February when George Tenet, the Director-General CIA, made an unpublicised visit to Islamabad to discuss with Pakistani leaders a new strategy to trap the elusive Al-Qaeda leader.

The new plan involved a two-pronged ” hammer and anvil” operation, with the launching of simultaneous offensives by the US forces in Afghanistan and Pakistani forces on the other side of the border. The approach is aimed at driving the militants towards each other and destroying them. A special US task force of covert commando teams and CIA officials who had been involved in the arrest of Saddam Hussein in Iraq was also shifted to Afghanistan to bolster the campaign.

President Musharraf appeared more willing to help the United States track down bin Laden after he narrowly escaped two assassination attempts involving Al-Qaeda and its allies among Pakistani Islamic militants. Most analysts agree that the capture of bin Laden and his deputy, Aiman al Zawahiri, has become a life-and-death issue for the military leader. The two had repeatedly called for Musharraf’s head, declaring him a lackey of America and an enemy of Islam. He became the main Al-Qaeda target after he handed over hundreds of militants to America.

What is more worrisome for Musharraf is the suspicion that Islamic militants have penetrated the military and intelligence agencies and might have been involved in the assassination plot. Alongside, he has to assure the Bush administration of his total cooperation, as Pakistan becomes the focal point of the nuclear proliferation scandal. The general is under pressure to deliver on bin Laden after pardoning Abdul Qadeer Khan for illegally selling nuclear technology to Iran, Libya and North Korea. His decision not to put the father of Pakistan’s nuclear bomb on trial has largely been dictated by domestic political compulsions, but it has not gone down well with the international community.

The major focus of both the US and Pakistani forces is now on dismantling bin Laden’s support network. This approach centres on greater reliance on human intelligence and a quick response on tip-offs. Pakistani military officials maintain that their forces are now better equipped to carry out the task. A large number of CIA operatives and some US military personnel are assisting in the campaign, but President Musharraf is not prepared to allow the US military into the highly sensitive tribal region. Pakistani officials contend that the presence of foreign troops could further fuel an already explosive situation in the area.

It has taken Pakistan more than two years to build the capacity to launch a swift operation in the treacherous terrain which became a sanctuary for bin Laden and Al-Qaeda fighters. It was the first time that Pakistani forces entered a fiercely autonomous tribal region and set up monitoring posts along the mountainous routes. “No country can create that capacity overnight in such an inhospitable area,” contends a senior Pakistani official.

Faced with tough resistance from pro-Taliban Pasthun tribesmen, it was not easy for the military to seal off the 1500-mile-long porous border and comb a largely inaccessible terrain. For more than two decades, since the resistance against the former Soviet occupation forces in Afghanistan in the 1980s, the tribal area in the NWFP has been used by bin Laden and other Arab militants as a base.

The routing of the Taliban regime in Afghanistan by the US-led coalition forces in December forced hundreds of Al-Qaeda men to take sanctuary among the sympathetic tribesmen. Many others escaped to Iran and other Middle Eastern countries. But bin Laden and Mullah Omar, the former Taliban supreme commander, remained elusive.

Currently, Pakistan has deployed more than 70,000 forces to monitor its 1500-mile-long border. The troops set up more than 1000 check posts — a post after every 1.5 miles. The step helped check the cross-border movement of the militants.

Pakistan and the US have poured millions of pounds into development work in the area in an attempt to win the hearts and minds of the tribesmen. For the first time, roads, hospitals and schools have been built in remote areas where the writ of the Pakistani government was limited.

The opening up of the tribal region and its gradual integration with other parts of the country has helped the Pakistan army create a human intelligence network that has proved invaluable in gathering crucial information about the terrorist hideouts and their movements along the border. During the past two years, bin Laden and his close associates escaped capture many times as Pakistani forces did not have the capacity to act swiftly. “The war on terrorism is an intelligence war and not a military one,” says a senior Pakistani military officer.

During this period, Pakistan, with the help of the United States, raised a commando-based Special Operations Task Force( SOTF) for swift action on intelligence information gathered both through human as well as electronic intelligence. Pakistani authorities attribute two successful operations in Waziristan since October 2003, in which several Al-Qaeda fugitives were killed or captured, to this special force. “We now have all the ingredients in place for more effective operations in the days to come,” says a senior Pakistani official.

There has also been a marked improvement in the information-gathering by coalition forces on the Afghan side of the border. Electronic and air surveillance has restricted Al-Qaeda’s options. The Pakistan military has adopted a carrot-and-stick policy in an effort in an effort to destroy Al-Qaeda’s support network . In the latest operation in Waziristan, Pakistani security forces arrested several women married to the foreign fighters in the hope that they would provide leads to the possible whereabouts of bin Laden. In addition, they destroyed the houses of those tribesmen suspected of sheltering Al-Qaeda fugitives. Pakistani officials said the move has worked well towards providing some valuable information that could help them close in on one of the world’s most wanted men.