“There are no suspects or wanted elements here” 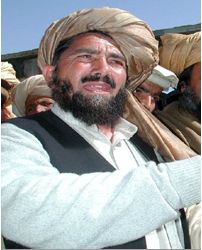 Q: What are your views on the government’s operation in South Waziristan?

A: Not a single foreigner has been arrested in the army’s entire operation in South Waziristan. The army demolished the tribesmen’s houses, even though there was no proof of the presence of suspects. Twelve passengers were martyred in the firing on a passenger vehicle. They were residents of our area. The government has admitted its mistake in this case. This proves that the entire operation is senseless. Whatever proof they have offered is against people who have been residing in the area for 23 years.

Q: What are the implications of the killing of 12 tribesmen by law-enforcement agencies in Wana?

A: The tribesmen welcomed the army when it entered South Waziristan. The army should have dealt with the situation sagaciously and solved the problem in a peaceful manner, so that things could have improved. We know our area and the people. There are no suspects or wanted elements here. Locals have been taken into custody. This is creating a bad impression and will have its consequences. Harassing the people will lead to public meetings and demonstrations. Hatred between the army and the people will culminate in opposition and enmity.

Q: Do you think that Pakistan had other options apart from conducting an operation in the tribal areas?

A: Pakistan had a lot of options. The government is playing with the lives of the masses. It is siding with the US. There are several casualties. Many army men have died as well. Pakistan should have told the US that it has a militia force and can control the situation here. It should have employed intelligence, conducted research and weighed its options. Pakistan is self-sufficient and does not need anybody’s help.

Q: Could the United States have intervened, had Pakistan failed to take action?

A: Pakistan should have warned the US that any intervention could result in an uprising. If their brothers are being killed and people are not coming out on the roads, it is because they are acting prudently.

Q: Who is responsible for the current situation in the region?

A: The US. It has 52 states of its own, yet continues to colonise countries around the world. If somebody attacks any one of their states and the residents take up arms against the invaders, they will be called freedom-fighters. However, the US is not willing to concede the same right to others. There were times when people respected the US, but now they hate the Americans. I remember the days when Americans could roam freely in the tribal areas. Now they are more likely to be attacked.

Q: Does the situation in the tribal areas have anything to do with FATA’s special constitutional status?

A: The tribal areas are governed in accordance with their customs and traditions. The laws need certain amendments to bring about an improvement, but this has nothing to do with the current problem.