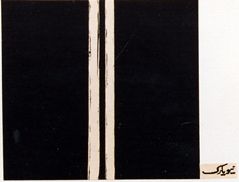 When does an artist decide to cross the line that divides the personal from the political? Probably when the need to tell ‘the other story’ cannot be contained. This need has become even more acute in the environment created by the media of a unipolar world and pressures of accelerated globalisation. New York-based printmaker Zarina Hashmi lived through 9/11, an event that changed the world and lent credence to Huntington’s treatise on the Clash of Civilisations. This much-travelled artist communicates through her work, not only a personal perspective on locations that have made headlines, but reminds us how divergent viewpoints can influence the history of a place.

Constructed in the vocabulary of cartography, the prints in the collection ‘Maps, Homes and Itineraries,’ on show at the Chawkandi Gallery, look beyond physical geography, in a context that can transform a city or a country from a target or flashpoint into an entity pulsating with literature, folklore and recorded history, the very substance a news- breaking story consciously avoids. Locations in conflict, often made faceless in the parlance of modern warfare, resist this onslaught through the narratives constructed in the memory of the dead from the memory of the living. Kabul and Baghdad may be in ruins today, but their legendary pasts are kept alive in music, legends and poetry at chai-khanas. With the law of war becoming indistinguishable from the law of the jungle, forces of hatred and avarice increasingly besiege citadels of cultural vitality. Making stark statements with her woodcuts, Zarina employs a medium previously used by German, Chinese and Mexican artists in the 1920s and 1930s to bring their message of protest to a wider audience.

‘Cities 2003â€² maps Grozny, Sarajevo, Srebrenica, Beirut, Jenin, Baghdad, Kabul, Ahmedabad and New York — settlements under duress. Zarina’s woodcuts show many of these laid out like skeletal remains on a mourning shroud of black cloth. Presented as broken and jagged lines like shards of glass, they are a far cry from their organised existence. These maps, dotted with small spheres, are reminiscent of moving targets that hold survivors in continuous strife. The cities seem to fade into oblivion as lines blur into the silence of cross-hatched near-blankness. Far from the cold mechanical and precise plotting of a mapmaker, these black and white prints with the nuanced line and rich tonalities are visual elegiac offerings of an accomplished printmaker.

The Holy Land, birthplace of three major religions and disputed for over a half century, is represented by two bars of black, bracketed by a column of white. Zarina has no map to offer, but notes down the latitude whilst recognising a significance that transcends political boundaries. 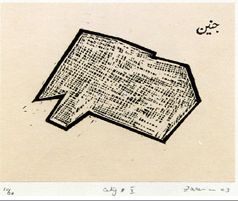 ‘Delhi 2000â€² catalogues personal memories of a city where the artist spent her youth. The layered history of three Delhis — the Mughal city, colonial seat of power and post 1947 metropolis is evoked through a cluster of intersecting roadways which illustrate how the synergy of an accumulated culture vitalises Delhi today.

The three-dimensional representation of the Delhi skyline, evoking changing perspectives from the sky, speaks of encounters measured in years.

Born and educated in pre-Partition India, Zarina invests the maps of The Atlas of My World with the experiences of a people divided in the largest exodus in recent memory. In this series, the map is also an emblem of the emotions of loss that followed the founding of a new nation.

The artist’s New York home is a sanctuary where, far from the urban frenzy, she follows her own pace — working in ancient woodcut techniques. Her changing world, from the trauma of Partition to the alienation of post-9/11America, is portrayed in the maps she creates in her home. The exhibition, Maps, Homes and Itineraries, can be seen as a desire to reclaim space through articulating her memories.

The outcome of her reflective journeys, Zarina’s work evokes deep responses from viewers who can penetrate its encrypted visual sensibility. For them the work is an intellectual place that continues to resonate with familiar references and new meanings