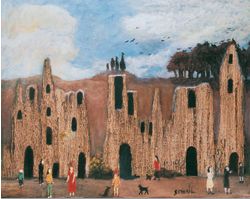 Unravelling an enigma is like taking the fizz out of a carbonated drink — and with a libertine like Tassadaq Sohail, the charm is entirely in the mystery. The eccentric Sohail enjoys a strange sense of freedom — liberated from the conventional cares of this world, he remains a prisoner of his own imagination. The late Ali Imam classified him as one of the few non-derivative painters Pakistan has produced. Very original, but very peculiar, Sohail’s work has always posed questions to which there are seldom any easy answers. A complex symbolist painter, Sohail freely admits that “in symbolism you do not open the symbols — that is the fun of it.” His recent exhibition at Zenaini Art Gallery is a rich outpouring of coded narrative that according to him speaks of “a world within a world.” This concept conforms to a late 19th century movement called Symbolist painting. This was a movement that veered away from painting by observation towards an expression of more subjective intellectual or emotional visions. The symbolists rejected realist conceptions of art that had prevailed in the preceding generation dominated mainly by the Impressionists. They also took inspiration from writers who had turned away from representation of the exterior world towards the inner dream. Emphasis on feeling was through form and colour as well as an unusual juxtaposition of subjects, depiction of unreal allegorical worlds, or startling movements of reality transfigured by extreme distortion. For them a plastic equivalent of emotion or thought was through a corresponding beauty in time and colour. Paul Gauguin is an early symbolist painter and Edvard Munch’s work is a culmination of symbolism and the beginning of German Expression.

Tassadaq Sohail was originally a short story writer and he identifies with the symbolist ethos on a much wider level. His personal favourites, whom he has read widely, include symbolists like Nietzsche, Andre Gide, Richard Wagner etc. It was only when writing in Urdu became a limiting experience that he turned to the visual idiom as another means of expression. In the early ’60s when Sohail migrated to London, it was not his Urdu writing but his unusual paintings that helped him to get established. Today, what he describes as “my pygmy people and my gnomes” is his celebrated signature. They comprise the figurative imagery that populates his work along with a menagerie of birds, cats, serpentine creatures, amphibians, an errant white mule and queer landscapes. Sohail explains that his gnomes are made of stone and they remain stationary. Repetition of gnomic characters symbolises people who live in the past because they are unhappy with the present. Seeking an ideal in an imagined past, Sohail quotes Andre Gide to assert his point of view:

“Let us have chimeras than realities — for the poet’s imagination prefers to dwell on the ideal. Let us have truth that is hidden behind the appearance of things — so that we do not languish in inactive sleep. Man must fill his soul with inspiration.”

For Sohail, this “inspiration” is transmitted onto the canvas through a painterly process peculiarly his own. A gessoed canvas, suitably sandpapered, is layered with an oil medium called liquine, with the help of a palette knife. Different colours of his choice are spread on this surface in an abstract mannerism, just barely blended. He claims, “in this abstraction, I begin to see faces here and there and a beginning is made. If my mind is ripe with ideas, this opening is all I need to take off.” With the help of a palette knife, he scrapes out colour to form his images, unlike the usual impasto technique of adding thick paint with a knife. Another technique common to his work is frottage. In this method, patterns are made from the surface of objects by rubbing them through paper. The rough design is used to stimulate the imagination and hints of form are worked up by drawing and other media.

Tassaduq Sohail was born in Jullundher, but migrated to Lahore in his early teens with his family. In his twenties he headed westwards and settled in London. From the sixties till his return in the late nineties, Sohail grew in stature as a painter. With countless group participations and over three dozen solo shows to his credit abroad as well as annual exhibitions at Indus Gallery from 1977 onwards, Sohail churned out collectible paintings. The current show at Zenaini is in the same vein but the imagery is crowded and packed into windows and cell-like grids — his world is multiplied many times over — giving the viewer an image that is incessant and insistent. Perhaps it is a cry from the heart for he says, “I am not happy, my life has become hell since I arrived here. I haven’t got anybody.”