“I am very allergic to being called ‘exotic’”

Sara Suleri Goodyear is Professor of English at Yale University, the founding editor of The Yale Journal of Criticism and on the editorial board of The Yale Review and Transition. As an academic, her fields of interest are listed as “Romantic and Victorian poetry…Edmund Burke…” and her concerns “postcolonial literatures and theory, contemporary cultural criticism, literature and law, Urdu poetry.”

Ms Suleri was born in Pakistan, grew up in Lahore, graduated from Kinnaird College, did her Masters in English from Punjab University and a doctorate from Indiana University. She encapsulated memories of her Lahore childhood in her creative memoir Meatless Days (1989), at the heart of which were the tragic accidents that killed her mother and sister. Furthermore, as the daughter of the eminent journalist Z.A. Suleri, she observed political events and political opinions being forged from close quarters and wove the story of Pakistan into her narrative. The book was remarkable for the quality of Suleri’s prose and her use of metaphor to define chapters, and not only marked an important milestone in Pakistani English literature, but is now one of the classical texts of South Asian English literature. She went on to write a critical work The Rhetoric of English India (1992), a rather complicated work, which explores the way English writing was used to perceive and define the subcontinent, from the rhetoric of Edmund Burke to the fiction of Salman Rushdie. The book also includes discussions on Fanny Parkes, Kipling, E.M. Forster and Naipaul.

She lives between Maine and New Haven and has recently published another accomplished memoir Boys Will Be Boys: A Daughter’s Elegy about her journalist father. In this brief fax interview with Newsline, she answers a few questions about her books. 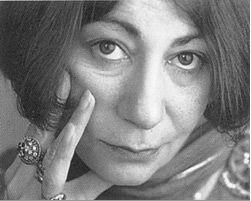 Q: Meatless Days was published in 1989. How did it evolve? Was it clear from the first that it would not be a linear narrative? Did the use of metaphor help you cope with the complexity of emotions?

A: Meatless Days was inherently non-linear. It originated in an essay about my Dadi: having written it, I felt compelled to extend my celebration to other intimates and to Pakistan. Yes, metaphor can ease the strain of grief.

Q: Since the process of writing a memoir is so intensely personal, does it involve a journey of self-discovery?

A: I am not sure that I have discovered anything in terms of “self-discovery.” But I have learned more about language.

Q: Both your memoirs revolve around those you have loved and lost, but are very different. How did you approach them?

A: I was much younger when I wrote Meatless Days and I think my language was more lubricated than it is now. Boys Will Be Boys was far more difficult to write because it is an elegy; I wanted it to be a comic elegy, if that is possible, and to intimate that I loved my father.

Q: In Boys Will Be Boys, you have used Urdu phrases or couplets to define chapters. Is this largely because it was your father’s favourite language or your own response to Urdu?

A: By no means am I a scholar, but my life would not be complete without the ghazal. This has little to do with my father, but simply my love of the poetry.

Q: You have discussed language and linguistic hybridity in the book. Do you find any specific problems with the use of English as a creative vehicle to express an experience of Pakistan?

A: Of course there are linguistic problems. I wish I were truly bilingual, which I am not, and the only language I can write in is English. In Boys Will be Boys, I attempted to honour my love for Urdu in the chapter headings.

Q: Both your books, particularly Boys Will Be Boys, move with great ease between countries and cultures. You are constantly challenging popular western notions of “cultural incompatibility” and “the east-west” divide — embodied by your descriptions of your Welsh mother in Lahore, and your visit to Kipling’s House in Vermont with your American husband. Did you ever suffer any form of cultural conflict?

A: This is a peculiar question. Moving between cultures is never easy. I am very allergic to being called “exotic”. At the same time, I delight in being able to teach texts that would possibly not have been taught at Yale University.

Q: Your critical work, The Rhetoric of English India, explored English writing from Burke in late eighteenth century to Naipaul and Rushdie today. Where do you think South Asian English Literature and particularly Pakistani English Literature are headed?

A: I think that the literature in English emerging from the Indian subcontinent is some of the strongest, the finest. We should have no doubt about that, or the future of its texts. The best moment for me concerning The Rhetoric of English India was a letter from Edward Said, who generously praised what I had to say about Burke, Kipling and Rushdie, but chastised me for my kindness to Naipaul.