By Dr. Amin ur Rahman | Environment | Published 3 years ago 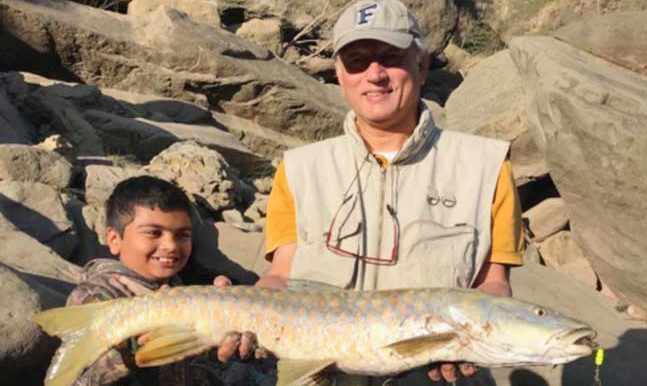 The Jhelum river bends below the high cliffs of Baral Colony and an old Officers’ Mess. Water cascades down the Mangla Dam spillways. On a crisp April morning, before the sun starts to wreak havoc, we climb out of a bus on the bridge under the spillway. Mr Siddiqui, my father’s friend and a teacher by profession, whom I refer to as Master sahib, is teaching us the intricacies of angling.

As we make our way down to the water’s edge, Master sahib gives me a rod and a reel with what he says is a spoon on a 15-pound line. He begins to explain the details of how to cast the spoon just as the rapids stop and the water starts to flow smoothly.

In 1856, a British officer went fishing down the Poonch river – a Jhelum tributary that empties into the Mangla Dam – with the Maharaja of Poonch. The officer hooked onto a monster. Struggling with the line, he asked the Maharaja what fish this was, to which the latter replied: “The tiger of the waters.”

Fast forward to my first encounter. I was a 12-year-old lad in 1968, when Master sahib handed me a rod. Sometime that morning, there was a massive tug on my line and the awesome feeling of some monster pulling it. All I could do was hang on for dear life. Master sahib, encouraged me to let the fish run. It was a Mahseer he said and wouldn’t come easily. I followed his instructions and let the fish play and reel. After 20 minutes of struggle, I got a glimpse of what I was dealing with. The fish was dark on the top and of a golden hue on the sides. This was the Golden Mahseer of the Himalayas. Finally, after a good 30 minutes, I was able to slowly, but surely, land the fish. It was my first Mahseer and I was hooked on to fishing for life.

That night, all I could do was dream of the massive tug that came with the first bite. The next morning, rod and reel in hand, I was at the swimming pool of a tobacco company – where we lived – practicing casting spoons and spinners. School was spent dreaming of my next Mahseer catch, which was not a long time coming. We were back on the river at Mangla, casting away, loosing our spoons and spinners on the rocks, but catching the mighty Mahseer nonetheless.

Tor putitora, or Himalayan Golden Mahseer, was first acknowledged, scientifically, in 1822, by Francis Buchanan Hamilton. It was first mentioned as an angling challenge by the Oriental Sporting Magazine in 1833. The fish was highly sought after by the British administrators in India. Rudyard Kipling wrote of the Mahseer: “Beside whom the Tarpon is a herring.” By 1906, one Murray-Aynsley had caught the first Mahseer, which weighed over a hundred pounds. This was followed by a 119-pounder in 1919, caught by Lieutenant Colonel J. S. Rivett-Carnac. It held the record in India until 1946. The British and the Maharaja had kept the rivers as preserves for sport fishing.

In 1947, however, the concept of conservation took a nosedive with the dawn of Independence.

Nobody in British India had heard of dynamite being used to fish. In India and Pakistan, however, this became the preferred method of getting a meal. As the human population grew, so did the pressure to construct dams to provide electricity. No thought was given to fish conservation, or preservation of animals, forests and the environment. Deforestation, the timber mafia, illegal hunting and fishing, the loss of habitat and wanton killing by illegal means – be it dynamite, electrical shocks or netting – reduced the population of game animals and fish all over India and Pakistan.

The last Mahseer I caught was in 1972. We regularly fished in the waters of Mangla Dam and the rivers leading up to it, but as hard as we tried, no Mahseer was found. The massive tug of the Mahseer, the emotional roller-coaster of not breaking the line, the sheer joy of seeing the fish for the first time and the fish equally shocked at seeing us, slowly became a distant memory.

The beauty of the past, described by an Englishman, became the stuff of history books.

Despite being pressed for time, owing to my many commitments, I always managed to find my way to Mangla dam for a fishing weekend in the summer and for a duck shoot in the winter. We would catch catfish, Singaras and Malis on our rods and reels, but the thought of the Mahseer vanished from memory.

Forty years passed and one day I got a phone call from Dr. Anis ur Rahman, who knew of my interest in angling. He asked if I could come with him for a day, to see how the Mahseer was doing. Dr. Rahman, Mr Zakria and their team formed the Himalayan Wildlife Foundation (HWF) in an attempt to preserve what was left of our wildlife. They started by going to the Deosai plains, a high altitude plateau above Skardu, where they had researched and found the Pakistani brown bear, which had been hunted and was on the verge of extinction. With sheer guts and grit, they dealt with the government’s wildlife and fisheries departments and overcame hurdles, to have the Deosai plains declared a wildlife park. Once an area is declared a wildlife park or refuge, no hunting or fishing is allowed, thus preserving the natural habitat of the animals living there.

The brown bears in this region, which had numbered in the hundreds, had been reduced to about 10 owing to hunting. Slowly but surely, with help from the Kruger National Park in South Africa and specialists from the US wildlife department and through sheer will, the HWF managed to control the population of bears, which almost quadrupled in a decade and is currently on the rise.

The phone call made me rethink my fishing priorities. Although I had caught a Mahseer decades earlier, the sheer joy of hooking a powerful fish made me want to go. Kotli is one of the bigger cities of Azad Kashmir and lies on the left bank of the Poonch river. The river was a regular fishing spot for the Mahseer in the days of the Raj.

The drive to the Poonch river from Islamabad takes one through fields and rolling hills of green and through Sihala and the famous Kahuta area. After a good three-hour drive, we reached Kotli city and then drove up to Tinda rest house, located on a mountain-top. It offers breathtaking panoramic views.

During dinner, local fishermen told us tales of Mahseer fishing that made for a very disturbed sleep. We were up early and on the river before the sun came up. Not a single bite that morning. The afternoon was spent recuperating. We were back at the river in the evening, casting our lines in the murky waters. It was June and the locals informed us that this was not the best time as the rains and snow melt had muddied the water. The sound of the muezzin, reciting the call to prayers, told us that fishing was coming to an end for the day.