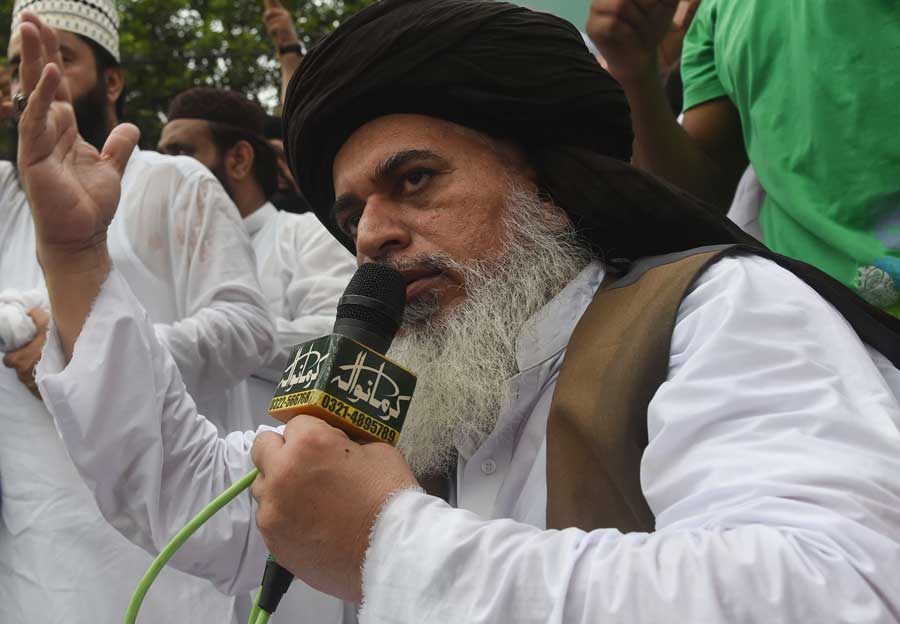 The Tehreek-e-Labbaik Pakistan (TLP) won a total of 2.2 million votes in the July 25 polls. This was nearly half of the Islamist vote bank – having doubled the since the 2013 elections. The TLP is, in other words, the fifth-most popular party in the country.

It could not, however, bag any seats, despite winning almost two million votes in Punjab alone. The party leadership attributes this to ‘massive rigging’ in the elections. However, they remain unclear as to who rigged the elections. Even so, the party is gearing up for nationwide by-elections, hoping to get off the mark with the National Assembly count. The TLP feels further strengthened by recent developments which the party leadership touts as its own triumphs.

The first among these was the cancellation of the blasphemous cartoon competition in the Netherlands by Dutch lawmaker Geert Wilders, against which the TLP had organised a protest rally. The second was the government backtracking on its decision to appoint Dr Atif Mian to the Economic Advisory Council (EAC), following a backlash in the country over the economist’s Ahmadi identity.

“We’re only trying to uphold the Constitution of Pakistan,” says TLP spokesman Ijaz Ashrafi. “What is Pakistan’s full name? The Islamic Republic of Pakistan. If you don’t want Islamic supremacy then take the word Islamic out of it. Otherwise do what Islam asks you to do.”

Anti-Ahmadi rhetoric has been an integral feature of the TLP since its inception as a pressure group formed to prevent Mumtaz Qadri from being sentenced to death for the murder of Salmaan Taseer. It was founded on August 1, 2015, as 75 founding members pledged allegiance to Khadim Hussain Rizvi in Karachi’s Nishtar Park.

The TLP has taken a radical position against blasphemy, portraying Mumtaz Qadri as its spiritual guide. His image has been a fixture in the party’s banners in all the elections it has contested. Its central demand has been the enforcement of the blasphemy law and the execution of those found guilty of insulting Islam.

The Rizvi-led group has espoused murderous views against the Ahmadi community. Last year, it held the country’s capital hostage to reverse the amendments in the Election Reforms Bill 2017, in which discriminatory clauses against Ahmadis had allegedly been omitted. 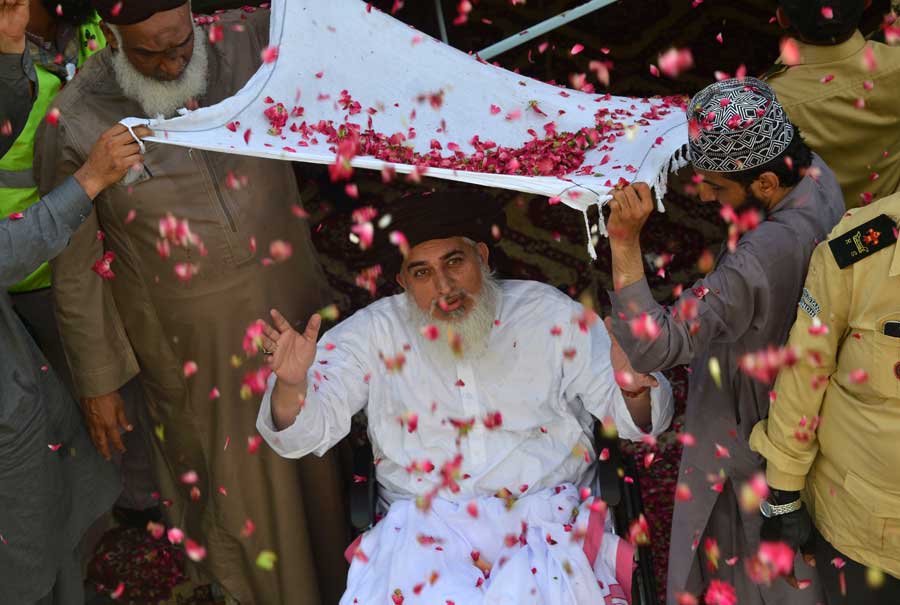 Being showered with rose petals in Karachi.

According to TLP spokesperson, Pir Ijaz Ashrafi, by successfully orchestrating the removal of Dr Atif Mian from the Economic Advisory Council, the TLP upheld the Constitution.

“[Mian’s] beliefs and work for his jamaat and his tweets clearly clash with the Constitution of Pakistan,” says Ashrafi. “How can someone who rejects the Constitution be a part of any government body?”

“Ahmadis should accept that they are non-Muslims and know their place,” he continues. “There are so many Christians and Hindus who are in official positions – how many have we protested against? [Rana] Bhagwandas was the Chief Justice of the Supreme Court. Nobody protested against him, because he was honest about the fact that he’s a Hindu and did not deceive anyone.”

The Constitution of Pakistan ‘officially’ excommunicates the Ahmadis, while the Penal Code outlaws the community from “posing as Muslims.” Given that the sect’s beliefs are deemed blasphemous, the fact that the Pakistani Constitution upholds capital punishment for blasphemy means that the Ahmadis are constantly under the threat of violence. In August, an Ahmadi place of worship was set ablaze near Faisalabad.

The TLP is hoping that the prevailing anti-Ahmadi sentiment in the country will propel the party towards greater electoral gains. The party has also found sympathisers in local media houses, which helps the group spread its ideology, with any dissenting voices censored or threatened.

When the September 6 Defence Day supplement of Nawai Waqt carried an ad paying tribute to Ahmadi soldiers who lost their lives fighting for Pakistan, all hell broke loose. The backlash was led by the TLP, with the party especially outraged by the fact that an ad sponsored by the Ahmadi community was published right underneath TLP’s half-page advertisement.

“We wanted to pay tribute to the Ahmadi martyrs on Defence Day. The ad shows the recipients of Nishan-e-Haider on top and on the bottom there are those Ahmadi soldiers who gave their life for Pakistan,” says Amir Mehmood, who is in charge of the Ahmadiyya community’s press office.

Following the backlash, Nawai Waqt removed the ad from its online edition, and issued an apology on Twitter and Waqt News. The media house also summoned more police personnel, considering the threats they were facing.

Mehmood is disappointed by the backlash. “Doesn’t the army declare Ahmadis as martyrs?” he asks. “Didn’t General Iftikhar Janjua get the Hilal-e-Jurrat? Didn’t General Akhtar Malik get the Sitara-e-Jurrat? The army and the government of Pakistan honoured them. So if those pictures were shared with the masses, what’s wrong with that?”

Later, Chaudhry tweeted that, “the government wants to go forward in unison with religious scholars and social classes. And if [Atif Mian’s] appointment creates a different impression, it is inappropriate.” 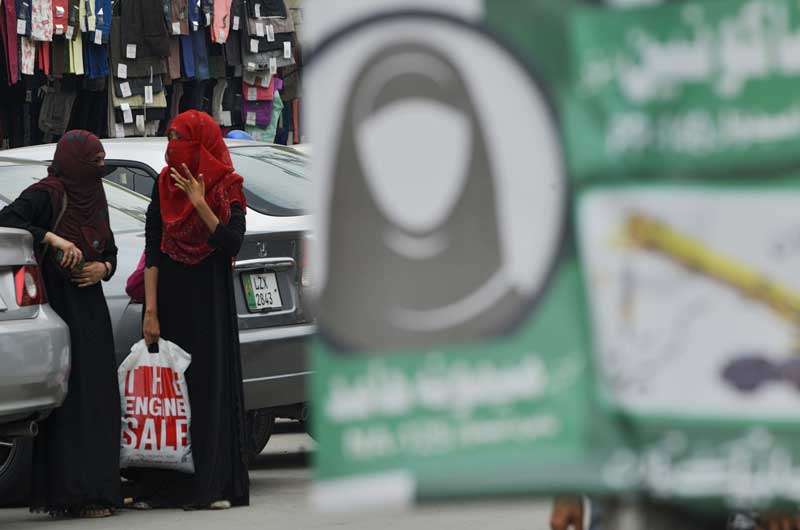 Veils of conservatism: Women stand near a TLP election poster depicting a woman in a hijab.

Lawyer, politician and human rights activist, Jibran Nasir, feels the government succumbed to the TLP too easily. “The government has to take a lot of things into consideration. But the issue is that they capitulated even though there was no real pressure put on them,” he says.

“Faizabad wasn’t choked for three weeks, no federal minister was shot or injured, no minister was hit with shoes at the airport, no minister’s house was targeted… these were among the things that the PML-N was targeted with, following which they struck the agreement. The current government couldn’t even stand four tweets?” he asks.

“There was more internal pressure than external. Because in this party, there is also Ali Mohammad Khan, who plays the ‘Qadiani conspiracy’ card, and Fayyaz ul Hassan Chohan, among others.”

Former Foreign Minister, Khurshid Kasuri, advises the government to approach the Organisation of Islamic Cooperation (OIC) for a unified policy on blasphemy and global anti-Islam competitions, which he feels would help address radicalism domestically as well.

“The cancellation of the blasphemous cartoon competition was definitely a diplomatic triumph for Pakistan. But the government should take up the matter with the OIC so that a unified strategy can be formulated and so that the Muslim world can take it up together, at the international level,” he says.

Kasuri also feels that the issue of blasphemy has a stronger backlash in Pakistan because of this region’s history. “This is where the Ahmadi movement started and this is the region where the legacy of Ghazi Ilam Din is also celebrated,” he says.

Even so, Ijaz Ashrafi maintains that the TLP deserves full credit for the cancellation of the blasphemous cartoon competition and Dr Atif Mian’s removal. “Since it’s inception we have had a string of victories. The PML-N government had to agree to our demands in the [Election Reforms Bill]. The participation in the election and the number of votes we got was another win. So is overturning the mosque loudspeaker ban in Punjab,” he says.

Ashrafi says the TLP will continue to strive to safeguard Islam, the ideology of Pakistan and Khatm-e-Nabuwwat [finality of prophethood]. “The moment the rulers err, the TLP will pounce on it and generate noise against it, because we are on the righteous path. The government had to backtrack [from its appointment of Dr Atif Mian] because the Quran says that the righteous always win, which is why we won,” he adds.

Amir Mehmood says that Ahmadis will always be ready to offer their services to Pakistan. “The founder of Pakistan, Quaid-e-Azam Muhammad Ali Jinnah had envisioned a tolerant country,” he says. “He appointed Sir Zafarullah Khan as his foreign minister and in the boundary commission. Pakistan’s founders obviously recognised the Ahmadis’ potential and utilised them for the country… Jinnah’s vision.”