Ismail walks around the city; a child buying ice cream and leaning on his mother’s shoulders gets his attention; he begins to think about how happy his days once were, until “they bombed the village.” All too soon the trip down memory lane is over. He rips the protective casing from the button, closes his eyes and punches it hard. Ismail is not one of the lead characters in Awais Khan’s story, but his actions set the stage for the protagonists to meet.

Ali, a young man when introduced to the reader, is living a life of poverty. However, it wasn’t always like this. A former model Ali was riding high until the celebrity lifestyle – sex, drugs and alcohol – caught up with him; leaving behind the glamour of the fashion industry, he now struggles to make ends meet. Mona, wife of construction magnate Bilal, lives a luxurious but empty life. She is in a loveless marriage with a man who, much like the average Pakistani male, sees no problem with physically hurting his wife if the situation calls for it. Ali and Mona’s worlds collide when the former is forced to take up modelling again after his brother is severely injured in a bomb attack, and Mona meets up with an old friend, a socialite who takes the lonely housewife to the notorious parties where any rules seldom apply. 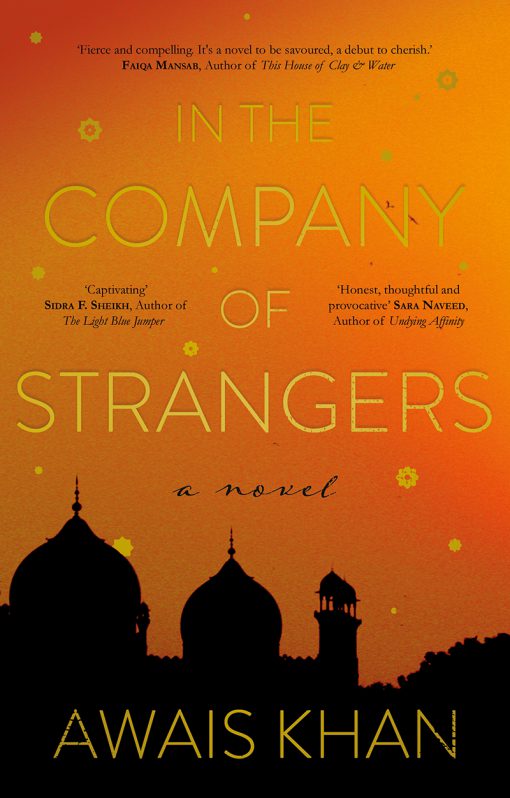 The chapters in the novel are intelligently placed and alternate between Mona and Ali’s perspectives, and while there are stark differences in the lives they live, one feels a connect between the two even before they are introduced to each other; evidently, loneliness does not see social class. A thriller and a love story the novel is a detailed exploration of the complexities of Lahore’s high society, what goes behind closed doors and how the most seemingly happy people are, in fact, the most lonely of the lot.

However compelling it might be, In the Company of Strangers unfortunately is not an original story. Lately, far too many Pakistani writers have chosen to tie the overarching theme of their stories to terrorism and while it has played an important part in the country’s recent history, it feels all to repetitive. Add to that mix the story of a troubled young boy meeting an older woman in an unhappy marriage and no matter how good the writing, it makes for an uninspiring read. Another problem with the writing is the romanticisation of Mona’s troubled life and how that becomes grounds for cheating: because her husband is involved with other women on the side and is physically abusive, it only makes sense for Mona to seek love outside of her marriage too. Far too often abuse is used as a justification for infidelity instead of exploring the latter as a concept on its own; perhaps it will take male writers another lifetime before they begin to write female characters as more than just victims with a total of three staple personality traits.

In the Company of Strangers is inarguably one of the better books on the subject, but it falls short of being the best. The descriptions are vivid, some of the characters layered and complex and, on the whole, their story is tied together in a decent narrative that makes for a good read the first time around. However, it’s hardly a novel you will find yourself going back to again.