January 2012: the Punjab Institute of Cardiology faced one of this nation’s deadliest public health crises, as near 200 patients succumbed to a mystery illness within the walls of the hospital. The ensuing public and media backlash forced the government of the Punjab province to intervene, samples of the medication given to the patients were sent to the United Kingdom for testing. Local labs were not to be trusted, their results could be manipulated by the government, it was argued. The results of the tests revealed that the anti-hyper-intensive given to the patients, Isotab, had been contaminated with the antimalarial medicine pyrimethamine. The Isotab had been manufactured at Efroze Pharmaceuticals, a major local drug manufacturer based in Karachi.

An ensuing World Health Organi sation (WHO) investigation into Efroze Pharmaceuticals revealed a pervasive disregard for safety standards and quality assurance at the firm’s manufacturing plant. This abdication of best practices resulted in the mixing up of the similar looking barrels containing the two different drugs, a barrel of antimalarial somehow found its way into the Isotab production line. Plant technicians picked up on the missing antimalarial and tried to raise an alarm, upper management either failed or refused to act. The pattern of irresponsibility went beyond Efroze; over a number of inspections, including one not too long before the incident, public authorities took no notice of the poor standards within the company, giving it a clean slate each time.

The case of Efroze and the contaminated Isotab raises several pertinent questions: Why was Efroze given a pass by public inspectors despite its negligence? Why was the Isotab never tested or sampled at any point after it left Efroze? How is it that the upper management at Efroze got away with a paltry fine and the company is once again operational? How widespread is this lack of public and private checks and balances, both here and abroad? 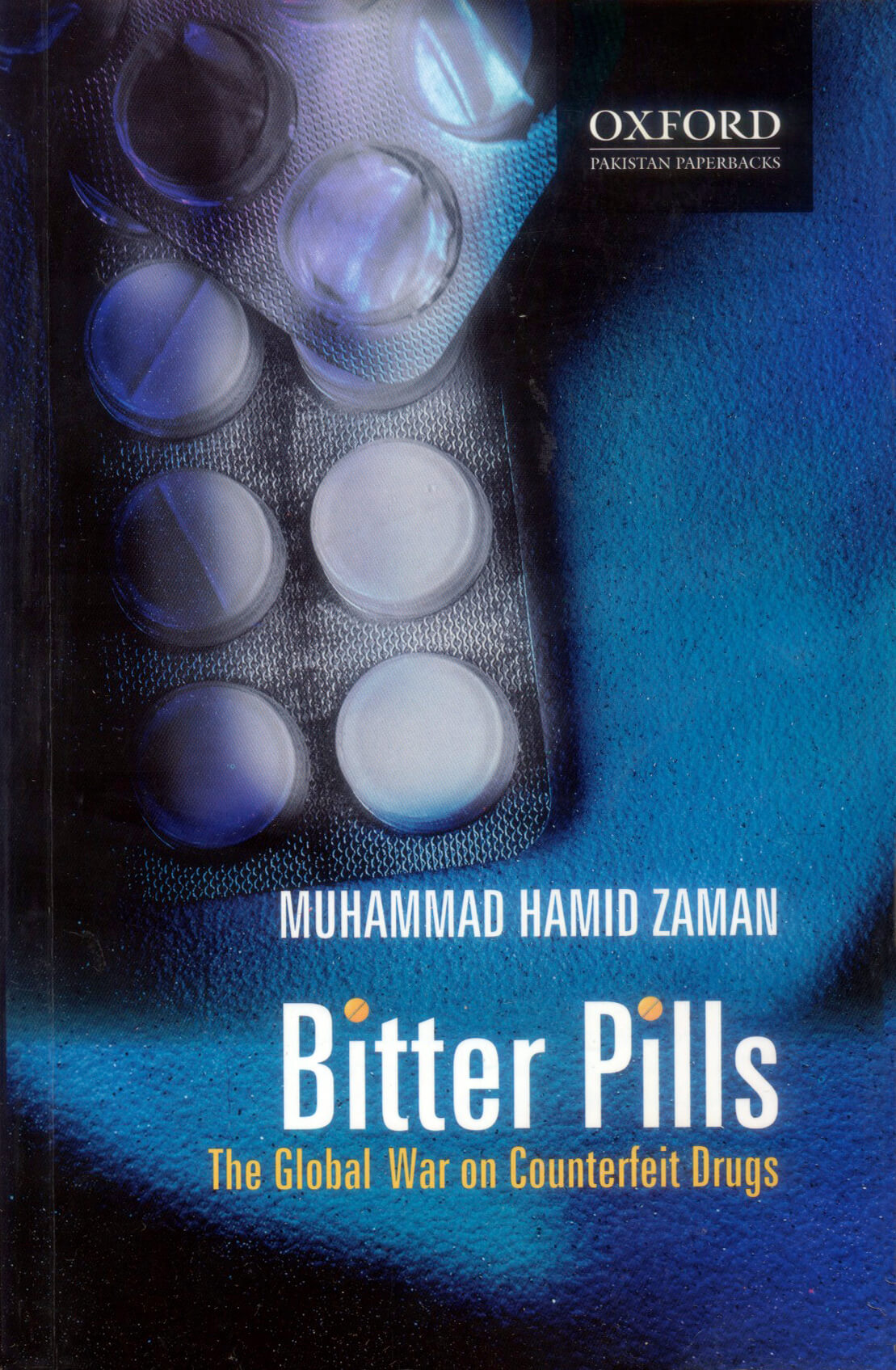 These are some of the queries Muhammad Hamid Zaman’s Bitter Pills seeks to address. Bitter Pills focuses on the phenomenon of substandard and counterfeit drugs, an oft neglected field. Unlike illegal narcotics such as cocaine or heroin, substandard and counterfeit drugs are often near indistinguishable from perfectly legitimate products to the average consumer and are usually marketed and sold as such. The lack of adequate testing and regulation and appropriately trained staff and market pressures to keep costs low means that much of the developing world is acutely vulnerable to the penetration of substandard and counterfeit drugs into the legitimate drug supply. In the worst of cases, these defective drugs can lead to mass poisoning; even when not fatal, they may render good drugs ineffective as a poor-quality drug can create resistance against a good drug, increasing the difficulty of combating infectious diseases such as malaria.

Zaman outlines the structural causes behind this lamentable state of affairs in great depth. At the core lies the inability of public authorities to effectively police the legitimate drug market. Regulatory agencies are understaffed; what manpower they do have is often untrained in the sampling and statistical methods needed to execute their job properly. Pakistan, a country of over 200 million people, has a paltry 24 federal inspectors dedicated to substandard and counterfeit drugs. Unqualified to sample statistically and reliably, inspectors often rely on their own whims when deciding if a drug is fit for consumption. Furthermore, the technology needed to test drugs reliably and consistently is often too expensive for poor countries to obtain in sufficient numbers. What little equipment there is, is often kept in labs lacking the physical infrastructure and technical expertise needed to ensure that they function at an optimal capacity. In many cases poor maintenance by the staff and irregular power and water supply results in the redundancy of these crucial technologies.

Compounding these issues is outdated and dubious regulation that often hamstrings government regulators and prevents offenders from being punished in a manner befitting the seriousness of their crimes. The policing of medical commodities in Pakistan is supposed to be run by the Drug Regulatory Authority of Pakistan (DRAP) in accordance with the Drug Act of 1976. However, the passage of the 18th Amendment to the constitution has turned DRAP into a battleground for competing federal and provincial administrations. This has resulted in a system where federal and state inspectors operate parallel to each other with no standard operating procedures defining how the different inspectors are supposed to conduct and coordinate their activities. Due to the lack of a standard sampling method across provincial and federal agencies, proliferators of bad drugs are hard to track and identify. It is near impossible to estimate how widespread the problem of substandard and counterfeit drugs in Pakistan really is, preventing the implementation of more precise and proactive regulation. Even when a perpetrator, like Efroze, is caught, the Drug Act fails to provide clear guidelines as to who can and cannot be prosecuted and the exact punishment for producing or selling low-quality drugs; hence severe punishments remains elusive.

Pakistan’s predicament is hardly unique among developing countries. In an era of globalised supply chains, major pharmaceutical exporters like China and India have faced increasing scrutiny from the developed world over the adequacy of their drug regulations and manufacturing standards. While one can find trustworthy and upright drug manufacturers in the developing world, a strong emphasis on internal quality control is not the norm in all firms. Far more common is a stubborn resistance to stricter regulations. Mr. G. N. Singh, the top Indian drug regulator, recently remarked that the application of American standards to Indian facilites would shut down almost all local manufacturers, given the costs of compliance. To some extent these concerns are understandable; local manufacturers are, for most in the developing world, the only source of life-saving medicines. Should compliance costs be passed down to the consumers, the poorest and most vulnerable would bear the brunt of the impact.

Though Zaman deserves praise for his detailed and multi-faceted criticism of the efficacy of drug regulations in Pakistan and the developing world at large, one feels that he is fighting an uphill battle in trying to shine a light onto this problem. Firstly, the victims of the scourge of substandard and fake drugs largely consist of the urban and rural poor, who lack the awareness and socio-economic capital to force their elitist governments to insitute meaningful change. Furthermore, Pakistanis in particular, have become numb to reports of government malfeasance and ineptitude over the years, no matter how well argued and researched. Our faith in our government has been hit so hard and so often that further accounts of incompetent administration, overlooking of shady practices and a spineless justice system no longer elicit the attention this problem merits.