An area is being evacuated after a suspicious-looking stuffed satchel is found beneath a construction site, while, nearby a bomb disposal squad member dons his protective gear. Yet, without any headgear he cautiously approaches the dubious bag to examine it with his bare hands for a possible planted bomb. This is the opening scene of the documentary film, Armed with Faith. Its co-director, Asad Faruqi embedded himself with Peshawar’s only bomb disposal squad unit and documented the lives of the courageous men who are at the forefront, battling the dangers of violent terrorism. The film was co-directed by US-based Geeta Gandbhir. 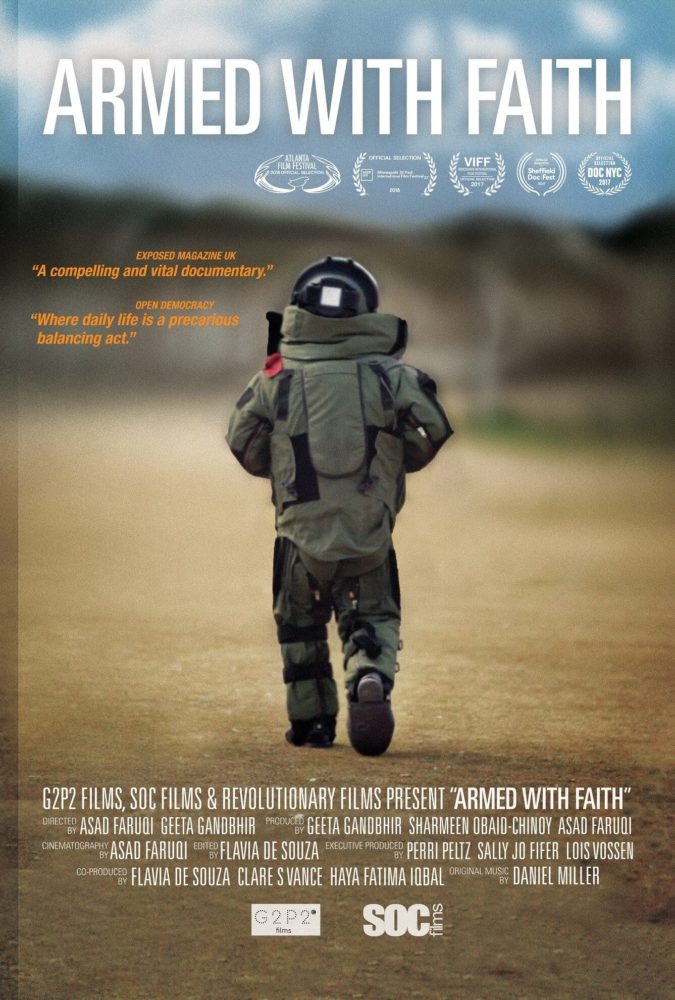 Till recently, Khyber Pakhtunkhawa (KP), particularly Peshawar, were the subject of the most bomb blasts in the country, killing an estimated 50,000 civilians over 15 years. A squad of 34 men, the KPK Bomb Disposal Unit (BDU) is tasked with protecting the area from terrorist blasts that began in the aftermath of 9/11. Fighters or terrorists declared war on Pakistan when the US was given access to its land and air space to fight the war against terror. Fighters based in Pakistan, as well as in Afghanistan, increased their terrorist activities through the years. The porous KP borders with Afghanistan and the particularly difficult mountainous terrain of the region served their purpose, precisely because it was impossible to control.

In the film we are introduced to Shafqat Malik, Commander Bomb Disposal Unit (Peshawar) and two members of his bomb disposal squad. With his experience, the Commander is able to identify the quality of explosives, even those not made in Pakistan. He can also recognise signature explosives of terrorist groups that can later serve as evidence. Abdur Rahim, a BDU officer, clears a graveyard of a village in Peshawar district where people had witnessed suspicious activity. He systematically triggers a buried IED that shakes the ground and belches a cloud of dust and flying shrapnel of a five kg bomb.

BDU’s own vehicles were also attacked and they would become a victim or casualty themselves. Inayatullah “Tiger” Khan lost his leg and fingers stepping on a mine, but continues working for the BDU squad after his rehabilitation. A loving father, he tearfully recalls how painful it was to collect tiny fingers and feet in plastic bags when small children fell victim to a bomb blast in a park. The documentary shares footages that are disturbing reminders of some of the most violent suicide attacks and bomb blasts in Peshawar such as the Qissa Khawani Bazaar blasts and the armed attack on the Army Public School that took place when the city was a hotbed of terrorist activity.

Armed with Faith follows how ill-equipped these men of the bomb disposal unit are for their high risk jobs, and the grisly scenes they have to contend with. And yet they are armed with an unshakeable faith, and infused with zeal to protect the lives of their fellow men, sometimes with their bare hands. The documentary gives a glimpse of their personal lives in which their wives share their constant fears, praying for their husbands’ lives as more than 15 BDU members are killed in the line of duty in a province which serves as a gateway for Al-Qaeda and Taliban operatives.

For a life-threatening job, that too an unrecognised one, the government not only pays them poorly, but also provides them with little specialised equipment for defending a lawless province where the people they are fighting are from among their own. Says Asad Faruqi, “We felt the film could create a greater sense of empathy for the struggle of the people of northern Pakistan and their fight to curb violence…”  While Geeta Gandbhir, the film’s co-director states, “We also hoped people would come away from the film with a strong counterpoint narrative to racist, xenophobic, anti-Muslim sentiments and legislation.”

Co-produced by two-time Academy Award winner, Sharmeen Obaid-Chinoy, Armed with Faith has definitely resonated with international audiences. At the 40th Annual News & Documentary Emmy Awards held on September 24, the documentary film came away with an Emmy in the category of Outstanding Politics and Government Documentary. Perhaps this film will pave the way to provide the brave men of bomb disposal units the compensation or insurance  privileges they so richly deserve.