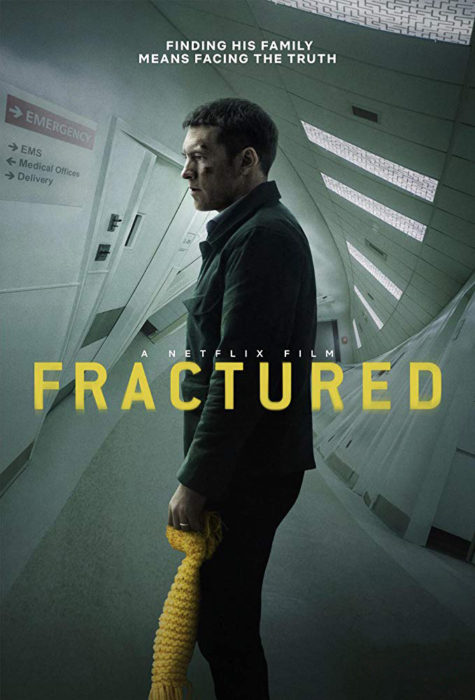 The psychological Netflix thriller, Fractured can leave you quite unsettled and even fearful – of hospitals, even though they are an unavoidable recourse in times of emergencies. On a homebound drive after a particularly unpleasant Thanksgiving holiday with his in-laws, Ray Monroe (Sam Worthington) argues and vents his differences with his wife Joanne (Lily Rabe). Driving through long icy roads and desolate snow-laden landscapes, the young couple is clearly having marital problems. Their six-year-old daughter, Peri (Lucy Capri) requests a potty-break and they stop at a nearby gas station. Director Brad Anderson creates a sense of foreboding even before the lead-up to the opening act.

Desperately trying to keep his frustration under control, Ray momentarily takes his eyes off Peri, while Joanne heads to get something from the store. A seemingly normal situation escalates into a nightmare when Peri wanders off and falls down a nearby pit, ending up with a fractured arm.

After an anxious race to the closest hospital and a maddening wait to get his daughter admitted, the hospital staff finally takes Peri for examination. Nevertheless, Ray finds the attitude of the staff rather odd with their intrusive admission questions, including that of the ER doctor on duty (Stephen Tobolowsky), who comments on Peri’s “most beautiful eyes.” Assured that everything will be taken care of, Ray watches his wife and child take the elevator to the “LL” level of the hospital for Peri’s CAT scan, to check for a possible concussion. Ray settles down in the waiting area and drops off to sleep.

When he awakens, the situation morphs into the surreal as he inquires about his family, only to find that there is no record of them ever having come to the hospital. Also, there has been a complete shift change. As they take his family history all over again, Ray co-operates, giving family details, including the fact that he is a recovering alcoholic and that his first wife was killed in a car accident. But he fails to convince the hospital staff that his daughter was admitted in the hospital and his wife had accompanied her. The only thing that they admit to is that Ray had been treated for a minor head injury.

Worse, Ray is stunned to discover that the radiology department is not located at the lower level, but upstairs on the third floor. Increasingly suspicious and terrified that his family has evaporated without a trace, Ray becomes violently agitated and the hospital personnel are compelled to forcibly administer a strong sedative to calm him down and lock him in a room.

Substantially panicked, Ray refuses to succumb to the effects of the drug and manages to escape, alerting the cops who would hopefully help him find his wife and child. In an interesting twist, from Ray’s perspective, sufficient suspicions are raised in the mind of the audiences that the hospital may be involved in illegal activities, especially since the hospital staff are more co-operative in the face of police questioning. But even then, nobody on hospital duty can recall his family and the footage from cctv cameras seem to support them. Is the hospital hiding something nefarious, or are there more dark revelations in store?