For many years now I have been covering the Maoist insurgency in Nepal. In the latter period of the insurgency, I spent most of my time in Rolpa. I visited this mountainous district in western Nepal many times since 2002 as it was the stronghold of the Communist Party of Nepal (Maoist). After the Maoists launched the anti-government armed struggle, called the People’s War, on February 13, 1996, they made Rolpa and its neighbouring districts their base. Much of the Maoists’ military training and planning was done in Rolpa.

When I first visited the rebels’ ‘capital’ Thabang, situated in north-eastern Rolpa, as the first non-Maoist journalist in March 2003, I was deeply impressed by what I saw there. Villagers of all ages shouted “Lal Salaam” (Red Greeting), raising their right hand, when they met others. The village was bustling with activity; groups of combatants of the People’s Liberation Army (PLA) were doing daily exercises in the courtyards and cultural groups were practicing their revolutionary songs in the houses. Guerrillas in combat dresses, carrying machine-guns and rocket-launchers, were openly walking in the lanes. In the front yards, women guerrillas were cooking beef curry which Hindus, making up nearly 80% of Nepal’s population, are prohibited from eating. Here and there, there were a lot of scenes of ‘collective lives’ that I had never seen before.

During my first visit to Thabang, I contracted high fever after drinking river water and had to rest in bed for five days at the house of a local school teacher. Neither the Maoists nor the locals trusted me as they seldom had outsiders in this secure place. I was too sick to get up and just lay down alone for several days without getting any help from the Maoists. 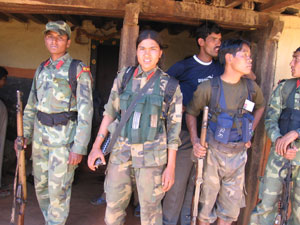 During the six months from October 2005 to March 2006, before the historical April uprising against the monarchy started, I visited Rolpa frequently to see the Maoist leaders and observe their activities. As soon as I received information or messages from Maoists, I rushed west to Rolpa. I had a sense that Nepal’s history was rapidly changing and that I should not miss the chance to witness it. In those days I believed that the source of change was in Rolpa.

After then king Gyanendra took power by deploying the Royal Nepalese Army on February 1, 2005, the political scene in Nepal dramatically changed. The top leaders of the main political parties and the Maoists met in New Delhi in November 2005 and reached an agreement to fight together to end the autocratic rule of the king and to hold elections to the Constituent Assembly. This move was the start of the process that ended the 240-year-old monarchy in Nepal and led to the establishment of a republic. One month after the New Delhi agreement, the Maoists launched a massive campaign in their base area to spread their new political and military strategies to the general public. Central level leaders, in a rare public appearance, addressed the masses, declaring that they would now target the capital Kathmandu where the king lived, by concentrating the PLA in that area.

During this time, I travelled around Rolpa and Rukum along with a large force of the PLA, which provided security to its leaders. After completing their campaign in their base area, they went eastwards towards the capital to participate in a four-month-long tour called ‘Gandak Campaign,’ which became the most intensive military campaign in the Maoist’s 10-year-long insurgency. Two months after that, I was again in Rolpa on a different mission: to meet Nanda Kishor Pun aka ‘Pasang,’ then one of four deputy commanders of the PLA and now the Maoist army chief. Till then no outsider had seen him. Pasang, who was originally from Rolpa, was one of the key military strategists and commanded most of the major military raids in western Nepal. 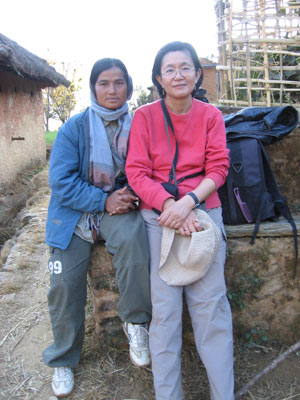 Pasang was a kind of a legend in Rolpa. I heard a lot of stories about him but no one in the media had covered him. I requested a member of the Maoists, who was then in India, to arrange a meeting with Pasang. After the interview was confirmed I left for Rolpa to see Pasang. This happened only a couple of days before the Maoists were going to start an indefinite nationwide general strike so I didn’t know how many days I would be able to stay there.

As usual, I went to Rolpa alone. I prefer to travel there alone so that I can communicate more with the locals and the Maoists. I had to wait for nearly 10 days in Thabang till the arrangements were made. I was then taken to a Maoist post in Khureli, situated in the deepest mountains of northern Rolpa. In a dark and small room I interviewed Pasang for more than five hours. I had so many things to ask him, especially regarding the various major military actions of the Maoists. In the end I questioned him about the Maoist’s latest military strategy and about his prediction of future events. Pasang said, “We have already overthrown most of the feudals. Now, only one big feudal remains in the capital. That is the king. The root of this tree is very weak. A gust of wind could cause this tree to fall down. We are, in fact, preparing for a gust of wind.”

Ten days after I met Pasang, a ‘gust of wind’ blew not only in Kathmandu but also across the country. The nationwide national strike, called by seven political parties with the support of the Maoists, started on April 6, 2006, and continued for 19 days. Millions of people came out in the streets and shouted slogans against the monarchy. While walking around a ring-road with demonstrators, I always remembered Pasang’s words. I believe that even Pasang was not expecting a gust of wind to blow so soon and so strongly.