In a leap of faith, five years ago three art critics, Niilofur Farrukh, Rumana Husain and Amra Ali, and a graphic designer, Sabiha Mohammad, brought out the first issue of NuktaArt, a Pakistani contemporary art magazine. With it they sought to change the perceptions of art as a commodity and push it towards a discussion on issues. Each of them had been writing about art in local magazines and publications for long and felt that they needed to address questions and problems and write for an audience that focused on art issues exclusively. The four brainstormed for two years, and in spite of being made aware of the pitfalls of the business end of it by no less personages than their spouses, their passion and commitment to art carried the day. They each put in seed money, and the largest amount came in the form of an advance in lieu of advertising from one of the spouses, formed a collective wherein they pooled their resources as writers and the first issue of NuktaArt was published in May 2005. Later, Sabiha felt she could not give it enough time so she dropped out.

As the magazine declares: “The name Nukta has been carefully selected for this publication. In Urdu, the national language of Pakistan, it means ‘a point.’ It is the rhombus-shaped basic unit of the Arabic script used to calibrate the proportions of the entire alphabet. It can also be read as nukta-e-nazar or viewpoint. With this ability to expand from the elemental to the universal, the word Nukta resonates with the intellectual traditions of South Asia.” True to its name, NuktaArt carries a vision to create a discursive space for art on Pakistan’s culture scene. It focuses on Pakistani artists and their work and showcases it, not in isolation but in the larger context of debate, discussion, museums, academics and cultural identity. 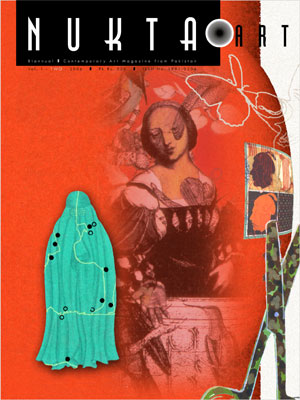 Each issue, except the first, has had an overarching theme, which though not watertight does bind the narrative together. NuktaArt dwells on the themes of censorship; the new media, a field within the discipline of art developed with digital and other technology, that NuktaArt wanted to demystify and try to understand; the role of museums; hybridism in art and the National Gallery of Pakistan. Nukta devoted two issues to the history of Pakistani art in 2007, the year the country turned 60. NuktaArt looked at other postcolonial countries like Indonesia and India, to understand the similarities and diversity of the expression and evolution of their art. In the issue on museums, NuktaArt had writing from Lithunania from a post-Soviet perspective, where there are curators who are grappling with the post-Russian era and where their institutions are suffering from the same malaise as ours. Quite often South America is covered because the editorial board thinks there are so many parallels with say Mexico, chafing against conservative norms and dictatorship as it were. The aim is also to show the reader that Pakistani artists are not isolated and that through discussions and debates solutions can be found.

NuktaArt covers art exhibitions in all major cities of Pakistan: Karachi, Lahore, Quetta and Islamabad, with some outreach to Peshawar. The essays cover information on prevailing issues, museums, the politics of representation and display, and curatorial practices inside the country and outside. In every issue there is one profile, a nukta-e-nazar of someone who has made some extraordinary contribution to the world of art. Interviews with art collectors about their collections are an important aspect of the magazine. Since there are no public collections, most if not all Pakistani art is in the hands of private and individual collectors. The collector, who buys art for the love of it, has been an important figure on the art scene, and is different from an art dealer who speculates. NuktaArt always includes younger artists and are mindful of this. The magazine covered current art news for four years but now there is a website for this. Also, in each issue there is one article on other art forms like literature, theatre etc. Nukta has also been involved with issue-based projects such as the seminar on ‘The Anxious Century,’ and the recent workshop and subsequent seminal exhibition titled, ‘One Mile Square,’ on art and ecology, which is of tremendous concern. 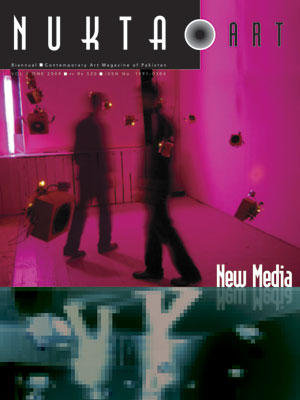 Presently, NuktaArt is a biannual magazine, sold mostly through subscriptions and through galleries. In fact, the galleries are an important part of the support network as the magazine also gives them the required exposure. Production costs are high but they manage to break even. None of the owners take a salary and the time served is strictly for the love of art. While it is an uphill task to sustain the production quality, they have not succumbed to pressures to include more mainstream socially popular topics like fashion and entertainment. Niilofur, Amra and Rumana remain steadfast and committed to substance and intellectual depth in each issue of the magazine. However, getting good writers with a high degree of critical and intellectual engagement with the world of art is an ongoing struggle.

Future plans are to expand into the world market; they already sell at Art Dubai and galleries abroad. The dream is for Nukta to become a larger platform for art research, scholarship, and criticism.

In a multiple reading of the NuktaArt, the dot, the point, in the light of South Asian symbolism, Jasleen Dhamaji wrote in her essay, “The infinite in the finite” (Nukta, October 2006), in reply to the news of the birth of the publication, “… the Nukta can be representative of the still centre, but it is also a drop, which ripples outwards in expanding circles until it reaches the very edge and then spirals back to the primordial still centre, a continuous cycle of expansion and contraction.” Indeed, this is what NuktaArt has sought to do with writing and engagement with art in Pakistan, and accomplished it too.