Call it a boon or a bane, judicial activism is here to stay in Pakistan — at least in the foreseeable future. Our honourable judges, in their attempts to do greater public good, now try to fix prices of sugar and petroleum — which was once considered the sole domain of the executive or the market forces — and initiate suo moto cases at the drop of a hat. More than a dozen suo moto actions have been taken in the last six months, which must be some kind of a national record — if PPP’s legal eagles are to be believed.

Our lordships are also not averse to the idea of making high-sounding moralistic speeches and issuing public statements that clearly carry political overtones — a contrast from the past when judges only spoke through their judgments. As an institution, the judiciary now seems more than willing to lock horns with the executive, even on routine matters. The word “consultation” in the constitution is now being read and interpreted as only the will of the chief justice rather than a consensus-building process when it comes to the appointment of judges in the superior courts. And then, there is a growing perception that the much celebrated independent judiciary of today remains soft on select opposition leaders and hard on the government.

Yes, this high-profile tussle between the judiciary and the elected government is a harsh and an unprecedented reality of today’s Pakistan.

While opinion is divided on the issue of judicial activism in the legal fraternity — depending on which side of the fence one stands on — leaders of the once popular lawyers’ movement say peoples’ expectations from the present judiciary remain high and judges have to live up to them.

Athar Minallah, an eminent lawyer and a leader of the lawyers’ movement, says that poor governance and failure of institutions to serve the people and protect fundamental rights remain the main reasons behind judicial activism. “In a society where the institutions are weak, where rights of the people are not protected and the state is unable to provide quality governance, people will obviously look towards the courts for relief,” he says, adding that even the parliament was not able to handle key political issues and they are now being taken to the courts. 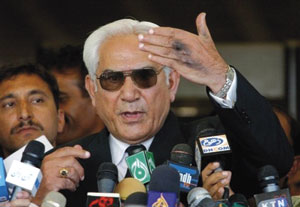 However, Ahmed Raza Kasuri, another senior lawyer and constitutional expert, believes that “judicial restraint” not “activism” is the need of the hour. “All institutions should function within their constitutional and legal ambit,” he believes. “The entire system will be in danger if one institution ingresses into the domain of the other.”

Kasuri maintains that the conduct of the judges is also an issue and ideally, they should speak only through their judgements. “There should be rule of law. Not rule of the judges.”

Ali Ahmed Kurd, another leader of the lawyers’ movement, agrees that institutions should not transgress each other’s domain. “It is simply bad for the system.”

But in these emotionally charged times, when a host of unsettled political and constitutional issues cloud the atmosphere, lines defining powers, functions and responsibilities of state institutions seem not only blurred, but they often overlap — if not constitutionally and legally, at least for all practical purposes.

Latif Khosa, former attorney general and a close aide of President Zardari, maintains that judicial activism is slightly on the excessive side, but he hopes it would gradually settle down.

Says Khosa, “Certainly it is not the domain of courts to try to fix prices. It is the domain of the executive … As attorney general I opposed this when courts tried to fix sugar prices. I said market dynamics are different and the court’s interference would result in sky-rocketing prices and shortage of the commodity — which did happen.”

But the key issue, which is souring relations between the PPP government and the judiciary, does not stem from the cases pertaining to public good. They remain minor irritants. The real problem emerges from the zeal with which the judiciary is pursuing those cases which are more of a political nature and target the president. And the NRO case and charges of corruption and money laundering against President Zardari — including those in foreign courts — top the list.

According to Khosa, there is a perception that the country’s second largest party — PML-N — is shown more grace and leniency in decisions. “Its leaders are being given the benefit of doubt over matters, particularly those relating to their convictions, disqualifications, right to contest elections and other matters,” he says. “On the other hand, the ruling party is at the receiving end.”

“As it happened, when 103 judges were unceremoniously thrown out of their service in the July 30, 2009 verdict on the controversial grounds that they were appointed by the former chief justice Abdul Hameed Dogar and they defied the seven-member bench of November 2007 … the case was regarding the restoration of two Sindh High Court judges … but the court went beyond the then petitioner’s prayer.”

“And, indeed, this is the first time in the history of Pakistan that even sitting judges are facing contempt proceedings. There are judges who took oath under the October 1999 PCO that were retained through 270 AA, which was inserted in the constitution by Pervez Musharraf soon after the military coup. The judiciary of the time, which included Iftikhar Chaudhry, endorsed 270 AA, but 270 AAA — almost a replica of 270 AA — which was also imposed by Musharraf in November 2007, has been nullified. One needs to be consistent in judgments,” remarks Khosa.

The impression that in the new appointments to the superior courts, merit and transparency have been compromised, is also tarnishing the image of the judiciary, independent lawyers say. 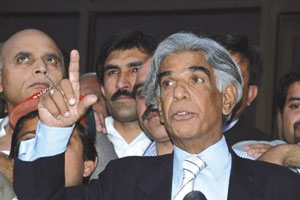 According to Ali Ahmed Kurd, the confrontation between the executive and the judiciary on appointments was resolved by the prime minister before it could take an ugly turn. “We appreciate the manner in which the issue was resolved … On principle, all appointments should be transparent,” he says.

However, for many lawyers the issue at stake is the packing of the higher judiciary with hand-picked nominees — some of whom have clear-cut political and personal loyalties.

Khosa maintains that the new constitutional package aims to address many such issues. “The appointment of judges and their accountability process is included in the package,” he reveals. “I hope that such issues will become a thing of the past.”

But if wishes were horses.