It was morning time in the beautifully picturesque valley of Swat, which had now been reduced to a valley of death. I was there, along with my crew, to do a piece on the military operation. We were rehearsing our cues near the prestigious Excelsior College, Sangota, which had recently been bombed by the militants. Nothing remained except a mound of rubble. I was about to pick up one of the bricks when a bullet whizzed above my head. I was stunned. All my crew members screamed in fright. My gaze followed the direction from where the gunshot was fired.

“Don’t move. Stop there,” a security person shouted from the peak of the mountain. Suddenly, another one approached us and asked us to leave the area.

“You could have killed me,” I protested.

“There is an order to shoot at sight, madam, and you don’t have the permission [to be here].”

Okay, so I needed permission even to report the truth.

Soon after 9/11, when The Defence of Afghanistan and Pakistan Council was converted into a political alliance of six religious parties, the Muttahida Majlis-e-Amal, I knew that the conflict would soon be shifting to my homeland.

I edited the weekend magazine of a local daily at that time, and wanted to turn the spotlight on issues such as the impact of the war on women and children. I realised that it was now time for me to step out of the confines of the newsroom and experience reality first hand. And I did, travelling extensively in the tribal areas and in the Frontier.

Naked children, barefoot women and injured youth braving extreme cold — that was my first encounter with the aftermath of 9/11 at the Pak-Afghan border.

I visited the Khyber Agency bordering Afghanistan and found hundreds of families coming into Pakistan from Afghanistan by crossing the border at Torkham and taking up residence in caves. It reminded me of the Afghan refugee influx in the Kurram Agency in the early ‘80s, when I was just a school-going girl. Now I was a journalist, in search of stories. And it was not going to be easy.

Under the Frontier Crimes Regulation Act (FCR) adopted in 1901, journalism and politics were banned and practicing either was considered illegal in the Federally Administered Tribal Areas (FATA). So how did one report from the tribal belt and, that too, as a ‘female’ reporter?

Let me clarify at the outset that I believe reporters are just reporters, their profession has nothing to do with their gender. But my male bosses generally tend to disagree. In fact, when I first entered the profession I realised that all female reporters were referred to as “lady reporters,” unlike the male reporters who were classified as business reporter, crime reporter, political correspondent, etc. according to their respective beats. So I argued with my editor that if the title of “lady reporter” were used for me, then henceforth all male reporters should be addressed as “male reporter.” The battle of the sexes still rages on. But having said that, I must confess that my gender has helped me cover certain angles of a feature story far better, because I had better access to the families in the conflict zones.

In D.I. Khan, Bannu and Peshawar, for instance, I made contacts with the families of the tribal elders who, at the time, were denying to the world that any foreigner was staying on their soil. But their womenfolk informed me that a lot of families from different nationalities had shifted to Wana, the headquarters of South Waziristan. I travelled to D.I. Khan to get into South Waziristan. But by that time, it had been turned into a no-go area for journalists. I was informed that one of my university colleagues, Allah Noor Wazir, working for a news channel, along with another reporter was gunned down in Wana. The circumstances of their deaths remained shrouded in mystery. Nobody knew who killed them and why? Waziristan was becoming a death-bed for journalists. Dozen of journalists had either been arrested or kidnapped, including Hayatullah, who was later shot dead by some “unknown target killers.”

Soon, an operation was launched in South Waziristan. It was the deadliest operation that I have ever reported on, and given the circumstances, I must confess that what I reported was only half the truth, not the whole truth.

I travelled through Jandola with a Mehsud family known to me — this time as a TV reporter. I visited the caves in Kotkai, the hometown of Qari Hussain, head of the suicide bombers. It had earlier been reported that these caves were once used by Al-Qaeda men. But what I found on the ground was an aged, white-bearded man emerging from one of the caves, books in hand. He told me that for centuries people had been living in these caves because of extreme poverty. That was the reality. And it was obvious that these poor tribesmen had fallen into the hands of the terrorists.

I visited the ruins of the Mehsud tribesmen’s houses and saw for myself the total destruction of the houses and the infrastructure. I roamed around the rubble with my face covered. Camera in hand, I shot all the things from behind my ‘chadar.’ Had I faced the camera, I would have been noticed and stopped. 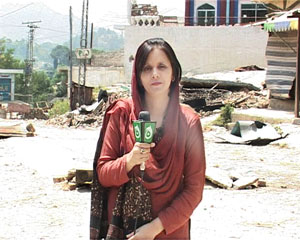 It had been many years since the schools in the area had been razed to the ground by militants, but not a single school had been rebuilt in an area where education and health should have been the top priority. I couldn’t find a single school or a basic health unit. So a child born six years ago had no school to go to. To me this spells disaster for the future of a region. What’s more, there is no parliamentarian to plead their case because the elections for NA-42 have yet to be held.

When I was crossing Malakand on my way to Swat, I saw a few military trucks ahead of me. I sensed a different feeling in the air. There was fear but there was also hope. Fear or hope, what would win the day — no one knew. But I was capturing every moment on camera.

When I arrived home, my mother-in-law narrated the gory details of the horrible things that had been happening in Swat. They were reaping what they had sown. The women had supported all the edicts Maulana Fazlullah, known as Mullah Radio, had issued in the name of Shariah. “But we were told that it’s all about Islam,” one of them said to me. “Is this Islam? Is this what any religion would preach?” I asked them. There was complete silence.

I went to visit the Mingora Boys Hostel that had been bombed, and this time round I had to be on camera unlike the last time when I hid behind a chadar. Everything had been reduced to rubble and the smell of explosives and blood hung in the air. The classes had been dismissed for an indefinite period of time. I felt like a stranger in my own town.

When I returned to Peshawar from Swat I got the news that militants had whipped a young girl in Swat. I shared the news with my colleagues. Everybody in the newsroom said it sounded implausible. Even my producer was not convinced.

I looked at him and said, “You don’t believe that something like this could happen?”

“No, it’s impossible in our society,” he replied.

I didn’t insist. I simply said, “As a woman, yes, I believe that in Pashtoon society women enjoy a lot of respect, but as a reporter I know this incident did take place.”