Nahid Raza has an impressive body of work to her credit. From her Chawkandi series on the ancient graveyard in Sindh to her interpretation of truck art and, in between, paintings of the exploited woman, she has covered an impressive range of colour and imagery that is unique to her. In her Chawkandi series, she celebrated the carvings on the graves in Jangshahi yellow stone and also paid tribute to anonymous craftsmen who made death celebrate life so artistically. The truck art series was Raza’s take on an art form that keeps the truck drivers company in their lonely, long and often tedious journey across the country carting goods. The pictures on the trucks were of the Buraq, peacocks, partridges, naive replicas of a garden, and the self-appointed field marshal, Ayub Khan. Raza complemented the garish industrial paint covering the trucks with the sophistication of her palette. Then there were paintings of women as victims in her usually exuberant colours. She loves the feel of colour and her images emerge out of her chromatic playing fields. Without being a feminist warrior, she showed us the evils of rampant patriarchy in our society. 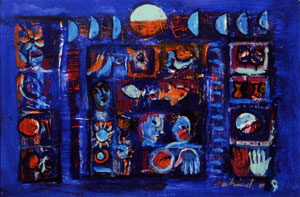 Raza was among the intrepid women artists who appropriated the nude as a protest against painters like Colin David and Jamil Naqsh, who painted the nude for sexual hedonism. Raza painted her sex, from a prostitute to a mother, to tug at our collective conscience.

In her paintings to be exhibited from March 9, 2010, at Chawkandi Art, she picks up on her old theme of the persecution of women in society. She sets off her subjects mostly against a dark backdrop — brown, Persian blue, black — or stark white. Two nudes in red and black and several faces of women are set against a white background which covers the canvas. One of the nudes has a flower stuck to her abdomen, while fish swim round her. Raza’s brushwork is delicate and nervous at the same time. The fish signify fecundity. One is reminded of Shakir Ali, who painted his nudes in black, blue and red. The paintings in black have a series of women in red, green and blue-green lined up at the bottom of the canvas. Two women in profile emerge from darkness in the middle of the canvas while another face at the top glares at us with the eye of an ogre. 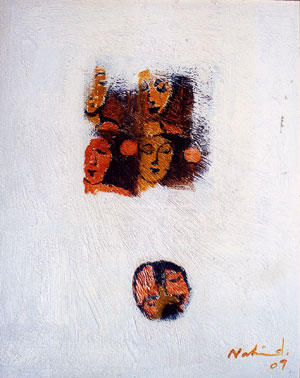 Raza’s division of spaceis interesting. Her nudes are placed strategically at the top or bottom of the canvas, and a small circle, comprising a male and female face or just the human eye, is placed strategically at the centre. Occasionally, she has used the grid as the centre of her universe comprising flora, fauna, fish, the sun, the moon and human faces, all of which find a pride of place in the grid.

Headless torsos dominate some of the canvases. Raza finds them more interesting. It’s not only about the brains, she says. The body too has its uses. And Raza uses the female form — and, in certain instances, faces — to advantage against stark spaces.

In another canvas, Raza has painted a Buraq in ochre, orange, red and black against turbulent brush strokes. The Prophet (PBUH) flew on the Buraq, a creature with the face of a woman wearing a crown and wings of Pegasus, to seventh heaven. Raza has appropriated the mythic horse to drive home to the viewer the sacredness of a woman. Her persecuted women have mutated into the Buraq of the truck drivers in a style from which one can decipher the history of modern art in Pakistan.