No other by-elections in Pakistan’s history attracted the kind of public attention and media hype as the one held on February 24 for the National Assembly seat from the garrison city of Rawalpindi. Flamboyant politician Sheikh Rashid Ahmed’s somewhat personal rivalry with his former leader Nawaz Sharif and his loyalists was perhaps the main factor that made winning these by-elections so critical for both sides.

“It is a contest between the loyal and the disloyal,” Sharif thundered on the last day of electioneering in Rawalpindi, while addressing a rally.

Sharif’s PML-N — the most popular party in the Punjab — threw all its weight to ensure that its little-known candidate Shakeel Awan won this seat with a convincing margin, which he eventually did by securing 63,888 votes against Rashid’s 42,530, according to the unofficial results announced by the Election Commission of Pakistan.

But, compared to his February 2008 general elections’ showing, Sheikh Rashid — who after leaving the PML-Q was leading his small Awami Muslim League — improved his tally of votes by almost 200%, while the PML-N saw a slight erosion in its vote bank.

“They [PML-N] had to win this election at any cost … After losing the by-elections in Mansehra, they could not afford losing these polls,” a sombre Sheikh Rashid told Newsline. “They resorted to the worst kind of manipulation and rigging. The PML-N- led Punjab government blatantly used the administration to secure this victory and stuffed ballot boxes in select polling stations located in the suburbs.”

A group of independent election observers — Free and Fair Elections Network (FAFEN) — too, alleged that “transparency” in these by-elections had been blatantly compromised. Muddassir Rizvi, a spokesperson for FAFEN, says the Punjab provincial government officials, who managed elections as presiding and deputy presiding officers, were partisan. “In at least 30 polling stations, these officials were openly supporting one party [PML-N],” he adds. “The police were deployed even inside polling stations, which should not have been done under the rules. The police prevented journalists and observers from witnessing the election and the counting process. And this was the case in 230 polling stations we visited out of a total of 250.”

The sudden jump in the turnout of voters in the last couple of hours to 35% from 25% also raised many eyebrows. “Polling stations do not have the capacity to entertain that many voters in such a short span of time, given the fact that it takes at least a minute to cast a vote in a highly organised environment if there is a bee-line of voters,” Rizvi says.

Sheikh Waqas Akram, PML-Q’s National Assembly member from Jhang, says that it remains a bitter fact and a bad convention of Pakistani politics that sitting governments abuse administrative powers in by-elections.“ Sheikh Rashid must have done the same when he was in power,” says Akram. “It comes with the package. In by-elections, the ruling party candidate usually wins.”

At one point, all television news channels were reporting that the PML-N candidate would get more than 72,000 votes and Sheikh Rashid around 48,000. But that figure was later slashed to 63,888 and 42,530 votes respectively for the two main contestants. The officials have yet to come up with an explanation for this discrepancy. 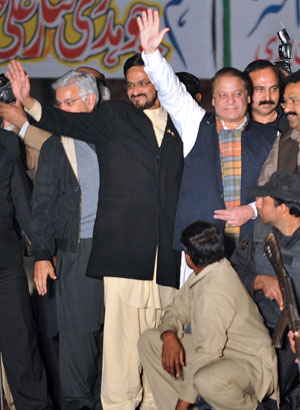 At all costs: Nawaz Sharif threw the weight of an entire party behind his candidate. Photo: AFP

Political observers say that manipulation and rigging might have helped the PML-N candidate to extend his margin of victory, but that Sheikh Rashid was never in a winning position. But Sheikh Rashid’s high-profile election campaign — in which he also faced an assassination attempt and saw three of his aides killed in front of his eyes — forced PML-N leaders, including Sharif, to leave nothing to chance. The top-brass of the PML-N had to focus on this constituency to ensure the defeat of a dissident whom they all love to hate.

“If there had been any rigging, why has Sheikh Rashid not taken it up with the Election Commission?” asks Hanif Abbasi, who was in charge of PML-N’s election campaign in the by-elections.

In a post-election ceremony to mark what PML-N says was the win of a worker, Punjab Chief Minister Shahbaz Sharif called Sheikh Rashid a candidate of President Asif Ali Zardari. “He was Zardari’s candidate … and was rejected by the voters.” Officially the ruling PPP stayed neutral in these by-elections, but at the local level many PPP supporters and activists openly worked for Sheikh Rashid. The PML-Q, which openly announced its support for Rashid, saw many of its local leaders and workers switch to the PML-N camp allegedly due to bribes and the use of administrative force.

The 2007 Lal Mosque operations, in which dozens of militants were killed by security forces, was one of the main charges brought by the PML-N candidate against Sheikh Rashid, who was in former president Pervez Musharraf’s camp at that time. This is why many hardliner religious individuals and groups were seen campaigning for the PML-N candidate in a constituency that its party officials say had always been their stronghold.

After his complete rout in the 2008 general elections, this is Shiekh Rashid’s second consecutive defeat — a blow indeed to the flagging political career of a man who takes pride in calling himself the Farzand-e-Rawalpindi. But given his tenacious nature and traditional close contacts with the military establishment, it is too early to say that he has run into a dead-end. His natural glibness, wit and political shrewdness is likely to keep him in the political ring and in demand as a much sought-after guest at the swelling number of television talk shows.

However, these by-elections have really been demoralising for the Jamaat-e-Islami and Imran Khan’s Tehreek-e-Insaaf. Both these parties ran cash-flushed campaigns for their candidates, but witnessed a complete rout.

Jamaat-e-Islami’s Dr Mohammed Kamal secured just 3,109 votes and Imran Khan’s candidate Ejaz Khan Jazi 3,105 — both trailed behind an independent candidate Barrister Danish Iftikhar, who got more than 5,000 votes in a by-election in which a total of 22 candidates were in the running.

The rejectionist and confrontationist politics of these two parties, which bank heavily on pro-Taliban and anti-US sentiment, as expected, failed to catch the imagination of voters — underlining the fact that their size and presence in the media is far bigger than their electoral worth.

For Imran Khan, this election blow is even harder because his candidate secured more than 12,000 votes when he ran in the last elections as an independent. His association with the mighty Khan ate away even his individual support base.