For a nation that is still grappling with issues of identity and cultural ownership, Saima Zaidi’s Mazaar, Bazaar: Design and Visual Culture in Pakistan is testimony to our pluralistic heritage. The book reveals a rich, all-embracing view of the myriad of influences and diverse origins that have helped shape the cultural landscape of Pakistan. Pluralism was our inheritance until someone decided that the nation’s rightful destiny lay in identifying ourselves solely with the Muslim ummah and the Arab world. This beautifully illustrated and well researched volume helps negate this myopic view and takes the reader on a fascinating journey through the country’s main roads and back alleys, inner compounds and market places, magnificent mausoleums and modest shrines, serving up a complex and multi-hued visual feast.

The aim of the book is to examine the relationship between images and the viewer, how the visuals reflect beliefs, aspirations and tradition and also how they, in turn, shape a people’s psyche. Comprising 33 essays written by a cross-section of Pakistani academicians and professionals, the book not only documents the visual history of Pakistan but also brings together a collection of voices that are widely held to have yielded influence during the current era.

The book is divided into five sections that encompass images ranging from contemporary themes to the Gandhara Art and Indus Valley seals. The first section is titled “Dekh Magar Pyar Se,” a piece of advice or request flaunted by public transport vehicles. As the title suggests, this section focuses on the ubiquitous truck and minibus art in Pakistan as well as other forms of populist artistry like cinema hoardings and pehlwan posters. All these genres share a flamboyant, larger than life sensibility that shouts out their meaning in no uncertain terms. Durre S. Ahmed examines the specific iconography of the Buraq, Jhuley Lal and Zuljinnah most often employed by transporters as all these icons in some way represent the journey, even if in a metaphysical sense. The mythical Buraq carried the Prophet (PBUH)to the heavens, Jhuley Lal is revered by both the Hindus and Muslims as the patron saint of travellers while Zuljinnah, the steed of Imam Hussain, embodies the ideals of valour and nobility that spur the self onwards in a spiritual journey. 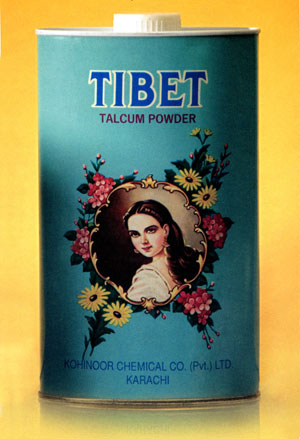 In his essay on portraits of Muslim saints, Jurgen Wasim Frembgen turns the discussion to the aura of holiness and barakat invoked by the images of these persons, who are considered to be closer to God, which can elevate the humblest of dwellings. The curious and lesser known practice of portraits of living saints painted by their disciples is also brought to light. Michel Boivin writes about the imagery of the horseman as a a saviour popularised in folklore throughout Sindh. Although the imagery sometimes overlaps into Muslim traditions, this heroic warrior-saviour is most often seen in Hindu temples and each has its own legend and own community of devotees. The inclusion of this Hindu tradition is again a welcome ownership of the different communities that still inhabit this land of the pure, communities that we are mostly inclined to ignore. In fact, it would have been appropriate to include some images from the Zorastrian culture that has enriched and enlivened urban life in Karachi and Lahore at least.

Naazish Ataullah traces the miniature tradition, its absorption into popular culture as well as its evolution as a higher art form relevant to modern times. Atteqa Ali’s essay on staged backdrops for portraits in photography brings back the spotlight to a forgotten tradition while Hasan Zaidi’s piece on film hoardings traces not only the technological shift in trends but also the change in focus and mood created by these towering images. 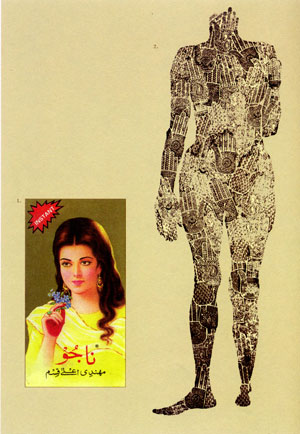 The second section of the book, titled Read, invoking the QuranÃic “Iqra,” focuses on the written word as it pervades our living spaces, from the Jangnewspaper to wall chalkings and calligraphic inscriptions.

Section three, “Be Pakistani, Buy Pakistani,” deals with images associated with popular products that have become an inescapable part of the public imagination. Our familiarisation with Pakola bottles or Rooh Afza, for instance, and their association with Pakistan is so complete that both brilliantly coloured beverages can claim iconic status. In ‘Henna Hands,’ Naiza Khan associates the portrait of the damsel on a packet of Najo Mehndi with the ideals of womanhood and female sexuality celebrated in the subcontinent. Meanwhile, ‘Tibet Talcum Powder’ by Durriya Kazi unearths a series of portraits by artist Mirza Manzoor whose imagination conjured up the epitome of eastern beauty. The writer points to the shift in popular sentiment as revealed by Manzoor’s demure Tibet Snow damsel and the bold models who beckon from advertisements today.

In the essay ‘Brand Take-off,’ tracing the history of PIA’s advertising campaigns, the collection of advertisements depicted in the book tell their own story of how the national mood has changed since the airline’s inception. The trendy, fun-loving adverts of yesterday slowly give way to more staid, patriotic themes. In the final essay in this section, Arif Hasan comments on billboards and their impact on urban environment. He also discusses how globalisation and a growing consumer culture have fed the rise of these mammoth structures. 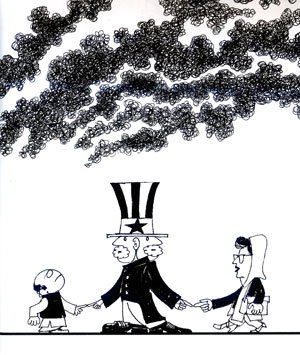 The next section is titled “Pakistan Zindabad” and touches upon state as well as political imagery. Ayesha Jalal takes a closer look at the national flag, the symbols employed and wonders whether Pakistanis ever stop to recall or consider the ideals ensconced there. The symbolism of colour, green for Islam and white for non-Muslims, clearly pointed to the ideal of both Muslims and all others sharing common citizenship as equals. Akbar Zaidi offers an interesting look at an attempt to make the Quaid-e-Azam more accessible to a younger population by employing youthful images of him, while Quddus Mirza debates the functional versus the aesthetic as evidenced by changing currency notes. A look at postage stamps over the years, by Rubina Saigol, offer a telling glimpse into the shifting priorities of different heads of states and political satire is represented by a selection of caricatures by Feica. Saima Zaidi picks up the pen herself to write about the symbols and images employed by political parties during electioneering campaigns. She examines the cult of personalities that dominates the political arena and the psychological choice of objects and colour that are chosen for maximum impact.

The final section of this volume, on pre-partition perspectives, travels back in time. The first article uncovers a series of lithographs employed as posters for publicity and propaganda purposes. One of the prints advertising an upcoming play to be presented by the Mayo School of Arts is attributed to Abdur Rehman Chughtai. In fact, one feels the absence of a more complete selection of Chughtai’s oeuvre, which distills aesthetics and symbolism as derived from an eastern, traditional context and which helped shape the images idealised in the subcontinent. The reader then travels a few hundred years back to enter a discourse on the miniature painting in Nizami’s Khamsa. This collection of poems by the Irani poet was written in the Kutub Khana founded by emperor Humayun and it was under the benevolent Moghul patronage of the arts that high literature met the high art of miniature painting to culminate in this masterpiece. Akbar Naqvi’s essay discusses the philosophy behind miniature painting, the art of illumination which sought to illuminate the page with the fire of the soul and thought. The article elevates the discourse to a spiritual plane where faith and love and art become inextricably intertwined.

Another article on the portraits of Guru Nanak follows. As Francisco Luis points out, though they may be painted in different styles, the influence of Sufi-Shia Islam on Guru Nanak’s philosophy is evident for those who choose to see it. However, one problem here is that Sunni and Shia Islam share a common heritage and lineage and the distinction is not so clear, especially for lovers of the ahle-baith. The last three articles deal with coinage in the subcontinent and Gandhara and Indus Valley art.

This book has clearly been a labour of love for Ms Zaidi, who researched, coordinated and studied extensively for six years before seeing it in print. Besides the magnificent trove of illustrations it contains, each is accompanied by detailed histories and edifying pieces of information that make for compelling reading in themselves. Although printed by the OUP, the project would not have been possible without generous funding from the Prince Claus Fund Library, as evidenced by the sheer volume of this project. One hopes that the Prince Claus Fund will also support other important projects by Pakistani scholars in the future.