Earlier this year, a PIA official in Karachi, Irshad Ali Rind was asked to delay a flight bound for Sukkur for the inspector-general of police, Sindh. Not having the authority to do so, Rind declined the request and as a result, the flight took off without the inspector. Soon afterwards, Rind’s house was raided and he was arrested and taken to a police station where he was tortured. Rind was only released upon the request of the Sindh home minister who had been approached by the PIA labour union. Subsequently, the SHO at the police station was suspended for abusing his authority, but no action was taken against the DSP or the inspector- general.

In March, a 14-year-old girl was raped at gunpoint by the deputy-superintendent of the police, Nawaz Wahla, and another man who had broken into her grandparent’s house in Sheikhupura district, where she was residing, tied up the old couple and took the young girl to another room. Afterwards, the men fled the scene. The young girl had to be rushed to the hospital by her grandparents, who later filed a case against the police. While the other culprit with the inspector that night has been arrested, the officer himself still remains at large.

In April of this year, 18-year-old Malik Waqar was admitted to a hospital in Rawalpindi in critical condition after he was found dumped on the road. According to his parents, the police had picked him up on false charges of theft, and when they tried to find him, they learnt that no FIR had been filed against him and that he had been taken to a private location where he was tortured for a week and then left on the road. Subsequently, their son succumbed to his injuries. While the superintendent has stated that efforts were being made to arrest those responsible, no one has been charged for the crime so far.

Also in April, the police baton-charged and tear-gassed members of the Pakistan Paramedical Staff Association during a nonviolent protest outside the Sindh Services Hospital, where they had gathered to demand better pay and health allowances. As some protestors ran into the hospital seeking refuge, they were chased by the police, and in the melÃ©e that ensued several patients and protestors were injured, and others detained.

These are just a few vignettes of what is business as usual for local law-enforcers. The idyllic perception one might have of officers of the law-enforcement agencies would be, that of men and women who uphold the law, fight crime and maintain peace — while risking their lives in order to do so. So why is it then that the average Pakistani citizen seems wary of approaching the police for help?

According to a Transparency International survey, in 2011 the Pakistani police was perceived as the second most corrupt department of the public sector. One wonders where it would rate on the efficiency level. Perhaps a closer inspection of the Pakistani police force could answer some of these questions.

In an interview with the The Express Tribune, the director-general of the Anti-Corruption Department, Sindh disclosed that nearly 400 challans were filed against the officers in the anti-corruption court between January and September of last year. That same year, according to a special police report prepared by the investigation wing of the Punjab police, over 80 other cases of corruption were filed against police officers. However, only one of those officers charged with corruption was actually imprisoned. Half of those still remain under investigation. 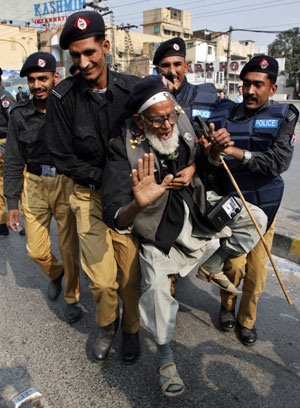 A flawed salary structure may, of course, be one of the factors contributing towards this staggeringly high number of corruption complaints against the police. The salary of a police constable, who works 12-hour shifts, is Rs 18,000 a month with a yearly increment of Rs 260. This includes all benefits and allowances. If he resorts to taking bribes to make ends meet, it is perhaps understandable — but never quite justifiable. And corruption in the forces works its way down. The higher the rank, the bigger the taking. If a traffic constable pockets Rs 500 from an errant driver rather than hand him a ticket, the price for more serious violations just keeps escalating. The bigger the crime, the higher the pay-off, and the higher-up the cop, the steeper the commensuration.

That’s the monetary corruption. Then there are the innumerable cases of ethical abuse. The HRCP reported that in 2009 the IG of the Punjab Police admitted that 253 gangsters were killed by police personnel during ‘encounters.’ Police officials contend, off the record, that a flawed judicial system and an abysmally low conviction rate — in anti-terrorism cases, for example, the conviction rate reported has been as low as 10% in the last 13 years — often makes the police feel the need to take the law into their own hands, especially when they are convinced of the guilt of the perpetrators.

The police have often also justified the use of torture as a means of obtaining confessions claiming the lack of other alternatives — i.e. more sophisticated means of investigation. According to the Society for Human Rights and Prisoners’ Aid (SHARP), 4069 prisoners in Pakistan were tortured at the hands of the police in 2009. Torture methods included beatings with batons, prolonged isolation, denial of food and even hanging the prisoners upside down in jail cells and forcing their legs apart with bar fetters. Torture has, in some cases, even resulted in the death of prisoners.

A retired police officer disclosed that often during investigations the approach has been “to slap first and ask questions later.” And it is no secret that the police often use excessive force when dealing with protestors, even though the law very clearly stipulates that force should not be used unless the public demonstration poses a threat to public peace. Nonetheless, the police continually use batons and guns to combat even peaceful processions. The officer reveals that this remains by choice, since the Sindh police has been provided with tasers and far less harmful alternatives to subdue protestors.

Then there are the sins of omission as grave as those of commission. According to a report by the Lahore Court in 2009, there have been 139,527 complaints against the police for not registering FIRs filed by citizens. In March this year, the police received a lot of flak after publicly harassing Shahjehan Begum for seeking out Punjab’s chief minister and urging him to punish the cold-blooded murderer of her two daughters — a murderer who had not been arrested nearly a year after the incident, despite eye-witnesses to the crime and its perpetrator. As the media got wind of the case, it received substantial coverage in the news, following which the chief minister, in a gesture that was widely seen as a purely public relations attempt at damage control, issued orders to have the murder suspect arrested.

In what could be seen as a continuing spirit of PR, the Inspector-General of the Punjab Police, Habibur Rehman swore not to take any bribes at a police darbar on March 11, and said that a special cell had been set up to eradicate corruption in the force. He acknowledged the poor performance of the Rawalpindi police, but pledged to continue fighting crime and providing justice to the victims. No news on how effective this corruption cell is, has been reported since then.

Recently, IG Rehman, was invited as a guest on the talk show Awam Ki Adalat, where, in addition to blaming insufficient resources and the low number of police officers, he insisted that the black uniforms of the police were to blame for the rage displayed by the officers. His explanation — which is baffling at best — was that since black absorbs more heat, it causes the officers to lash out more.

A former IG of Sindh police, who requested anonymity, revealed that the biggest hurdle the police force faces is the fact “there is no political will to change.” He also revealed that the police have always justified their inefficiency by cleverly blaming the low number of armed personnel assigned to do the job. However, he explains that the problem is more deeply rooted than that. According to him, the biggest setback that the police force faces is the ever-increasing political interference in matters of policing. He disclosed that political interference has, in fact, now reached an unprecedented level, and that most officers are no longer hired on merit; many are virtually uneducated and untrained, with political connections playing a huge role in the selection of inspectors. Hence, he maintained, the quality of policing has literally plummeted to new depths. According to a United States Institute of Peace (USIP) special report, Pakistan’s policing laws were inherited from a colonial Policing Act of 1861 that was meant to suppress people rather than serve them. While improvements were attempted through the Policing Act of 2002, several of those improvements have since been reversed through amendments to serve the purpose and varying agendas of assorted legislators.

A case in point: The 2002 Act included a provision known as ‘Police Accountability,’ which entailed that if a civilian suffers an injury or is raped while in the custody of the police, then a formal investigation has to be carried out and the perpetrators of the offences are subject to punishment. Through the 2004 amendment, this provision was removed, along with others via more amendments incorporated into the law that year. Against this backdrop, what hope is there for improvement?