In his book The American Role in Pakistan 1947-1958, M.S. Venkataramani reveals that on May 1, 1947 Quaid-e-Azam Mohammad Ali Jinnah “received two American visitors at his Bombay residence. They were Raymond A. Hare, head of the Division of South Asian Affairs at the Department of State, and Thomas E. Weil, the second secretary of the US Embassy in India. He (Jinnah) sought to impress upon his visitors that the emergence of an independent, sovereign Pakistan would be in consonance with American interests. Pakistan would be a Muslim country. Muslim countries would stand together against Russian aggression.”

The leaders of the newly-created Pakistan lived in constant fear of Indian aggression and to strengthen the country’s rag-tag army, they needed American support. So as a trade-off they offered their services to the US to counter the socialist threat to the region. Jinnah’s vision was actively pursued by his prime minister, Liaquat Ali Khan and finance minister, Ghulam Mohammed. They requested the Americans for assistance and assured them of their support against Russia. In return, the Americans offered the first secret tranche of arms as a gesture of support when Liaquat Ali Khan visited the US in May 1950. Incidentally, the secret was exposed when the shipment exploded in an accident at a small New Jersey port. Alongside, the Americans also issued a warning that the arms would not be used for aggression against any other country, implicitly meaning India.

But Pakistan, driven by the perceived Indian threat and pandering to its military leadership, kept on sinking deeper and deeper into relations with the US. First they signed a Mutual Defence Pact, which featured a clause clearly outlining that any communist insurgency must be combatted. Further, to please the Americans, the Communist Party of Pakistan and other left-leaning organisations like the Democratic Students Federation and the Progressive Writers Associations were banned.

In 1955, Pakistan joined the Baghdad Pact (now known as CENTO), an alliance of countries whose primary goal was to contain the Soviet Union. That same year Pakistan also entered the Truman-inspired anti-communist alliance, SEATO. When Khawaja Nazimuddin, then prime minister, resisted the move, he was booted out by Ghulam Mohammed, just as Mosadegh’s government was toppled in Iran in a coup engineered by the CIA.

US military assistance kept on pouring in. Dozens of senior army officials were trained by the Americans but the practice was stopped in 1965 because Pakistan had launched the covert ‘Operation Gibraltar’ across the LoC. The Indians retaliated by converting this into a full-fledged war, declaring that if they had to fight ‘they would choose their own battlegrounds.’ Subsequently the US stopped military equipment supplies to both countries. For the first time in Pakistan, the government propaganda machine began to disseminate a negative image of the Americans. The state-controlled media said that India had started the war without any instigation and that the ‘US had not proved to be a reliable friend.’ Military and civilian assistance was revived in 1975, only to be discontinued once again under the Symington Amendment in 1979, due to a concern over Pakistan’s nuclear programme. 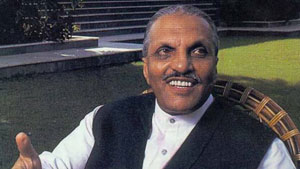 General Zia-ul-Haq: The most allied ally.

However, the US soon forgot all its concerns vis-a-vis nuclear proliferation as soon as the Soviet forces entered Afghanistan at the invitation of the Afghan government to curb what they called a Pakistan-sponsored insurgency in the shape of the mujahideen rebels. The US assistance to Pakistan was restored and Pakistan was offered over three million dollars in aid. But General Zia-ul-Haq, the architect of the insurgency, turned down this US assistance calling it “peanuts.” But thanks to US Congressman Charlie Wilson’s covert campaign, the US was convinced that their defeat in Vietnam could be avenged in Afghanistan by supporting the Islamic jihad against the left-leaning Afghan government and, its supporter, the Soviet Union, in a big way.

From 1979 to 1989, General Zia-ul- Haq and the US administration created a number of Islamic jihadi groups consisting of Afghans and Pakistanis. Now, several decades later, Pakistan is reaping the bloody harvest of this dangerous policy. As most mujahideen were selling almost 50% to 70% of US arms and ammunition in Pakistan, the country saw a proliferation of weapons worth at least USD 1.5 to two billion. Once the Soviet forces withdrew in 1989, the Americans also departed, leaving us to deal with these ‘Islamic techno-guerillas,’ who have now turned their guns on Pakistan.

Moreover, the US was reminded, once again, of Pakistan’s nuclear programme and, under the Pressler Amendment, all military and economic assistance was halted. In his testimony before the US Foreign Relations Committee in 1992, Senator John Glen maintained that the US had given Pakistan assistance of USD four billion between 1982 and 1990, on the assurance that Pakistan would not pursue its nuclear programme, but there was evidence to the contrary. Thus the flow of military and financial assistance from the US to Pakistan dried up between 1991 and 2001. After Pakistan’s successful nuclear tests in 1998 and General Pervez Musharraf’s military coup against the elected Nawaz Sharif government in 1999, the sanctions on Pakistan became harsher.

But then came 9/11, when the Twin Towers were targeted by Al Qaeda, and the US gave Pakistan no option but to join the war against terrorism. President George Bush made it quite clear to our obsequious general that “either you are with us or against us.” Pakistan decided to join the war against terror, but it was not willing to go against the Taliban government, which was installed in Kabul after significant investment by Pakistan’s intelligence agencies. Hence, it decided to play the deception game by giving the Taliban a safe haven and support, alongside supporting the US against the Al Qaeda threat. 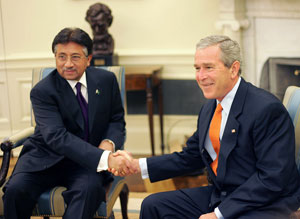 Musharraf with Bush: Bending over backwards.

These militant Islamic forces, who fulfilled Pakistan’s commitment to work against the Soviet Union and socialist forces in General Zia’s time, have now become a major bone of contention. The Americans are demanding that Pakistan combat these militant Islamic forces. While the US and a majority of Pakistanis view these jihadi forces as a liability, for Pakistan’s establishment the Afghan Taliban and outfits like Lashkar-e-Taiba are assets.

The US has pumped almost USD 23.6 billion into Pakistan between 2002 to 2012. Of this, USD 15.82 billion was assigned for military assistance and USD 7.77 billion as economic aid. Pakistan’s finance ministry sources say that USD 8.8 billion was not assistance as it came under the Coalition Support Fund (CSF) and, therefore, should be deducted from the grand total of USD 23.6 billion. This leaves the real assistance to USD 14.8 billion and, according to a US Congress report, not all the money has been disbursed.

In 2009, under the Kerry-Lugar Bill, the US announced USD 1.5 billion each, for military and economic assistance, per annum for five years. The Pakistan army was opposed to one particular clause in the bill which stated that the US secretary of state would have to testify that Pakistan’s civilian government maintains supremacy over the military establishment. As things stand today, if the Judicial Commission on the alleged‘Memo’ case were to declare that Husain Haqqani had, indeed, written that incriminating piece of evidence at the behest of President Zardari, it would implicitly prove that the elected government does not have control over its military. This could result in a drastic slash of US military assistance to Pakistan.

If the US Congress figures are accepted as being accurate, Pakistan has received more than USD 30 billion from the US since 1948, out of which more than USD 23 billion was allocated just in the last 10 years, when the US waged the war in Afghanistan.

This article was originally published in the June issue under the headline “Aid and Abet” as part of the cover story on US-Pak relations.