We now know that it is a fallacy that “the hand that rocks the cradle rules the world,” for if this was a truism we would have studied “her story” as well as his, but if a woman wields a pen in her other hand then, through the power of her words, she can become a catalyst for change. Zubeida Mustafa, former Assistant Editor, Dawn and currently a widely-read columnist, nominated by the International Women’s Media Foundation for their Lifetime Achievement Award, is such a woman. The nomination describes Zubeida as a pioneer who paved the way for women in the media. Acknowledging that she did carve an opening by being incorporated at the policy-making level at Dawn, she emphasises that “if younger women hadn’t responded and seized the opportunity, the door that was opened would have shut. Without their presence where would my pioneering have gone!”

I first met Zubeida when she joined the Dawn newspaper in July 1975, where I was working on a part-time basis as editor of the women’s page and later of two more feature pages. Until I resigned in 1981, we shared ideas and opinions and brainstormed on issues concerning women and other marginalised sections of society. Zubeida was the first to come in for work as she timed her work hours to tally with her children’s school hours. As her children grew up, her commitment and organisational skills allowed her to give more time to her career. By the time she retired in 2008, Zubeida introduced and edited a number of feature pages, including the widely read Books and Authors magazine, for which she received an award from the Pakistan Publishers and Bookseller’s Association in 2005.

Our adjoining offices were in what I recently learnt is referred to, in good humour, as “the Islamabad corridor,” but Zubeida and I never saw it as a power base in the bureaucratic sense. In retrospect, I think we were empowered in a positive manner, largely due to the late Ahmad Ali Khan, then Editor of Dawn, who provided us with a comfortable, secure environment, as well as his guidance. Zubeida describes him as her mentor who taught her how to “bottle a river in a tumbler (darya ko koozay mein band karna) and how to look at a problem from the people’s point of view and to never be unfair in one’s writing.”

During one of our conversations I learnt that Zubeida had applied for a Commonwealth Scholarship to the London School of Economics to study for an M Phil leading to a PhD after having worked for several years at the Pakistan Institute of International Affairs. She had joined the PIIA as a research officer after completing her Masters in International Relations from the University of Karachi. By the time the letter came in informing her that she had received the scholarship she was married and the mother of a baby girl, Seemi. Since her husband was leaving for London, she made the difficult decision to go with him but gave up her scholarship after six months because she missed her baby and also because that was in 1970 when Pakistan was going through troubled times. Seemi was in Chittagong with her grandmother. 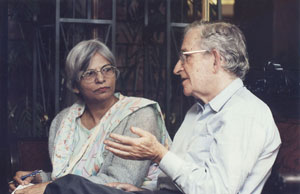 The ’60s and ’70s were exciting and challenging years for young Pakistani women who had been sent by their protective parents to local and foreign universities for their post-graduate studies and then allowed, with some hesitation and ambivalence, to enter professions once considered exclusive male domains. Some responded to the vibrant international movement for gender equality through their writings, professional achievements or social and political activism. Many did so by redefining their spousal relationships and empowering their daughters. “The injustices women have suffered in our society has touched me deeply,” says Zubeida. “It was you, Rukhsana, who provided me the theoretical underpinning to feminism — remember all the discussions we would have. At times there are issues one is affected by or feels for, but they are beyond one’s understanding. However, once I felt I knew what the struggle was all about I was no longer confused.”

Zubeida categorises the women’s movement as having passed through three phases: the first period resounded with “the moaning and groaning about the excesses being committed against women.” The second stage saw women trying to scramble to their feet and gain self-esteem and empowerment. In the third phase women succeeded in raising their status. She qualifies her statement by adding that “our society is so stratified that the fate of one section of the population, especially women, is not necessarily the fate of all. Women who have made it can provide opportunities to underprivileged women, but the latter need to make use of them.” 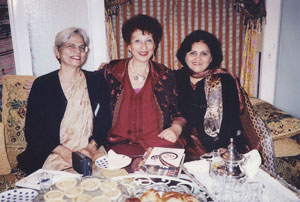 As we move on to the pivotal subject of education, Zubeida tells me she believes that it is Pakistan’s failure to educate its citizens which is the root cause of all our problems. “Had the country got down to educating the people more than half our problems would not have existed and the other half would have been on the way to being solved,” she continues. “Education is important for people to have awareness of health issues.”

In 1986 and again in 2004, Zubeida was presented the Global Media Award for Excellence by the Population Institute in Washington for her focused and researched articles on population control. “By not controlling our galloping birth rate, Pakistan has multiplied its problems enormously,” she remarks. “One must view the issues of education, women’s empowerment, health and population planning holistically as they have to be addressed together.”

Rightly identifying class disparities as our biggest tragedy, Zubeida points out that “there is no social justice, since a small minority has all the privileges and opportunities, while the underprivileged majority lacks all the basic human rights essential for a decent life.” The inability to share and the lack of a collective approach is responsible for many of our social and political failures. Zubeida notes that we have “a bunch of power-hungry leaders who are not statesmen by any yardstick. They are selfish, corrupt and ignorant. They have no strategy to resolve the current crisis nor do they want to.” 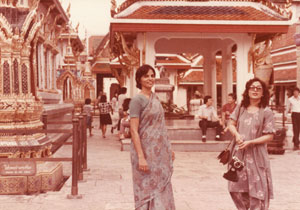 October 1983: With Razia Bhatti (right), then editor of the Herald, in Bangkok on their way back from a conference in Bali.

An intellectual, compassionate woman, Zubeida combines idealism with pragmatism. Her advice to the privileged is to “start taking an interest in the concerns of the common people in order to change things. If we are generous and share with others, we will not be losing anything. Remember, a candle that is used to light other candles doesn’t lose the brightness of its flame.”

Mentioning her role models, Zubeida says it was her mother who gave her the inner strength to cope with life and accept change, while her father taught her the importance of integrity and the value of hard work. And from Dr Akhtar Hameed Khan, she learnt the importance of self-reliance and the dignity of labour. But the canvas of Zubeida’s own life is so richly coloured with positive, courageous and empowered motifs, that she could serve as the ideal role model for the young and old alike, especially in these times of crass commercialism, corruption and divisiveness.

Zubeida is facing a major challenge at present, which is her failing eyesight. In a quiet, even tone she says that the IWMF Award has come at the right time as she does sometimes find herself wondering how she will cope in the future. She remembers her close friend Khalida Qureshi, who died of cancer 29 years ago, and who taught her how important it is to keep smiling in times of adversity. Instead of wasting precious time wrapped in self-pity Zubeida soldiers on, disseminating vital information, pressing for improvement in the lives of the oppressed, the marginalised and the average citizen on the street. Sadly, Zubeida’s world might literally be turning darker, but nothing can dim her vision or cloud the clarity of her words.

This profile was originally published in the June issue under the headline “A Life Less Ordinary.”