“Today is a historic day for Pakistan,” said Simon Koh, the Special Olympics Operations Director for the Asia Pacific Region, when I met him at a training camp for eye specialists at the Layton Rahmatulla Benevolent Trust Free Eye Hospital (LRBT) on May 8.

All around us, children in school uniforms made their way round the various stations, undergoing tests on everything from visual acuity to colour blindness. However, because these children have special needs, the doctors and volunteers had to patiently guide them around the room, repeating instructions several times and in some cases even gently moving the children’s heads so that they faced the eye charts. One boy sat down on the doctor’s chair by mistake but instead of asking him to move, the doctor moved to the patient’s seat and simply swivelled the sit lamp around. Another young boy broke down in tears upon finding himself in a foreign environment and could only be placated with candy. These are children after all.

Not surprisingly then, most of the children seemed amused by the eye tests and were quite excited when it came time to choose free sunglasses for themselves after completing their screenings. And although the primary purpose of this camp was to familiarise doctors with working with people with special needs, many of the children were, in fact, found to have eyesight problems for which LRBT provided them with prescription glasses.

The event may have gone unnoticed for most in the country, but it certainly was a milestone for Special Olympics Pakistan (SOP). This is not just because it was the second day of the camp for doctors to learn how to work with patients with intellectual disabilities, but also because the day marked LRBT’s formal commitment to providing free eye care to special athletes all over Pakistan.

It is a common assumption that people with intellectual disabilities get at least the same medical attention as other people, or perhaps even extra care because of their special needs. In reality, many special persons do not get treated for even basic conditions and in some parts of the world they do not receive healthcare at all. As a result they often suffer from problems such as obesity, tooth decay and, in many cases, vision impairment. The Special Olympics’ Healthy Athletes programme has the largest health database of people with special needs in the world and they have found that out of the 200,000 special athletes provided with free eye screenings internationally, around 90,000 needed prescription glasses. Other statistics reveal that 18% of special athletes wear clinically incorrect eyeglasses and that more than two-thirds have not had an eye examination in the past three years.

The figures for Pakistan could be much worse since, of the 16,000 special athletes registered with SOP, the majority comes from lower-middle class families who often do not have access to proper healthcare services. And considering that more than 170 million people live in the country, the population of people with intellectual disabilities is estimated to be significantly higher than 16,000. Koh believes there could be up to five million people with intellectual disabilities in the country and in many cases, their families keep them at home, thereby further marginalising them in society. 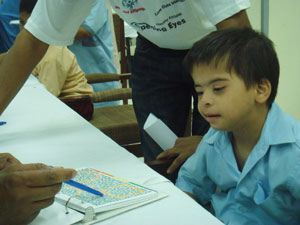 Free eye screenings are already being provided to special athletes all over the world, and the Special Olympics’s Healthy Athletes programme, founded in 1991, made its way to the Asia Pacific region in 2004. The programme has proved to be highly successful and Koh gave me an example of a Japanese special athlete whose father complained that no matter how hard she trained, she always came in second at the National Games. The athlete tried various sports from speed skating to swimming and her father even hired special coaches, but they saw no improvement. Eventually it was discovered that she had a severe vision problem and could only see up to eight feet ahead, which was why she always placed herself behind other athletes in the games so that she could follow their path. Once her impairment was diagnosed and treated, she immediately began bringing home gold medals.

Pakistan’s special athletes have always done well at the Special Olympics, in spite of the lack of resources in the country. Last year at the Athens games, the 82-member contingent from Pakistan competed with 7500 athletes from around the world and brought home 56 medals. It would be reasonable to imagine then, that once these athletes receive free eye examinations and treatment, the number of athletes able to compete internationally and potentially win medals for the country will only go up.

And the woman who helped bring the Special Olympics Opening Eyes programme to Pakistan is Ronak Lakhani, Secretary General of SOP. Lakhani was recently elected as the Asia Pacific Region representative at the International Special Olympics board — a milestone in itself for SOP. At the training camp, she kept a close eye on all the stations, immediately pointing out to volunteers if a chair was vacant and a new child had to be brought in. Her efforts to provide the best resources for people with special needs in Pakistan have helped the country emerge on top at the Special Olympics and have fostered a sense of purpose for special persons in the country where opportunities for people with intellectual and physical disabilities are scant. 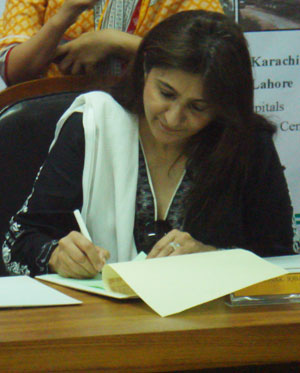 For special persons in Pakistan to avail this free eye care, they must register themselves with SOP — if they haven’t already done so — and sign up for different games. But in some cases, people with intellectual disabilities have severe physical limitations as well. During the training camp, most of the special children needed a volunteer to guide them around the room, just as any other six or seven-year-old would. However, there were a couple of children that needed assistance to just sit and stand. When one such boy walked in through the doors of LRBT, Lakhani revealed that for physically challenged athletes they have devised simple games for which they get rewards.

These small encouragements go a long way and thanks to SOP, there are many stories of triumph. Special athlete Jahanara told me that when she was a child, a doctor told her parents that she would never speak or walk. Not only did Jahanara go on to walk, but she won medals in swimming at the Special Olympics and also gave the welcome speech at the camp before the LRBT-SOP agreement was signed. Confident and articulate, Jahanara emphasises the important role SOP has played in her life and how competing in the games not only helped her become physically stronger, but also made her feel like a valuable part of society. She was at the training camp not just to get her eyes tested, but also to assist the doctors in working with the special children — truly coming full circle.

This article was originally published in the June issue of Newsline under the headline “Special Milestones.”