The ‘Shanakht’ portraits by Akram Dost Baloch confront the audience with many unanswered questions as they attempt to pierce the screen of apathy. The deep despair and anxieties frozen into the features are not dissimilar to Munch’s ‘Scream.’ which according to the artist resonates through art history to epitomise anguish, just as Guernica has become the symbol of the cruelty of war.

Akram Dost, who lives in Quetta and is a witness to the dark drama of oppression and carnage played out every day, confesses his portraits can easily be about the silent screams of mothers who claim the brutalised bodies of their loved ones or wait with gnawing uncertainty for family members made anonymous by the politically correct label of ‘missing persons.’ Sensitively created in smoky grey with graphite/charcoal rubbed into paper, the strokes fuse into tonal layers and give angular starkness to faces whose sunken eyes are difficult to forget. The display of the works in a single row at eye level, reinforces the single question each face asks…. why ?

What does an artist do when all signatures on human rights declarations are rendered redundant and jungle law takes over to create killing fields? He shares the torment by documenting the narrative of suffering, as Akram Dost has done.

The artist expands that the work is also about an identity denied and his people’s long state of disenfranchisement. One such example is Mehrgarh, Balochistan’s oldest civilisation of the region which remains willfully absent from the national historical discourse. The construct of the Balochi stereotype through propaganda has created an ‘other’ that echoes with memories of divisive, colonial strategies. 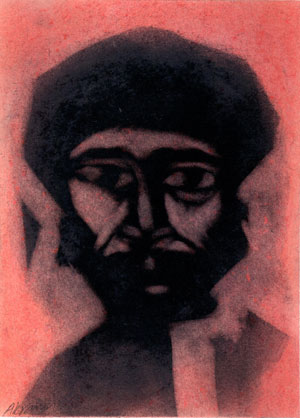 Akram Dost’s art has worked for long to privilege the Baloch identity from a Baloch perspective. From this comes the title of the show, ‘Shanakht,’ that was held at Karachi’s Koel Gallery this May. It is both his search and his seal. Before Akram Dost studied at National College of the Arts, he tried his hand at carpet designing and studied the motifs of Balochi crafts that have stayed with him and become intrinsic to his art. Even in the portraits, patterns and motifs surreptitiously, subconsciously, slip in, like sentinels of the past. This assertion of cultural identity is reflective of Balochistan’s syncretic past that has shaped customs, language and the way of life for the people. Having left behind the polychromatic palette and patterns of his earlier works, the present mood is reflective and sorrowful as colour is leached by harsh black shadows that replace all that was once joyful.

The six decades of development neglect in Balochistan has also impacted the growth of art in the province. The Faculty of Fine Arts at Balochistan University too has been its victim. Founded in the 1990s by Jamal Shah, Akram Baloch, who has been long associated with it and headed it for some years, has been struggling to keep its doors open for the talented young. Faced with a paucity of facilities and funds, the department has not lived up to its potential and many students still have to travel to other parts of the country to study art at better institutions. The long unrest has arrested financial progress and with it, diminished prospects for a vibrant art scene. All this has created a deadlock for local talent, which is responsible for the lack of a robust representation by a new generation of Balochi artists.

It is Akram Dost’s commitment that keeps him from abandoning his students despite offers to work outside Balochistan and the country. He continues to hold the fort and do what he believes in, as he prepares the young to express the Balochi shanakht with pride and courage. 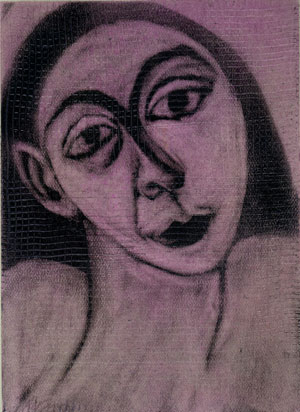 In the 1960s, Sadequain depicted intellectuals with a pen dipped in blood to empathise with the hardships that came with their role as visionaries in society. He also painted the intellectually dishonest imprisoned in cobwebs to symbolise decadence. These were potent statements on the challenges faced by a young country and became a reminder that artists, writers and scholars must lead a society for peace, tolerance and real progress. Shortly after independence, Faiz Ahmed Faiz alluded to the same in his columns, outlining a cultural manifesto for a nascent Pakistan, before the guillotine of censorship was sharpened against him and his peers.

Akram Dost lives in Quetta, a city that has seen considerable brain drain and targeted killing of the creative vanguard. But, despite the risks, he chooses to remain there and chronicle the human cost of social rupture because he wants his students to be able to say, like Loung Ung, who penned the memoirs of her nation destroyed by the Khmer Rouge, “We are all here because someone somewhere acted and gave us a chance.”