The bullet-riddled body of Muzaffar Bhutto, secretary-general of the Jeay Sindh Muttahida Mahaz (JSMM), was found on the roadside, near Hyderabad last month. This was the first instance of its kind in Sindh when a missing Sindhi nationalist was found murdered in such a brutal manner.

Muzaffar Bhutto had been missing since February 25, 2011, when he was kidnapped from the National Highway near Saeedabad Town. This was the second time that Muzaffar had disappeared; earlier he went missing in October 2005 from Tariq Road, Karachi but returned later.

After his disappearance, his wife Saima Bhutto appealed vociferously to the international community and human rights organisations to help recover her husband. On February 19, she filed a petition in the Sindh High Court requesting that Muzaffar Bhutto be freed “from the illegal custody of the ISI.” The case was initially heard “in a serious manner,” rekindling Saima’s hope of getting Muzaffar back, “but gradually it lost its momentum.” Her fears turned to harsh reality when her 42-year-old husband’s corpse was brought home on May 22, 2012.

In recent years, the unlawful practice of enforced disappearances and extra-judicial killings in custody have risen drastically in the Sindh province. Muzaffar Bhutto was among several Sindhi nationalists who were kidnapped and and have been missing since 2005. And now, in a chilling reminder of the grim situation prevalent in Balochistan, bullet-riddled, smashed-up bodies of political activists are showing up in Sindh.

On April 21, 2011, three political leaders of the JSMM were killed when more than a dozen armed men ambushed their vehicle in Sanghar. According to a report of the fact-finding team of the Human Rights Commission of Pakistan (HRCP), the identities of the abductors were questionable: “Assailants, at least some of them who were in security agencies’ uniforms, attacked the activists’ car without provocation and targeted them in such a manner as to ensure that none of them survived. The car was later torched to ensure that the evidence of the grisly killings was destroyed.”

In Sindh, almost all political abductees appear to belong to various factions of the Jeay Sindh movement, with a majority of the missing persons associated with the JSMM, which is allegedly suspected of being involved in militant activities for the independence of Sindh.

According to federal government figures, the total number of missing persons said to have been picked up by secret law-enforcement agencies — from Sindh, Balochistan, Punjab and Khyber Pakhtunkhwa — stands currently at 416, with at least 54 of them belonging to Sindh. However, the Sindh Home Department quotes the figure as being 16. Though an accurate statistic of the missing persons is still not available, according to a rough estimate nearly two dozen workers of nationalist parties are currently missing or allegedly have been kidnapped by Pakistan’s security agencies.

Dr Mir Alam Marri, vice chairman of the Jeay Sindh Qaumi Mahaz (Areesar), who was kidnapped by security agencies from Hyderabad on March 5, 2012 and remained in their detention for four days, says, “My friend Ahmad Khan Teevano alias Raja Dahar, who was picked up by the agencies along with me, is still missing. But after the killing of Muzaffar Bhutto, we fear that he will also be killed by the agencies.” Dr Marri recalled the miseries and torture he suffered during detention and lambasted the agencies for their inhuman behaviour and illegal acts. “They were accusing me of terrorist acts and demanding that I give them information. I tried to convince them that as followers of G. M. Syed we believe in a non-violent struggle for the right of self-determination of the Sindhi nation.” He lamented the way his fellow activists were being tortured and killed by security agencies, warning that it could lead a peaceful activist to turn violent. He cautioned that if the abducted workers were not released immediately, it would trigger widespread anger and resentment among the Sindhi youth against the state and its apparatus.

Besides workers, some top leaders of various factions of the Jeay Sindh movement have also been kidnapped and kept in illegal detention. In February 2006, Dr Safdar Sarki, president of Jeay Sindh Tehreek, was taken away and detained for more than two years. On June 26, 2006, Mr Asif Baladi, General Secretary, JSQM, was allegedly abducted by unidentified armed men in broad daylight from Shahrah-e-Faisal. He remained in custody till February 2009. 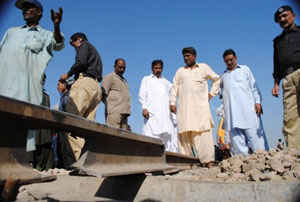 A sudden surge in disappearances was observed after more than a dozen bombs went off on railway tracks at various locations across Sindh, on February 25, 2012. Though the blasts did not cause any casualty or massive damage to the railway tracks, the incident was taken very seriously by law-enforcement agencies. The police blamed the Sindhu Desh Liberation Army (SDLA) for carrying out these blasts and accused Shafi Burfat’s organisation, the JSMM, of being behind the blasts. The police reported that flyers of the SDLA were collected from the site of the blasts. Similarly, on May 2, 2012, approximately 11 blasts that targetted ATM Machines of the National Bank of Pakistan were reported in different districts of Sindh. Then, on May 25, 2012, five gunmen attacked a bus with passengers travelling from Karachi to Attock on the National Highway, near Qazi Ahmed town, and killed six passengers and the driver. The police claim that pamphlets of the SDLA were discovered from the spot.

Though the JSMM has not directly claimed responsibility for such incidents publicly, the police maintain that they have ample evidence that the SDLA is involved in terrorist activities. In the meantime, families and political parties of the Jeay Sindh movement are organising protest rallies and token strikes in almost every district of the province to raise a voice against the disappearance of their workers.

Understandably, family members of the missing students and activist workers of the JSMM are not filing any complaints against intelligence agencies because of the palpable fear that if news of their disappearance is leaked, their loved ones could be brutally murdered in the same manner that political insurgents are being murdered in Balochistan. The Sindh High Court has called up cases of kidnapped persons and is directing law-enforcement agencies to produce the missing persons in court. But Dr Mir Alam Marri is of the view that unlike the Supreme Court, which is more proactive in Balochistan, the Sindh High Court is not taking up these cases on a priority basis.

However, nationalist groups in the province have become very active in mobilising the public into holding demonstrations to protest the kidnap and murder of their activists. The nationalists have further been provoked by the wall chalkings demanding a separate Mohajir province that have appeared overnight and the firing on their anti-Mohajir Suba rally held subsequently in Karachi in which 11 people were killed, including three women.

The rising ethnic tension in the urban areas of Sindh and the rapidly deteriorating law and order situation pose a real challenge to the authorities. Following the firing on the rally in Lyari, President Asif Zardari and Prime Minister Yousuf Raza Gilani formed an action committee comprising Makhdoom Amin Fahim, Khursheed Shah, Maula Bux Chandio and Naveed Qamar. Their task is to meet with political parties and civil society organisations and address problems arising out of the firing on the rally. But while they set out to tackle the task at hand, it is unfortunate that the high-ups have not taken any serious notice of the cases of missing people and the extra-judicial killings of Sindhi nationalists.

After Muzaffar Bhutto’s brutal murder, there is a looming sense of fear and uncertainty among the families of missing persons. “My wife is worried sick about the fate of our son, Asif Bhutto, ever since she came to know about the death of Muzaffar Bhutto, who was my maternal cousin,” says Rafiq Ahmed Bhutto, an employee of Jamshoro thermal power plant. His son, Asif Bhutto, was picked up on May 16 from the Powerhouse Colony. “Endless visits to police stations have been futile; we still do not know where our son is detained.”

This article was originally published in the June issue of Newsline under the headline “Dead on Arrival.”