Photography, sculpture and poetry come together in the exhibit titled ‘Chiselled Poem’ at the Photospace gallery last month.

Photographer Arif Mahmood’s camera captured the sculptures — 144 pieces in all — made by renowned artist Shahid Sajjad.

The photographs, bar one, were all in black and white. It is easy to see why Arif Mahmood chose to photograph the well polished, chiselled sculptures as they catch the light so well. Sharp edges reflect the light which appears stark white in contrast to the deep grooves which create a niche for shadows. Criss-cross marks made by the chisel created a pattern of dark and light that lends itself well to black and white photography. 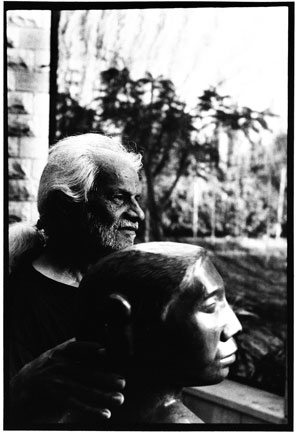 Each photograph has a calligraphic inscription of Urdu poetry mostly by Ghalib, Mir or Faiz. The verses were chosen by Zehra Nigah, who selected them after looking at the photographs.

There are three people’s perspectives on display, explains Arif Mahmood. There is Shahid Sajjad’s perspective since he created the sculptures. Then there is Arif Mahmood’s interpretation as he views the pieces from his lens. And finally, Zehra Nigah’s take on the pieces as she selects couplets that reflect the mood of the work.

This art review was originally published in the June issue of Newsline.