As Moharram approaches, people across the country are on tenterhooks and praying that Ashura will pass by peacefully, without any untoward incident.

Yet, year after year, Ashura is marked by violence. And so it was this year too — despite the tall claims by law enforcement personnel, of having foolproof security measures in place.

The venue was Rawalpindi’s Raja Bazar, where anti-Shia inflammatory speeches from a mosque when the Ashura procession was passing by, led to major violence in which 12 people were killed and nearly 100 shops set on fire. The violence spread to other parts of the country, threatening to develop into a full-scale sectarian war. But saner elements stepped into the fray, and doused the fire.

Has the country’s security apparatus not learnt anything from past incidents?
Every year, come Moharram and the law enforcement agencies, in their wisdom, impose a ban on pillion-riding, block cellular phone services, ban the entry of fiery clerics in certain cities or impose curfew. Be it the civilian governments of the Pakistan People’s Party (PPP) or the Pakistan Muslim League – Nawaz (PML-N), or be it the army, the national approach to fighting terrorism and sectarianism does not move beyond these futile, stop-gap measures.

In theory, we are a nuclear power and, for a majority of our population, the lone citadel of Islam and the leaders of the Islamic world. But the ground reality is that we are a state at war with itself, a state sans the state’s writ. The society is being governed by non-state actors — terrorists, religious extremists, clerics and criminals. The state has cowardly ceded its writ to non-state actors, of which the most powerful are the jihadis and sectarian outfits who are exceedingly well-organised down to the street level. The sectarian killings and riots this Ashura are a testimony to this grim truth.

Handling Ashura processions should be a routine task for societies that have an efficient law and order system and do not patronise elements that preach religious/sectarian hatred. But Ashura processions in Pakistan have posed a tough challenge to our law and order agencies since the late ’70s, when the army dictator, General Zia-ul-Haq started promoting religious/sectarian hatred as part of his state policies, in order to justify and prolong his illegitimate rule. Jihadis and sectarian vandals were given a license to kill, because they formed Zia’s main constituency. Zia nurtured them for 11 years, with financial support from Saudi Arabia and other Arab nations. All the jihadi and sectarian outfits that we see flouting the state’s writ so blatantly in every nook and corner of the country today, owe their existence and proliferation to the general.

Ironically, the secular PPP that came to power thrice after Zia’s death, could do nothing to contain their influence. In fact, by not confronting them head-on, it allowed them to flourish. As far the PML-N is concerned, it was an extension of Zia’s coterie. Hence, it was barely surprising that the Nawaz government, during its two stints, further strengthened them, possibly in the vain hope that they would support him in his desire to become the country’s ‘Amirul Momineen’ through the passage of the Shariat Bill.

It was our last army ruler, General Pervez Musharraf, who, in January 2002, banned five militant outfits: the Sipah-e-Sahaba, Lashkar-e-Taiba, Jaish-e-Mohammad, Harkat-ul-Ansar and Tehrik-e-Jafaria. But this ban was imposed not in the wake of the realisation that the growing militancy, sectarianism and religious extremism were eroding state power. Rather, his decision was a consequence of international pressure applied in the wake of an attack on the Indian parliament on December 13, 2001.

The ban was a joke. The same outlawed outfits re-emerged under new names, but with the same mission of promoting religious intolerance, hatred and militancy. In effect, the same wine was bottled in the same bottle; only the label was changed. Lashkar-e-Taiba became Jamatud Dawa; Sipah-e-Sahaba is now the Ahle Sunnat Wal Jamaat (ASWJ); Jaish-e-Mohammad is Khaddamul Islam; Tehrik-e-Jafaria is Islami Tehrik Pakistan and the Harkat ul-Ansar is now Ansar-ul-Ummah. These banned outfits obtained new declarations for their venomous publications. Additonally, they purchased new domains for the propagation of their activities on the Internet.

During the PPP rule, the jihadis/sectarian outfits started making use of the social media to extend their dangerous mission, not only in Pakistan, but across the world. However, instead of banning the provocative pages, the PPP government blocked all those Facebook pages and Twitter accounts that raised concerns about the rising militancy and sectarianism in the country. The electronic media too played a very negative role; it glorified the jihadi/sectarian militants. After the killing of 12 people in Rawalpindi in the recent sectarian violence on Ashura, Mohammad Ahmad Ludhianvi (the chief of ASWJ) was given excessive time by different TV channels to air his views. His tone against the Shias was threatening and, as a consequence, the sectarian violence spiralled out of control and reached Kohat, Hangu and Multan. This resulted in the killing of a renowned liberal educationist Shabbir Shah, a professor at Gujrat University, and several others. 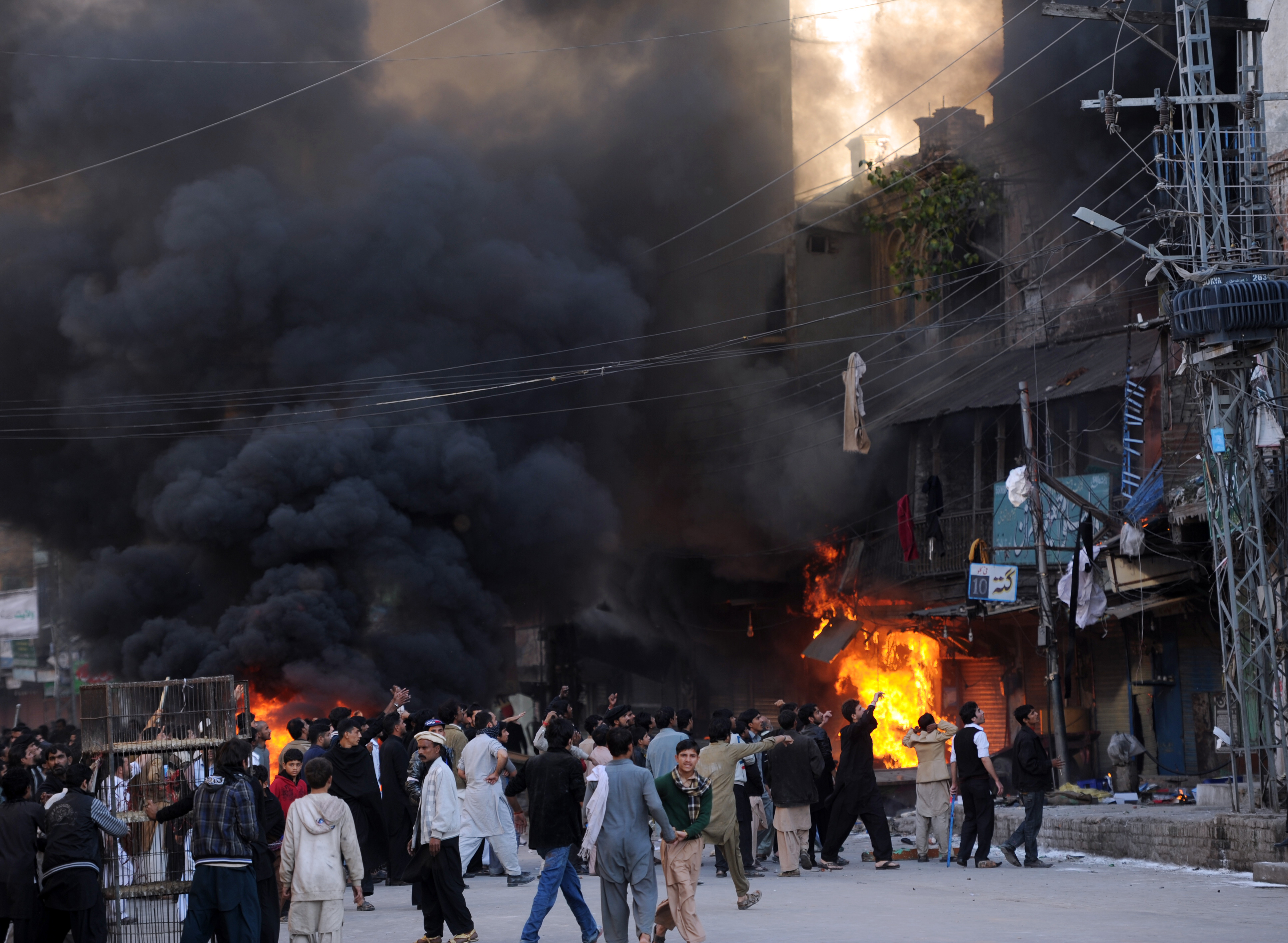 Ludhianvi made a fiery speech in the presence of thousands of people in Rawalpindi on November 22, to protest against the Pindi killings. Anti-Shia slogans were chanted during this speech, but no action was taken against him. In fact, chanting the slogan ‘kafir kafir, Shia kafir (Shias are infidels)’ and chalking the same slogan on walls has become kosher in Pakistan, despite the fact that there is a law against spreading sectarian hatred. Similarly, there is a law to regulate the use of loudspeakers, which was promulgated in 1965. But it has never been implemented, just like the law against provocative literature.

Even Prime Minister Nawaz Sharif was unaware about the existence of such laws. In fact, after the Pindi killing, he announced that the misuse of loudspeakers would not be allowed. The crux of the matter is when police and law enforcement agencies are afraid of religious bigots, how can the law be implemented? When militants break out of jails in Pakistan and prison guards run away and seek shelter in sewerage lines, how can terrorism and militancy be fought forecefully? Moreover, when law ministers are hobnobbing with sectarian outfits like the Lashkar-e-Jhangvi, how can one arrest the menace of sectarianism? 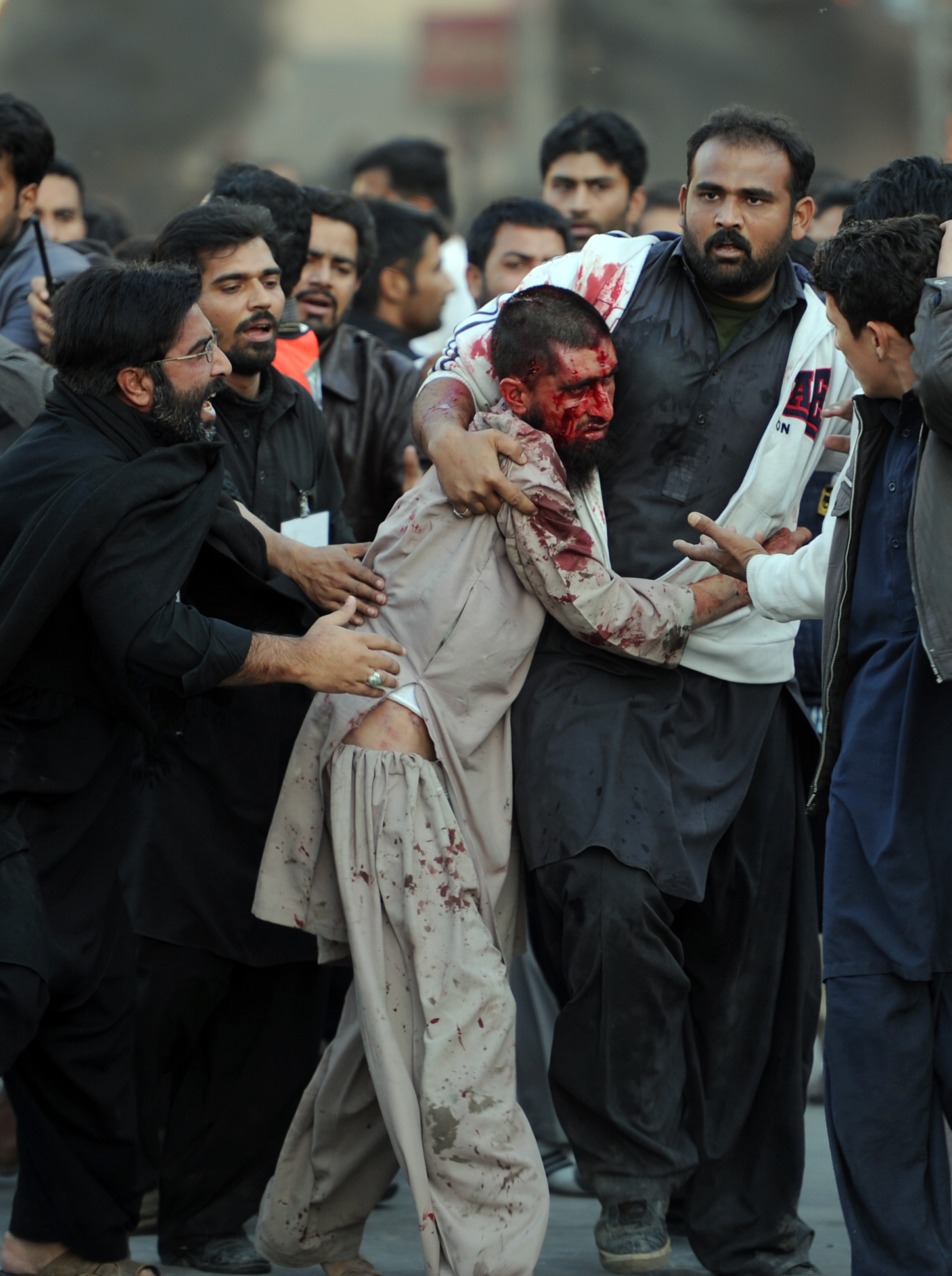 Today, we have reached a stage where our most powerful institutions have become helpless before the terrorists and religious extremists. The death of Tehrik-i-Taliban Pakistan’s chief Hakeemullah Mehsud revealed that his house was just a kilometre away from the army headquarters in North Waziristan. The son of Jalaluddin Haqqani — Naseeruddin Haqqani — was assassinated in Islamabad and his dead body reached North Waziristan overnight. You and I, mere civilians, cannot even travel to North Waziristan.

If the Nawaz Sharif government is serious about tackling terrorism and sectarianism, then as a first step, the banned outfits’ leaders, office-bearers and members should be stopped from operating another organisation under a different name, and their offices should be sealed so that they cannot be used for any acts of terrorism, militancy or sectarianism.