The two-person show at the Indus Valley School of Art and Architecture School, titled Silver Linings, featuring 17 artworks by up-and-coming artists, Saba Qureshi and Ramzan Jafri reflected a fresh perspective through the use of techniques rarely seen on the Pakistani canvas. Upon entering the gallery, one could sense what curator Hajra Haider meant when she said that the artists “approach their narrative through dreams and imagination,” which are a reflection of their personal experiences.
Qureshi’s chosen medium is ball-pen and acrylic. The first of her four pen-on-paper sketches revolve around a whimsical fantasy theme of a young woman playing with an elephant half-submerged in water. The subject of her collection engages its viewer and takes them into a world of endless possibilities. Qureshi’s first four ballpen-on-paper sketches, ‘The Mirror Reflects A Treasure,’ illustrates a young woman, resembling a deity, as she sits on an elephant. The remaining three sketches encapsulates the progression of the elephant’s reaction to her, from its coyness that is captured in ‘The Key Lies In Your Soul,’ to the jubilation that the animal expresses by spraying water on her in ‘It Leads Me to the Water’ and, finally, to its eventual disappearance in ‘The Heart Has Eyes and Ears and Nose.’ The sketches may be in black and white, but that does not detract from the charm of Qureshi’s work. 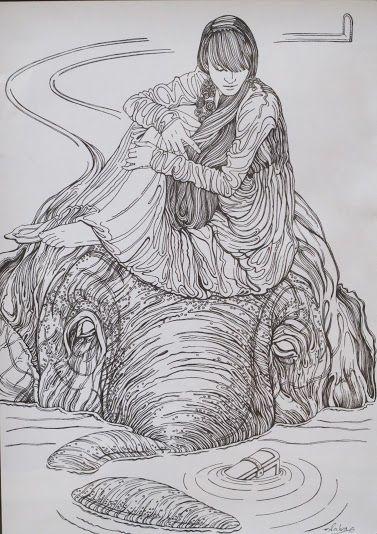 The second artist, Ramzan Jafri’s collection, with its overpowering sense of sentimentality, offers a striking contrast to the celebratory mood of Qureshi’s work, as he takes on themes of violence and sectarianism that plague our society. Upon closer inspection, one can see the elaborate detailing in his creations through the use of gauze and pen on wasli paper. The added textural element that the gauze brings to his work truly creates interesting, multi-dimensional pieces. One of the creations that particularly stands out is ‘Gull Goh Qabah.’ The intricate details of this work mesmerise the viewer. ‘Untitled II’ appears to be a piece of torn and blood-soaked cloth. Although every artwork of his creates an image of a violent aftermath, this piece is the closest depiction of Jafri’s theme.
Both artists bring a whole new perspective by using techniques rarely seen in realm of Pakistani art, and their creations are subtle and sophisticated. Qureshi’s work tells its viewers a story as it transports them to a fantastical world of tranquility, whereas Jafri’s art leaves you in awe of the complexity and the adroitness it is masking with its fragile appearance.
Silver Linings showcases the simplest of human longings, peace, that is now seen as a fantasy riddled by the reality of day-to-day violence.