What is the true essence of beauty? Does it lie in the eye of the beholder or is it manifest in the crafted object itself — or is it a coming together of kindred spirits — that of the maker and the beholder, the magical moment when a common chord is struck across the barriers of time and space. Just such a chemistry ripples through the pages of Tana Bana — the Woven Soul of Pakistan.

Written and compiled by Noorjehan Bilgrami, this volume was recently launched on the occasion of the exhibition, ‘Tana Bana’ (April-May, 2004) held at Nihon Mingeikan, the Japan Folk Art Museum in Tokyo. On the surface it doubles as a dazzling, pictorially rich catalogue and a compendium of our traditional textiles. But it is the inner rhythms pulsing through the text that urge viewers to respond intuitively to the collection and be “part of the weave of the makers whose spirits are embedded in the cloth.” Bilgrami tries to awaken in her readers that rare sentiment — a genuine respect for the nameless craftspeople and their craft.

A chapter devoted entirely to Soetsu Yanagi gives added breath to the volume as it defines Bilgrami’s wellspring of inspiration. A visionary, Yanagi initiated a major crafts movement in Japan extolling the virtues of “folk art made by the people for the people” in the 1920s, when the country was in the grip of ever increasing modernisation. A staunch advocate of Mingei — the people’s craft — he emphasised that this art should be “honest to utility, simple in form, durable for everyday use; produced in quantity; affordable in price; and have a regional quality to it because it is used locally with available material.” Today, the Nihon Mingeikan continues to perpetuate this legacy through its exhibitions and vast permanent collection of craft art. 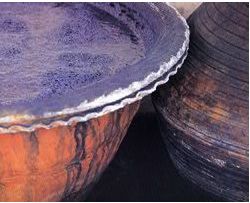 Emulating the Mingei spirit, Bilgrami has delved deep into the textile arts of Pakistan to address the subject across many levels. Assembling the Tana Bana exhibition was an awareness development and promotional venture. A number of serious collectors supportive to the cause generously loaned their collections and the emergent display comprising some of the finest specimens of textiles in Pakistan provided the lavish visual content for this book. Likewise, chronological documentation of the illustrated material based on researched scholarship identifying the textiles in the backdrop of history and regional culture, is also a contribution of several authors.

A brief overview of prehistoric textiles in the Indus Valley region by Jonathan Mark Kenoyer examines the earliest visible reference of woven cloth in the light of archaeological artifacts of Moenjodaro, Harappa and Mehrgarh. His findings detect the use of wild cotton, silk and wool as the basis of different styles of clothing in the earliest urban centres.

The past and the present of stitchcraft is laid threadbare by Shehnaz Ismail in her piece on embroidery from Swat Kohistan, Swat Valley and Hazara. Needlecrafting of tree and floral motifs (phulkari and bagh designs) chevrons, solar images, geometric triangles, medallions, etc. are traced to the Bactrian, Buddhist and Ghaznavid influences, but it is her analysis of current depletion of embroidery heritage that needs to be taken into account on a serious level. She feels the surge of designers, collectors and crafts shops has robbed the Swat Valley of its embroidery heritage. The Swati women no longer use it for apparel or household purposes, the vocational centres set up to train women in this art form are mediocre, handspun silk floss has given way to machine-made thread and the terminology of the motifs has changed.

Debating on the continuity of tradition, she argues that if the craftspersons were not dictated to they would perhaps go on creating their own tradition with images and icons of their life today. But will this contemporary production be as marketable as the traditional embroidery? Economic constraints and the impoverished status of the craftsman are also some of the drawbacks that retard the creative process and prevent it from achieving its due place in society.

The humble art of ralli-making is examined at length by Patricia Stoddard. Quilt making is common to folk art the world over and in the west its status has shifted far beyond the traditional styles to some very experimental, abstract versions. Our indigenous style of patchwork art is quite unique, creative and extremely intricate but ralli art, like most local craft here, is underappreciated and undervalued. 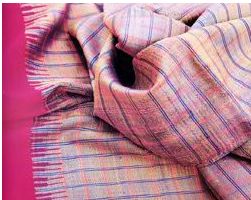 Noorjehan Bilgrami’s own findings detailed in her write-up, ‘Tana Bana: the Woven Soul of Pakistan’ thread through the Mughal era, the glorious heyday of the woven cloth when the craft was at its zenith. And then the eclipse set in when “The British showed a complete disregard for the intrinsic reverence the people of the subcontinent had for the fabric they produced. The British viewed the fabrics as merely practical, utilitarian objects from which profits could be gained.” The downslide was hastened when the Industrial Revolution became all-encompassing and the power loom overtook the handloom.

Bilgrami’s revivalist tendencies are clearly evident in her text on ‘Ajrak — Cloth from the Soil of Sindh,’ and ‘The Mysterious Nir.’ Documenting the tradition of block printing of Ajrak entailed intensive research which began in 1986, resulting in an independent volume, Sindh jo Ajrak, and a documentary video. She reiterates that “due respect and recognition” has to be accorded to the craftsman to ensure continuity of these crafts skills onto the next generation.

During her research on Ajrak, Bilgrami stumbled onto the plight of Nir, the elusive indigo plant which yields the fabled indigo dye. She discovered that, save for a sole cultivator, Ilahi Buksh Gazar in Budh, Multan, its cultivation, processing and usage had been completely wiped out by the onslaught of synthetic dyes.

As with her Ajrak project, Bilgrami recounts the revitalisation of Nir in her article. Spearheading a pilot project in partnership with Masuma Lotia and the Forest Department of Sindh, she reintroduced the plantation, extraction and use of indigo as an organic dye. Accompanying these informative writings is a very rich and graphic photo record of the selected stages of ajrak printing and Nir processing in interior Sindh, whose value is self-explanatory.

If all this can be considered trailblazing then the concluding chapters on pioneer collectors is no less inspiring. Formerly, occasional display of pieces was all one could connect with the idea of “collections.” In the context of art, it is only lately that the collecting habit and the collectors are being identified and documented. Their role in preserving tradition and contributing to its continuity cannot be underscored. In the absence of regional and national craft museums (excepting Lok Virsa) the value of such collections is undeniable.

Bilgrami locates her own inspiration in Mrs. Shireen Nana. who first awakened in her “the sensibilities to understand textiles,” and feel the love and labour imbued in the rich weaves. Salima Hashmi credits her mother Alys Faiz for nurturing these very sentiments in her progeny. Alys Faiz wrote extensively on the need to “save, nurture and revive” the crafts in her newspaper columns and together with Anis Jahangir, scoured the countryside for artifacts and “laid the foundation of the first public collection of folk art from all over Pakistan.” Samina Ibrahim’s earliest memories are of trips into the remote villages of Sindh with her mother. She was another inspired connoisseur who went on collecting sprees in areas few had ventured, or even thought about doing so, in those days. All these ladies possessed that “innate perception to see beauty in the humblest things.”

This book project is the result of a team effort efficiently and intelligently coordinated by Bilgrami to the last detail. It has enjoyed the support of the government and the private sector. Contributions of the collectors were crucial and Sheeraz Vania’s design team and Tehmina Ahmed’s editorial work put it on a firm footing. Photography by Irfan Naqi and Momin Zafar deserves special mention. Brilliance of hues, sharpness of imagery and exquisite attention to detail, with a view of disclosing the warp and weft, stitchcraft, embellishment and motif pattern was projected most effectively. Shell and Parco are the two companies that provided much needed financial support for the publication

The sumptuous visual content in the book is quite overwhelming and momentarily detracts the viewer from the text. As such it needs to be savoured at leisure because the contents are informative without being overly heavy or sentimental. As a composite work the book is hearty and fulfilling. Like recorded music albums that gain a life of their own beyond the live concerts to which they pertain, such journals also exist as independent volumes far beyond the exhibitions to which they are related.