Bomb blasts targeting Chinese engineers in Gwadar on May 4, policemen in Quetta on May 24, and rocket attacks on Gwadar airport and on Mund, have injured 15 people and claimed five lives over the past month, including those of three Chinese nationals. The attacks shook the country as the main target has been the country’s future economic nerve — the Gwadar port. The Chinese citizens were employed by a Chinese construction company building the country’s third port and Balochistan’s first deep-water port in the coastal town of Gwadar. The project, with an estimated cost of 248 million dollars, is due for completion in June 2005 and work on the first phase of the project commenced in 2002.

As the injured parties later told police, 12 Chinese, their Pakistani driver and a police guard, were en-route to the project site from their camp. As soon as their Mercedez van slowed down to cross a speed-breaker on the fish harbour road, a powerful blast occurred, killing three engineers instantly. Police believe that explosives planted in a white-coloured Suzuki Mehran car parked near the speed-breaker were detonated by remote control. Four of the injured, including the police guard, were shifted to Karachi for better medical aid.

After the incident, the Balochistan Governor rushed to Gwadar alongwith Chief Minister Jam Mir Mohammad Yousaf, to review the security situation on the directives of the federal government. The IG police remained encamped in the area for a week to personally ensure the security of the Chinese nationals working on the deep-sea project. Security was beefed-up between their camp and workplace as well as within their residential compound and project site by deploying hundreds of men. Police forces were called in from other coastal towns such as Jeevani and Pasni, to prevent saboteurs from making such attempts in the future.

Initially 18 suspects, including nine Marri tribesmen who run scrap businesses in Gwadar, were arrested. According to police, four of the suspects were allowed to leave after preliminary investigations while the rest were detained. The government subsequently assigned senior police officials from both Balochistan and Sindh the task of tracking down the culprits.

Even before the federal and Balochistan governments had time to recover from the terrorist attack, Gwadar airport was attacked by rockets at midnight on May 21. The attacks caused no damage as all the rockets missed the airport building. However, an oil-tanker driver sustained bullet injuries when, according to police personnel, Airport Security Forces opened fire in all directions to respond to the terrorists.

The Gwadar attack was followed on May 24 by a bomb blast in Quetta which injured 15 policemen. On a routine patrol on the outskirts of the provincial capital, the policemen were riding in a truck which slowed down to cross a speed-breaker when a bomb, planted in an abandoned bicycle, went off.

Again, a week later, on the night between May 30 and 31, the saboteurs fired over two-dozen rockets on Mund, resulting in the death of a 14-year-old boy and his father, and injuring four others, including two women of the same family. Mund, the home-town of Education Minister, Zubaida Jalal, is approximately 850 kilometres south-west of Quetta. According to officials, the intended target, the Frontier Corps camp, remained unscathed as most of the rockets landed in and around the camp’s open grounds, causing no damage. However, the buildings of a school and tehsil office were partially damaged. One of the rockets landed on a house, piercing its roof before it exploded, killing one person on the spot, and injuring five others, one of whom succumbed to his injuries in the hospital.

Rocket attacks and bomb blasts have been a regular feature in the provincial capital, particularly its cantonment areas, Kohlu and Sui town, for the last four years, and have claimed over 25 lives. Police have recovered big caches of arms and ammunition, including rockets, but have failed to arrest any of the culprits involved.

Initially, the investigating agencies and police did not rule out the involvement of Islamic fundamentalists in the attacks against the Chinese engineers. However, those in political circles are doubtful that terrorist arracks would be carried out by extremist groups against a project which could threaten US interests in the region. Chief Minister, Jam Mir Mohammad Yousaf, has also rejected the possibility of the involvement of Al-Qaeda or other fundamentalist groups in the terrorist attacks on the Chinese engineers, declaring that some local elements may be involved instead. 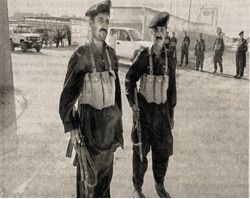 The government and its agencies believe Baloch nationalist groups opposed to the mega-development projects and the construction of cantonments in Balochistan may be responsible. “Everybody knows who the parties behind these acts of terrorism are. It is definitely the Baloch nationalist parties,” says a senior police official.

This view is borne out by statements of various nationalist leaders who claim that the terrorist attacks are part and parcel of the Baloch struggle for liberation from the clutches of Punjabi-dominated Islamabad. “I do not really know who they are, but I appreciate the actions of those who have masterminded and executed these actions, and I hope a Baloch is involved,” stated the head of the Pakistan Oppressed Nations Movement (PONM) and former Chief Minister Balochistan, Sardar Attaullah Mengal. “What Islamabad terms terrorism is in fact the legitimate struggle of the weak, undertaken in self-defence, and those who sacrifice their lives do not care how many lives their actions take,” he said. Similar statements were made on record by Hairbyar Marri, former minister Balochistan and the son of renowned nationalist leader, Nawab Khair Bakhsh Marri. “I must salute those who carried out these attacks in Gwadar and other parts of Balochistan, as they are part of the Baloch national struggle for liberation from the yoke of Punjabi colonialists, which burns in the heart of every Baloch,” said Marri, an absconder in the late Justice Marri case, over the telephone, from London.

The parliamentary nationalist parties have, meanwhile, expressed regret over the loss of the lives of the Chinese nationals and reiterated their commitment to the project. Jan Mohammad Buledi, an MPA of Dr Abdul Hayee’s Balochistan National Party (BNP), tabled a resolution in the Balochistan Assembly on behalf of the opposition to condemn the Gwadar incident and expressed his grief over the loss of lives. The opposition parties also participated in a one-minute silence to pay respect to the departed souls of the Chinese engineers involved in the development of the province. This was followed by Hairbyar Marri criticising the BNP for tabling the resolution, stating that the party and its leaders wanted to please the rulers. “The BNP, a so-called nationalist group, wants to suck up to the Punjabi rulers and is playing a double game of running with the hare and hunting with the hounds,” he said.

Sardar Akhtar Mengal, former chief minister Balochistan and head of his faction of the Balochistan National Party, although expressing regret over the loss of human lives, stated that the terrorist attacks were a natural consequence of unjust government policies, as every action causes a reaction.

While politicians breathe sound and fury, the confrontation between Islamabad and nationalist forces on the Gwadar mega-project and construction of cantonments in different areas of the province is mounting. The acquisition of land for cantonments has already started in Dera Bugti and Kohlu agencies, but local tribesmen in Dera Bugti have refused to sell their land to the government. The forceful evacuation of people in Sui town engendered protest in front of the assembly building on the eve of its previous session. The nationalist parties’ alliance, PONM, have just finished a month-long tour to mobilise people across the province against the Gwadar port and cantonments. Despite government efforts to sabotage the movement, the Jamhoori Watan Party succeeded in staging a seminar for nationalist forces and ARD component parties in Quetta. Through a declaration, the seminar’s participants, including the mainstream political parties PPP and PML(N), strongly opposed the construction of cantonments and demanded that the government drop the project, declaring that the benefits of Gwadar’s development must go to the locals and the Balochi population alone.

The government, in a half-hearted counter-effort, asked the newly-formed Pakistan Workers Party to arrange a similar seminar in local hotels to dilute the effects of the opposition campaign. However, not a single tribal personality or member of the political parties that really matter, participated in the government-sponsored seminar.

While provincial ministers of both the MMA and BNP (Awami) are supportive of the federal projects, their central leaders remain opposed. Maulana Mohammad Khan Sheerani, MNA and provincial head of the MMA, has warned the Baloch population against the construction of cantonments in various parts of the province and the Gwadar project. “The warring Baloch tribes must unite against outside interference in Balochistan by shunning their differences, and the federal government should refrain from any action against these tribes as it will cause a major clash,” Sheerani has stated.

In a press conference, the chief organiser of BNP(Awami), Senator Mohim Khan Baloch, while opposing the cantonments, has called for the government to remove the Baloch people’s apprehensions regarding the Gwadar port. “In the prevailing situation there is no need for the construction of cantonments in Balochistan, while the government must remove the apprehensions of the people of Balochistan regarding mega-development projects,” Mohim Khan said.

The nationalist parties have repeatedly asserted that the federal government’s discriminatory treatment of the province is an indication that these projects will only benefit the Punjabi elite, while the Baloch have nothing to gain from them.

The federal government has, meanwhile, approached Baloch nationalists for discussions on oil and gas explorations. The task of negotiating with Baloch nationalists Nawab Khair Bakhsh Marri, Sardar Mengal and Nawab Akbar Khan Bugti has been assigned to Dr. Abdul Hakeem Lahri, the head of the Balochistan National Congress, who has so far met with Attaullah Mengal and Bugti.

Senior officials also confirm that Islamabad has realised that a process of negotiations with nationalist groups and political personalities related to Balochistan needs to be initiated. Unless this process is started, the bomb blasts, which have continued to terrorise the province for the last four years, will not stop.