“Although there may be isolated cases of mistreatment of civilians and PoWs, this by no means reflects the general attitude.” Colin Powell didn’t utter these words last month, or even last year. He wrote them in 1968, in a memorandum to his superiors, while serving in Vietnam.

As the US Secretary of State recollected recently during a conversation with CNN’s Larry King, he was part of the company responsible for the Vietnam War’s worst known atrocity: the unprovoked killing of hundreds of children, women and elderly men — all of them unarmed — by a bunch of soldiers who had entered My Lai with the express purpose of eradicating all signs of life from the village.

It is interesting that Powell, who had joined the company after the massacre and was peripherally involved in an attempted cover-up, should have brought up My Lai during a discussion on the abuse of prisoners at Baghdad’s Abu Ghraib prison. The allusion was ostensibly thrown in to illustrate his point that extremely nasty incidents are almost inevitable during war, but he may also have been trying to send a message to the White House, whose cocky occupant-in-chief stopped listening to Powell long ago.

At the time of Vietnam, it took about 20 months for the horror story to intrude upon the consciousness of the American public. By then Richard Nixon was already losing the war on the home front, but the unadulterated brutality of My Lai undoubtedly increased pressure for a pullout.

That isn’t the only parallel with Abu Ghraib. Thirty-five years ago, embarrassed US officials sought to portray My Lai as an aberration. Of late, the Bush administration has been in damage-control overdrive, desperately trying to drum in the impression that a handful of deviant troops were exclusively responsible for all that went on in Abu Ghraib by night. It wasn’t true then and it isn’t true now.

In both cases, it was whistleblowers within the US army who raised the initial alarm. And the journalist Seymour Hersh went on to win a Pulitzer for his reports on My Lai. He’s still at it. After having been asked to hold off by General Richard Myers, the Chairman of the Joint Chiefs of Staff, the CBS television network was obediently sitting on grotesque images of prison abuse until it realised Hersh’s report on Abu Ghraib was about to be published. That’s when it decided to run them early last month. 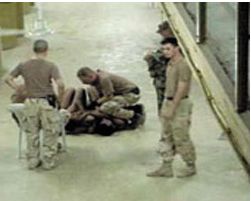 In a subsequent report, published in the May 24 issue of The New Yorker, Hersh makes the charge that the abuse was a direct result of aggressive interrogation tactics introduced at the behest of Rumsfeld and his Undersecretary for Intelligence, Stephen Cambone — who reportedly is inclined to overfulfill any tasks assigned to him.

The office that Cambone occupies was apparently created by Rumsfeld to gain greater control over covert operations, because he didn’t trust the CIA. A shadowy task force was subsequently set up to track down terrorism suspects anywhere in the world and to wring information out of those who were captured alive.

Hersh says the strategy worked reasonably well from the American point of view — until Rumsfeld decided to deploy some of these operatives in Iraq. Meanwhile, Major-General Geoffrey Miller, the head honcho at the detention facility in Guantanamo Bay, was despatched to Baghdad to inculcate more ‘effective’ interrogation techniques. The innovations led to what we’ve seen in the images published last month — and a great deal that remains unseen.

According to Hersh’s sources, the sexual humiliation that supplements other forms of torture isn’t a coincidence, nor was it thought up by a bunch of small-town perverts. Rather, it’s a part of policy, based on a reading of Raphael Patai’s 1973 book, The Arab Mind, which says that Arabs are particularly vulnerable to shame and humiliation. Patai’s book has been described as a neoconservative bible. And it’s also worth keeping in mind that Cambone’s military assistant is none other than Lieutenant-General William Boykin, who acquired a degree of notoriety for comparing the Muslim world to Satan in a speech last year.

Most of the seven military personnel against whom charges have been pressed for mistreating prisoners, claim that they were encouraged in their endeavours by intelligence officers who wanted the detainees ‘softened up’ before interrogation. That’s the classic Nuremberg defence — ‘we were only following orders’ — which was also employed by Lieutenant William Calley during his trial for the My Lai massacre. (To Nixon’s displeasure, Calley received a life-sentence, which was reduced first to 20 years and then to 10; eventually he was paroled after serving three-and-a-half years in jail.) 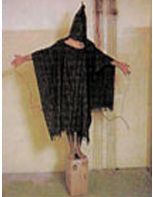 Writing in The New York Times last month, Luc Sante remarked upon their “jaunty insouciance” and “unabashed triumph at having inflicted misery upon other humans,” adding: “the last time I had seen that conjunction of elements was in photographs of lynchings” in the early 20th century.

That’s not an outlandish analogy; after all, it has to do with refusing to see other people as human beings. Where Vietnamese were referred to as ‘gooks,’ the favoured epithet for Iraqis is ‘hajis.’ And it isn’t just in prison that Iraqis are insulted in non-hostile situations. For example when, at a checkpoint on Baghdad’s outskirts, Baghdad University political science professor Huda Shaker, refused to let American soldiers search her handbag, one of them “pointed the laser sight directly in the middle of my chest, then he pointed to his penis. He told me, ‘Come here, bitch, I’m going to fuck you.’”

Shaker claims to know women who have been raped at Abu Ghraib, and American sources have confirmed that such things have happened. Men and boys have reportedly been subjected to similar degradation.

Prisoners have complained of being forced to take in pork and alcohol, of being compelled to insult their religion, of being sodomised with all manner of objects.

Whether such tactics have yielded any worthwhile ‘intelligence’ isn’t known, but it’s unlikely, given that the resistance continues to cause trouble on various fronts, and given that hundreds of Abu Ghraib inmates have been freed in recent weeks. Many of those ‘softened up’ for interrogation had no beans to spill, having been picked up for no good reason during random raids.

In a previous life, Graner was a jail warden and it’s not surprising that many of the tactics he favoured were borrowed from the US prison system. Never mind democracy, human rights and apple pie; at least something quintessentially American has been imported into Iraq.

The only thing is that the Geneva Conventions don’t apply to stateside penitentiaries, but they do in the case of occupied territory — and the US has managed to violate a variety of them. To cite a few examples, civilians must be treated humanely and violence to life and person, including murder, mutilation, cruel treatment and torture are prohibited. The Third Convention states that prisoners of war may not be tortured mentally or physically and no other form of coercion may be used during interrogation. The Fourth Convention says women must be protected against any attack on their honour, including rape and any form of indecent assault.

The US says PoWs as well as ‘security detainees’ (it was decided not to designate anyone in Iraq an ‘unlawful combatant’) are subject to the conventions. Which means their rights have been repeatedly violated.

Don’t be too harsh on the US, say the apologists; after all, those trapped in Saddam Hussein’s prisons were even worse off. Besides, most Arab regimes are pretty harsh on their opponents. That may well be so, but the question then arises: Does the US want its behaviour to be judged according to the moral standards of Arab regimes? The same question can serve as an effective riposte to those who argue that the Geneva Conventions have rarely been respected through most of the 20th century — by Nazi Germany and imperial Japan during the Second World war, for example. Besides, no one ever suspected that Hitler and Hirohito were fighting for democracy and human rights. Of course, a large number of people today have never harboured any such illusions about the US either. But some folks did. To their credit, many of them are currently busy removing their blinkers.

One of the most interesting phenomenon of recent months has been the process whereby traditional conservatives among the American intelligentsia have steadily been disabusing themselves of the silly notion that the Bush administration can be trusted to advance US interests. Quite a few of them have resolved that their nation’s salvation lies in a regime change at home and are gearing up to vote for John Kerry in November. Some, wary of Kerry’s intention to stay in Iraq, are even thinking of voting for Ralph Nader.

Meanwhile, diehard neoconservative apologists, a rapidly shrinking breed, claim with varying degrees of vehemence that the abuse at Abu Ghraib, unfortunate though it may be, is no excuse to dump an otherwise excellent project.

Perhaps they are right, not in praising a hopeless project, but in suggesting that the abuse scandal is part of a much wider context. The US is guilty of much more serious crimes than what has been taking place in Abu Ghraib and other prisons. Tens of thousands of Iraqis are dead. If that’s the only way of ‘liberating’ a nation, is it any wonder that other countries with dictatorships aren’t exactly clamouring for American attention?

At his trial in Baghdad last month, specialist Jeremy Sivits, the Abu Ghraib cameraman, confessed: “I have let everyone down … I shouldn’t have photographed those detainees.” He just didn’t get it. There was nothing wrong with the photographs — even though they were intended to serve not as criminal evidence but as conquerors’ trophies, as well as a means of blackmailing the compromised prisoners. It was the actions that were evil, not the images.

But there is hope yet for America. On the same day as Sivits, another soldier also went on trial. Sergeant Camilo Mejia served for six months in Iraq, then, having returned home on a furlough, he decided against going back. He had witnessed abuse of prisoners. He had seen children being dismembered by bullets. He was being court-martialled for desertion. Mejia, who is of Nicaraguan origin, was never comfortable with the imperialist project, but his conduct in Iraq was exemplary. He is wiser now. And his adopted country, as well as the rest of the world, would do well to heed his wisdom.

“There comes a point,” he told The Guardian last month, “when you have to realise there is a difference between being a soldier and being a human being.”