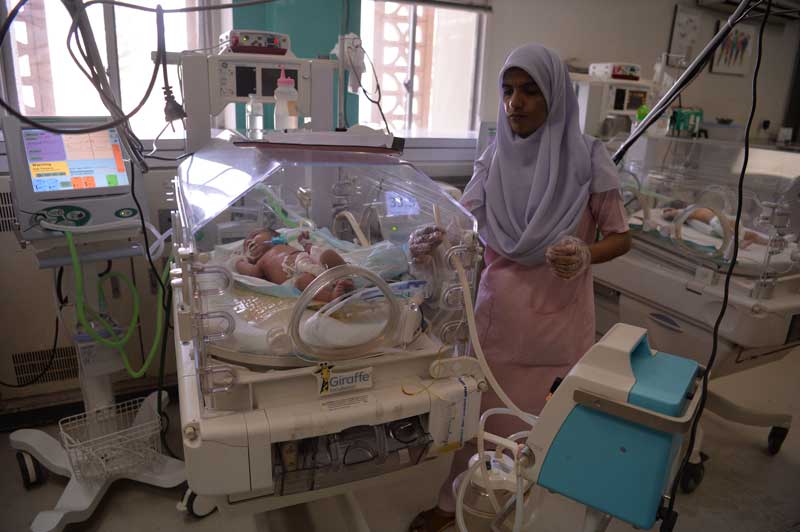 A nurse treats a newborn baby.

It is encouraging that, in his very first address to the nation, Prime Minister Imran Khan referred to three very important indicators of a country’s progress and development: maternal mortality, infant mortality, and childhood malnutrition. On all three counts, Pakistan lags sorely  behind. In fact, on almost all of these indicators we are at the bottom of world rankings.

The Pakistan Tehreek-e-Insaf (PTI) manifesto pledges to provide ‘Health Care for All’ by focusing on an ambitious set of interventions. These include introducing an expansive health insurance programme; increasing the numbers and coverage of the Lady Health Workers (LHW) programme; increasing availability of diagnostic facilities for communicable diseases; increasing the number of primary healthcare facilities; introducing incentives for doctors to serve in rural areas; establishing more training institutes for nurses and paramedics; upgrading the services provided at tehsil and district hospitals; establishing new, state-of-the-art hospitals; widening access and coverage of services through public-private partnerships; and enhancing mental health services.

The PTI’s 100-day agenda includes unveiling a health and education blueprint, detailing how access, quality and management of services will be transformed.

Three issues will pose immediate obstacles in implementing the health reforms agenda. Firstly, expanding and upgrading services will require a robust outlay of financial resources. Currently, public sector expenditure on healthcare is abysmally low, ranging from 0.6 to 0.7 per cent of the GDP. The combined public and private sector expenditures come to around three per cent. In comparison, regional countries, such as Nepal and Iran, are spending more than six per cent of their GDP on health. With competing interests, such as debt financing and meeting security needs, it is difficult to expect an increase in health expenditures in the near future. Moreover, huge investments are required to expand our existing human resources for health – not doctors, but paramedics and community-based workers. This will require additional budgets. 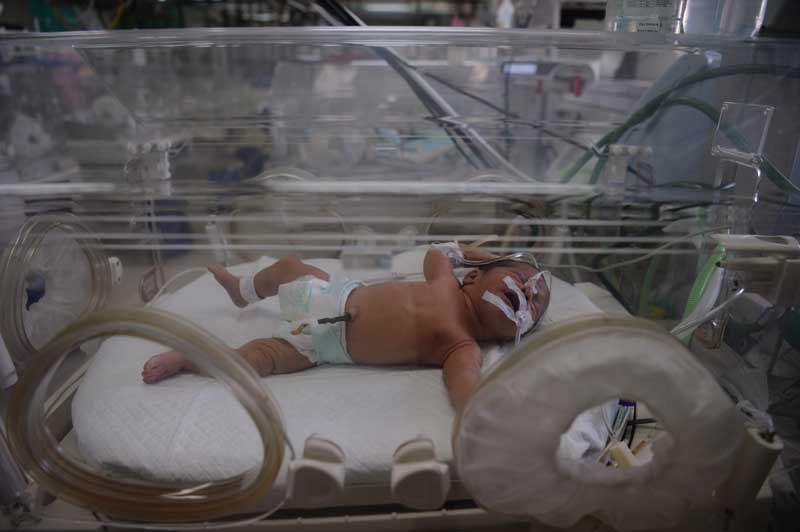 Secondly, the current high population growth rate of 2.4 per cent will continue to shift the goalpost of allocations upwards. We will never be able to provide health services to all unless the health infrastructure expands exponentially. For instance, at the current growth rate, we will require 56,000 additional doctors and 36,000 additional hospital beds within the next 10 years (applying today’s ratios). However, if we could lower the average annual growth rate to 1.7 per cent, we would need 39,000 additional doctors and 24,000 hospital beds.

Health inequity is compounded by the skewed distribution of resources between the primary and tertiary care services. According to the World Health Organisation (WHO), Pakistan spends 85 per cent of its health budget on tertiary care, which serves only 15 per cent of the population, mostly in urban areas. In view of these constraints, three elements should be prioritised by the government in its efforts to achieve better health outcomes for the people of Pakistan.

There must be focus on primordial prevention and health promotion. The government should articulate a health vision that particularly focuses on preventing the emergence of risk factors by altering environmental, economic, social, behavioural and cultural practices. Risk reduction should be the thrust of the health strategy and plans. Although health is now a devolved subject, the federal government can set directions and yield influence through fiscal allocations, legislation, and regulations.

Proven interventions that yield maximal health outcomes such as clean water and sanitation; hygiene education; lifestyle behavioural changes; and a reduction in irrational use of medicines, coupled with changes in dietary habits, can overcome the majority of non-communicable diseases, obviating the need for establishing and expanding expensive state-of-the-art facilities. Instead, we should invest more in research to identify cost-effective interventions that can reach a larger segment of the population. We also need to find out more about the social determinants of health and how these can be modified, and obtain better epidemiological data to help us plan better interventions. Improving governance, accountability, and fiscal discipline could enhance efficiencies and curtail wasteful expenditure, releasing resources  for more community-based primary health care interventions that can yield better dividends. 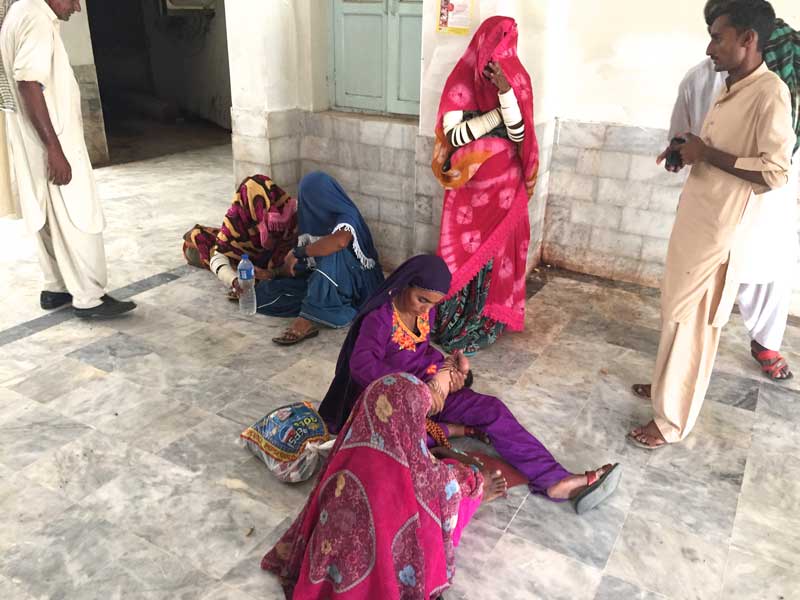 Patients sit on the lobby floor while waiting to see a doctor in Civil Hospital Mithi, Tharparkar.

A major preventive and cost effective measure that can immediately turn around our infant and maternal health indicators is family planning. It can help lower the number of unwanted pregnancies and thus pregnancy-related deaths and prevent preterm births and low birth weight, which are the major cause of neonatal mortality. Voluntary fertility reduction can mitigate the need for continually expanding infrastructure and accrue savings at both individual and national levels.

According to a UN report, “If all women who want to avoid a pregnancy used modern contraceptives and all pregnant women and newborns received care at the standards recommended by the WHO, the benefits would be dramatic. There would be a reduction in: unintended pregnancies by 70 per cent; abortions by 67 per cent; maternal deaths by 67 per cent; newborn deaths by 77 per cent. The return on investment would be an estimated $120 for every $1 spent on family planning.” To reduce our fertility rate from 3.6 to 2 or less, bringing it to the level of other countries in the region,  we cannot rely solely on services of the limited number of outlets of the Population Welfare Department. Among Pakistani women of reproductive age, currently a fifth would like to adopt family planning services, but are unable to do so due to limited access, and only 34 per cent are using any contraceptives compared to around 60 per cent in Bangladesh and above 70 per cent in Iran. Structural reforms are needed to enable the entire health infrastructure to actively engage in providing family planning.

The government must also strive to reduce inequities and inequalities in the health care system, across provinces and regions, within provinces, and between urban and rural areas. Specific interventions targeted at the poor and marginalised must be introduced to lower out-of-pocket expenditures. National Health accounts for 2016 show that households pay for 57 per cent of all health expenditures. Curative services can be subsidised for the poor within both public and private hospitals, through improved taxation, transparent use of Zakat and Bait-ul-Mal funds, and payment mechanisms that are responsive to the ability to pay, as at the Shaukat Khanum Memorial Trust Hospital. It is encouraging that the new government plans to continue the Benazir Income Support Programme (BISP) and expand the ‘Sehat Insaf Card,’ but more institutionalised mechanisms are needed that can be sustained in the long term, including measures to help the poor graduate out of poverty.

Tackling the above three areas will put the PTI in the right direction of reforms to deliver results on its important and ambitious health agenda. n

Dr Ali M Mir is a public health specialist serving as an Associate with the Population Council.