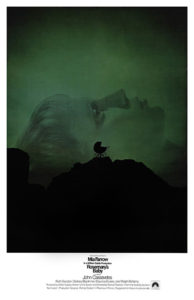 Roman Polanski’s Rosemary’s Baby (1968) opens with the humming of a lullaby by Rosemary Woodhouse, the film’s protagonist (played by Mia Farrow). It is a perfect introduction to her vulnerability. She sounds spellbound and in denial, having perhaps blocked out a reality that proved too sinister to bear. In trademark Polanski fashion, the opening sequence aptly sets the tone for what is to come.

Guy and Rosemary are a glamorous young couple who have moved into a new apartment, where the latter learns that she is expecting. Guy is an up-and-coming Hollywood actor looking for his big break. Yet all is not well in paradise. There are signs from the very beginning of a darker underbelly – to their relationship and their new home. Rosemary notices the eerie and eccentric nature of some of the residents of the building. She hears strange stories. Prior to finding out she is pregnant, she has a vivid nightmare in which she is subjected to a strange, robed ritual that culminates in her being raped by a beast resembling her husband.

Their neighbours, the Castavets – Roman (Sidney Blackmer) and Minnie (Ruth Gordon) – are a nosy elderly couple who grow overly friendly and increasingly controlling of Rosemary during the course of her pregnancy. It becomes increasingly apparent to her that they are no ordinary old-timers. Roman, she notes, has pierced ears and, according to her friend Hutch (Maurice Evans), “piercing eyes.” The ever-inquisitive and raspy-voiced Minnie, meanwhile, concocts herbal remedies that lead Rosemary to fall severely ill. It is then, based on some research done by Hutch, whom Rosemary takes into her confidence, that she begins to suspect a wider conspiracy, of which her husband is a part.

She learns of an old book titled All of Them Witches – about satanic cults and covens across the globe, one of which was apparently based out of the building in which she lives. It was, according to the book, run by Roman’s father in the 19th century. Rosemary has reason to believe that this coven still exists and currently comprises of most of the residents of the building – as well as outsiders, including one doctor. To her horror, she suspects that they want to sacrifice her baby in a satanic ritual.

The persecuted protagonist and the audience are, like in other Polanski films, made to suspect a plot that seems, at first, too outrageous to be true. Moments where certain characters dismiss Rosemary’s suspicions as absurd, provide the viewer with a fleeting sense of relief and succour, only to be overturned by confirmation of their complicity in the conspiracy. When Rosemary ventures out of her building in an attempt to reach out to a comparatively saner and benevolent ‘outside’ world for salvation, she receives reassurances. Deep down, we too hope that it is merely a case of paranoia getting the better of her. But alas, this proves a tad optimistic and her worst suspicions are confirmed, along with ours.

Rosemary soon finds herself in a claustrophobic environment that is closing in around her like a noose. It is a world starkly similar to the one Telkovsky (played by Roman Polanski) finds himself in, in the director’s later masterpiece, The Tenant (1976). The two films are distant cousins.