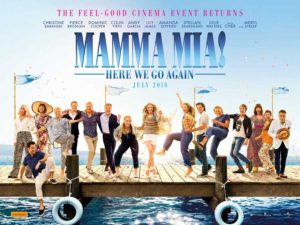 Ten years after the commercial success of the light-hearted musical romantic comedy Mamma Mia (2008), comes the sequel, Mamma Mia! Here We Go Again. Working on the same formula, the producers have come up with yet another delightfully silly chick-flick folks would love to de-stress with. In fact, the sequel is  even better.

Here We Go Again transports the viewer back to the fictional Kalokairi – a picturesque Greek island surrounded by inviting deep blue Aegean waters. The sequel picks up a few years after Sophie (Amanda Seyfried) had sailed away with her fiancé, Sky (Dominic Cooper), to see the world leaving behind her mother, Donna Sheridan (Meryl Streep), who was blissfully wedded to Sam Carmichael (Pierce Brosnan) – one of Sophie’s three possible fathers and the love of her mother’s life.

Donna has passed away in Here We Go Again, and Sophie has returned to the island of her birth to fulfil her mother’s dream and succeeded in converting her mother’s small inn into the Hotel Bella Donna, with Sam’s help. While preparing for the hotel’s grand re-opening, a call from Sky leaves Sophie anxious. They argue for the umpteenth time about whether to live on or leave Kalokairi, especially now that Sky has been offered a full-time job while still studying for a hotel management course in New York.

Mercifully, Sophie is distracted by the arrival of Donna’s two best friends from the first Mamma Mia – the wealthy, three time-divorcee Tanya (Christine Baranski) and the fun-loving author Rosie (Julie Walters), who provide company and support. But Sophie is disappointed that her other “two fathers,” Harry (Colin Firth) and Bill (Stellan Skarsgård), are unable to attend because of prior business commitments. Sophie’s plans further unravel after Fernando (Andy García), the mysterious Mexican manager of the Hotel Bella Donna, uncannily predicts an unprecedented storm that strikes the island and completely destroys the arrangements for the grand opening.

The film takes us back to another such storm in 1979, when Sophie’s mom first arrived on the island. Here We Go Again also doubles as a prequel, taking us back to the days of a young Donna (played by Lily James), when she graduated from university as the class valedictorian. Instead of giving a speech, she belts out the first classic ABBA song out of the 12 in the soundtrack, ‘When I kissed the teacher.’

However, Donna, who has had issues with her indifferent mother, decides to travel across Europe instead of returning home. Here We Go Again alludes to the mystery of Sophie’s three possible fathers. Harry, a British businessman she met in Paris; Bill, a Swedish sailor and travel writer she bumped into after missing her boat to Kalokairi, and eventually Sam whom she ran into on the island, while exploring a farmhouse during a sudden storm.

After a whirlwind romance, Donna and Sam break up when she finds a picture of Sam’s fiancée. Sam leaves a broken-hearted Donna behind on the island. She discovers she is pregnant. Clueless about which of the three men is the father, she decides to make Kalokairi a home for herself and her child. Coming back to the present, like her mother, Sophie also discovers she’s pregnant but is uncertain of Sky’s future plans. The writer/director, Ol Parks, frequently reverts to flashbacks, drawing parallels between Donna and Sophie’s lives, unfolding their stories simultaneously.

Apart from featuring the original ensemble cast, the biggest and most pleasantly bizarre surprise was the entry of American pop icon, Cher – and to know why, you will have to watch the movie. Interestingly, Benny Andersson and Björn Ulvaeus, the two male musician/composer/singers from the group ABBA, are the executive co-producers of the film. All the ABBA songs in Here We Go Again are beautifully placed in sync with the flow of the storyline. They still feel timeless, and with record sales of between 140 to 500 million albums, the Swedish pop group still ranks among the best selling music artists of all time.