Behind the bazaar and billboards of Ratodero lie dark, winding alleys. Larkana district’s second-largest town of over 67,000 residents is a dense maze of unfulfilled promises. At its heart – in the Harijan Colony, home to approximately 800 Dalits, or ‘Untouchables’ – Ratodero hides those whom it refuses to acknowledge.

Daulat Balbir is almost invisible. He lives in a 24-square-foot quarter on ‘Central Lane’ (Vicheen Ghitti) – a two-foot wide alley. An open gutter occupies half its width. It is his aisle to the outside world. Society keeps him at a distance – a truth that has left its mark on his face. He sweeps the streets of the city and is considered unclean and an embarrassment to be seen with. For this reason, he faces social exclusion and isolation, like all members of the Harijan community. Nobody will eat anything from their hands and few invite them to wedding functions, let alone attend any of theirs.

The educated youth of Daulat’s neighbourhood cannot find employment because they belong to the ‘bhangi’ or sweeper class and are therefore deemed repulsive. Even the police hesitate to come near members of their community, or imprison them, lest the other inmates feel uncomfortable being in the same cell as a Harijan.

The Harijans have lived in the old city quarter ever since it was built – in 1938. The colony of 100 houses, organised in 16 blocks, or quarters, has seen little municipal construction or improvement since. The Harijans are among the oldest inhabitants of the city. “We have always lived here,” says Gian Chand, a resident of the colony and a sanitation officer in the Ratodero municipal administration. “Even Pakistan came later.” Gian is one of 40 members of his community who are currently employed by the municipality, and the only one who has risen above the ranks of a sweeper.

“Up until a decade ago, 200 members of the Harijan community were employed by the municipality as sweepers and around 70 of them were women,” says Mukhi Ashok Kumar, President of the Hindu Panchayat of Ratodero. “Over the last 10 years they have been reduced to 40, of which only six are females.” According to Ashok, the administration now resorts to favouritism and hires sweepers on sifarish. It currently has 472 cleaners in its employ, but most of them do not even turn up to work and are receiving a salary sitting at home, he says.

The result is a decline in the town’s sanitation. Ashok cites as an example, the conditions that prevail on the premises of Ratodero’s water supply, the tree-lined grounds of which have long served as a public park of sorts. “People defecate in the park and no one cleans up,” he says. “The park is in a bad way.” He adds that in the past around six Harijan sweepers had been employed for the upkeep of the park and that it used to be clean in those days. He finds it strange that it is the Dalits who are viewed with downcast eyes, while the supposedly respectable citizens of the city defecate in the park, despite the fact that a new toilet has been installed there, and then don’t even bother to wash up properly afterwards, using stones to clean themselves. “People in our society need to change their habits,” he says. 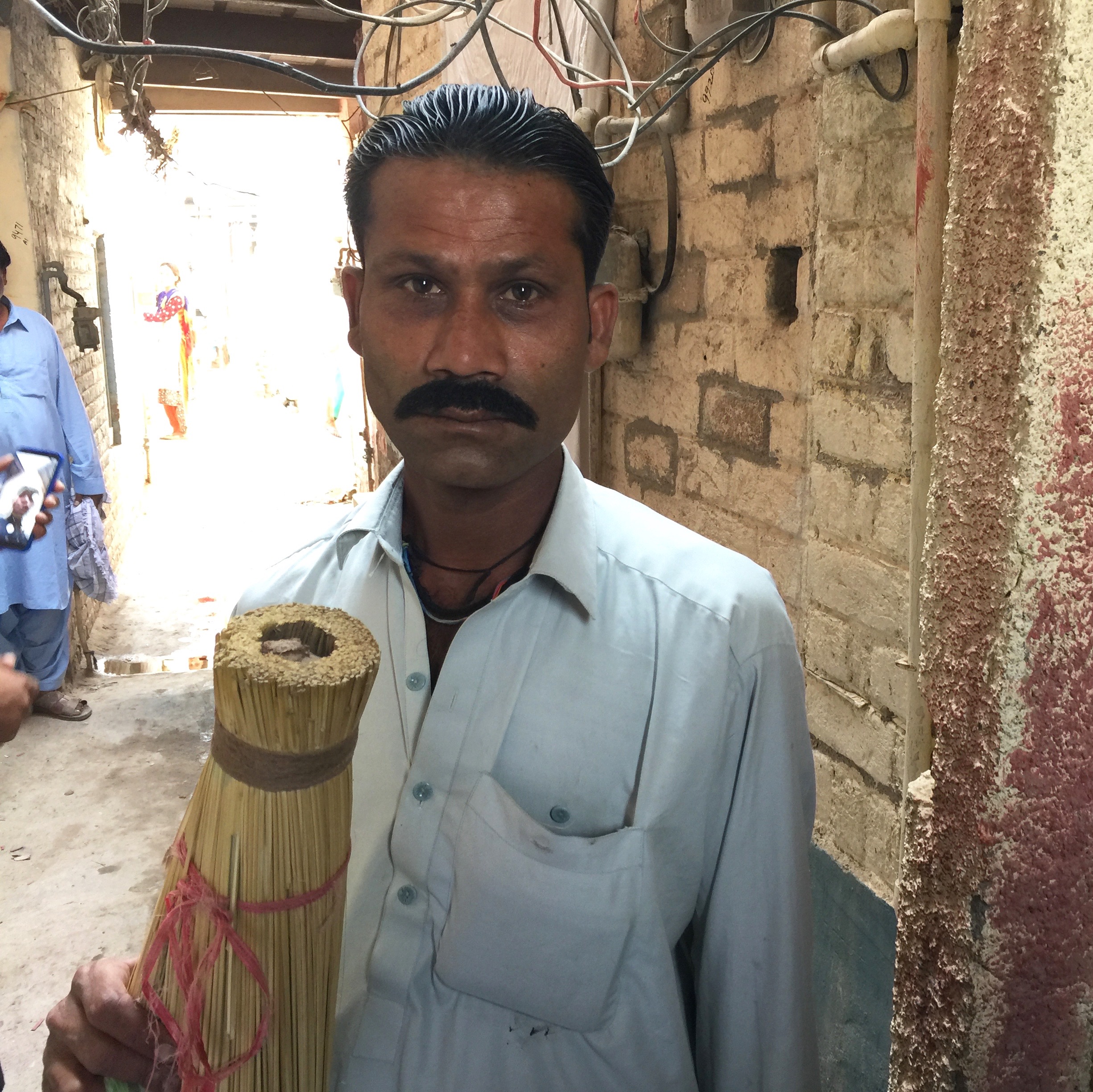 Nanik Ram works as a sweeper in Ratodero.

Sidelined, the Harijans have few avenues for employment other than  to work as cleaners. They cannot run roadside food stalls since no one is willing to eat anything they have touched. “The discrimination isn’t on religious grounds, but purely class-based and a lot of it comes from within the Hindu community as well,” says Ashok. There are some who have turned to small-time entrepreneurial ventures such as fixing mobile phones and motorcycles on an ad-hoc basis.

Ratan Lal and his wife live in one of the tiny, windowless quarters of the colony. Dressed in a white safari shirt and trousers and with his hair slicked back, he looks like a retired denizen of Florida. Ratan is a relic of a different era. He received a diploma in hotel management from an institution in Clifton, Karachi and briefly worked at the Taj Mahal Hotel (now the Regent Plaza) until a car accident sealed his fate. He now lives in his humble abode in a state of fear and suffocation. “Our daughters and sons are educated, but the only jobs they can find are as sweepers,” he says. With great difficulty, his daughter has managed to find work as a kindergarten teacher and his son as an art teacher.

Like every other resident of the colony, Ratan pays a monthly rent of Rs 1,200 for a dilapidated room built in 1938. Some rooms house up to eight people. Driven by desperation and a lack of alternatives, many families have expanded their quarters onto the lanes, making the colony’s public thoroughfares unusually narrow and difficult for residents to walk through.

“Local councillors and political representatives promised to give us plots and jobs, but we never heard from them again,” says Ratan. The only semblance of help came in the form of an attempt by the administration to rebuild the local mandir of the Hindu goddess Devi Mata, but even that has not been completed, he laments. “Rs 10 million were allocated by the government for the construction of the new mandir, but only approximately Rs 1.2 million were spent,” he says. “The upstairs section has not been built and the shrine lacks electrical wiring.”

Of the Hindu community of Ratodero, it is only the Harijans who prefer to bury their dead instead of cremating them, while some request that their bodies be deposited in the River Indus.

Owing to their status as outcasts, inter-marriages are common within the community, between cousins living in Larkana, Sukkur and Karachi. As far as Ashok can recall, there have been no cases in Ratodero of forced marriages, kidnappings or forced conversions of Harijan girls – mainly because of the stigma that surrounds them as the sweeper class that cleans up other people’s filth. “There is the rare occasion in which a Muslim male sees a girl sweeper on the street or working in his home and ends up marrying her,” he says, “but these are consensual affairs and not forced.” He points out that it is not solely due to their profession as cleaners that Harijans are viewed with repulsion. “There are Christian sweepers too,” he says. “But, there is not as much class discrimination against them, possibly because they are better educated and make more of an effort with personal hygiene,” he says.

Similarly, the Harijans are not the only ones who are treated like they do not exist. The colony overlooks an empty plot where leaders like Benazir Bhutto and Nawaz Sharif have staged public meetings in an attempt to rally support. In one corner of the space is a collection of makeshift shanties and tents. They are home to a squatter settlement of Bheels, Bhattis and the Brohis of Kalat.

Mithi Bhatti lives alone and begs in the streets at night.

Aalam Khatoun and her sister, Khadija – Brohis by caste – make the long journey from Kalat to Ratodero every winter with their husbands and army of children, to escape the cold. Skilled artisans, they make and sell axes, knives, sickles and shovels. As homeless wanderers, they are in a constant state of flux, setting up camp wherever convenient. A few days earlier, they were living in another plot and were made to vacate. Khadija carries her medical reports on her at all times and shows them to whomever she meets. She has a problem with her lungs, but cannot afford treatment.

The Brohis’ neighbours, for now, are Bhattis, who reside in a cluster of 25 tents. Haleema Bhatti and her husband Rasool Bux have lived in Ratodero for 50 years and have been homeless for most of the period. Haleema begs for a living while Rasool Bux collects and sells cardboards from garbage dumps. Their 10 grandchildren play amid piles of polythene and scavenge along the banks of open gutters, hands and mouths blackened with dirt. “I went to a government hospital for treatment, but the doctor told me not to come back again,” says Hazoor Bux, one of the elders of the family. “It is only a matter of time before the police remove us from here.”

In the midst of poverty and hopelessness, stands the solitary shelter of Mithi Bhatti, an elderly, childless widow who lives on her own and fends for herself. She survives by begging in the town at night. This mélange of squatters of different castes and creeds are united by a common cause: they are in desperate need of a plot of land, or space that they can call home.