ells stories like Scheherezade would. There’s no beginning; no end; there isn’t even a coherent ordering of sequences. But at age 86, Cowasjee still has a distinct flair for drama. Everything in his space and everyone he knows — and he knows almost everyone — has a story and his narration makes even the prosaic utterly compelling. But even more remarkable for someone who’s seen and done it all, Cowasjee is still curious about life, people and their stories.

“Who has died?” he asks querulously, while I’m still walking towards him. The gambit is deliberate, designed to throw me off balance so he can take me to task for my “solemn expression” and demand a kiss. I’ve seen him pull this one before. “Nobody; I’m wearing red lipstick, see?” I retort. Unfazed by my churlishness, Cowasjee completes the set as he’d originally envisioned: “I like kissing pretty girls.” Pleasantries and kisses over, I settle down for my interview. Once my educational qualifications and antecedents have been established (he remembers my father was a friend, mimics his mumble perfectly but forgets he’s been dead three years) and my financial relationship with Newsline discussed thoroughly, Cowasjee proceeds to scold me for not having met the editor. I proffer paths-haven’t-crossed but he’s made up his mind: “You mean she’s too busy to have lunch with you.”

Fairness demands I defend my absent editor but I’m suffering from acute sensory overload. The conservatory we’re sitting in opens to a garden that belongs in the tropics — verdant grass, crimson flowers, venerable trees. The January sunshine burnishes the teak armoire desk, glazes the black Persian cat, napping on an armchair before settling in puddles on the hardwood floor. But the brightest star in this space is the diminutive, pale-skinned, silver-topped figure in scarlet tracks, a multi-hued silk scarf and a rakishly set, electric blue velvet beret. The colours alone would give anyone pause except this is a loud, opinionated household.

Once Cowasjee’s assistant fits him with his hearing aids (he wears two), he yells for the cook Hasham Khan and upbraids him for not wearing his waistcoat. The two argue the sartorial merits of Khan’s attire for several minutes before the latter is dispatched with precise instructions regarding coffee (volume, cafetiÃ¨re, breakfast cups). By the time the coffee arrives in fine bone china, I’ve heard Hasham Khan’s life story, the story of the business rivalry between some long-dead Dinshaws and Cowasjees and witnessed a heated argument between Cowasjee and his longtime colleague and friend Amina Jilani, about the state of the former’s eyesight (both cite the same doctor and conflicting conclusions). Even the animals in Cowasjee’s menagerie have definite opinions: one of the dogs is scratching messages in Braille on my arm and Sir Benjamin Franklin, the lemon-yellow crested cockatoo, seems to have taken a fancy to my toes. (“He loves eating chappals,” offers Jilani).

The clothes and the setting would be considered theatrical if it weren’t for the man inhabiting them. In his 22 years as a columnist for Dawn, Cowasjee was renowned for his loud statements. And, what’s more, for having the courage to defend his views spiritedly, in public, with colourful epithets and language. Before the media explosion in Pakistan, before everyone became a blogger and an op-ed writer, Cowasjee was the go-to man for every activist, anyone who cared enough about an issue to want it publicised. And Cowasjee was among the very few who weren’t scared to name names.

When Karachi cowered before the seemingly omnipotent builders’ mafia, Cowasjee was the only one brave (or foolhardy) enough to denounce them.

When legal wizard Sharifuddin Pirzada was at his Machiavellian zenith and scores trembled at his mention, Cowasjee mocked him in print and dubbed him ‘Jadugar of Jeddah’ (“The saala likes the title”). 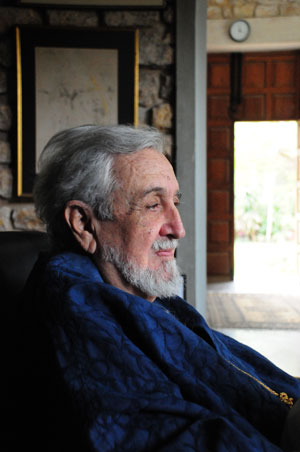 When the tide turned against then dictator Pervez Musharraf, Cowasjee remained his sole champion (“He’s a good man… All of us have our faults and follies”). At a time the nation was getting swept away by the activism of the current Supreme Court, Cowasjee was holding out and screaming judicial overreach. And he’s still calling President Asif Zardari a “chor” and accusing architect Aqeel Bilgrami of having constructed the bunkers under Bilawal House. (“He used to run away from me at parties because he was scared I’d write about his involvement,” chortles Cowasjee).

But even a month after the publication of his last column, Cowasjee won’t be lured into a those-were-the-days type of self-glorification exercise many writers secretly revel in. “My grandfather used to say that if anybody comes through your door, you have to hear them out and that’s all I’ve done really… I’m an ordinary man; what have I done apart from writing? That too, began as a joke — I used to write letters to the editor. And I wouldn’t have been able to even write for all these years without Amina. She used to fix my Parsi-school English… We’ve worked together for 40 years…” (He pauses to cross-check the number with Jilani. “Amina, it’s been what, 40 years?” “I don’t know; it was so long ago,” comes the reply. “She does this deliberately to aggravate me… She likes to come across as stern but she isn’t,” he confides in a stage whisper). “I’m here today because of the work of my great grandfather. We had 12 ships at one time and then [Zulfikar Ali] Bhutto nationalised everything… The liquidation of the family empire was my business but I’ve been blessed. I’ve known no want.”

It’s perhaps this contentment that keeps Cowasjee grounded. He doesn’t see himself as democracy’s love child and he shies away from truth-to-power, symbol-of-resistance type of references. He offers no penetrating political insights and doesn’t claim to have been the messiah for the dispossessed (despite the fact that the Cowasjee Foundation funds multiple health and education projects). All he’ll admit to is having invited his readers to have a sense of humour about themselves and their lives. “But these Musalmaans have no sense of humour…”

This irrepressible sense of fun shows up in most of Cowasjee’s stories. When Bhutto’s star shone brightest, Cowasjee was sent to jail for 72 days. People speculated about a Nusrat Bhutto connection but nobody knew why exactly (“I must have said something about him”). But Cowasjee’s version focuses less on the excesses of the Bhutto regime and more on the timbre in the former prime minister’s voice. “When he released me, he kept telling my father in his squeaky voice, ‘Do you know what he’s done? You don’t know what your son’s done’,” chuckles Cowasjee. “He told us he’d tell us the reason when the time was right. But his time ran out before the ‘right time’ could come…”

When the family’s shipping business was nationalised, Cowasjee was offered just one million rupees as compensation. He approached the Supreme Court but the case kept getting deferred. In a last-ditch attempt to get things moving, Cowasjee asked his old friend Sharifuddin Pirzada to intervene; he wanted a large sum of money as his ‘fee’ for ensuring the case came up for hearing. Tellingly, Cowasjee focuses less on the demand and more on how it was couched. He always spoke in whispers, kept repeating “Kissi ko pata na chale.”

What of his own sins, I prod. “I love women. I like kissing them; I liked sleeping with them but I’ve never raped anyone.” It’s a characteristically Cowasjee statement: raw, baldly couched, without even a shred of apology but it is what it is. “I had an extremely happy marriage till my wife died in 1992 — she knew about my affairs but she stayed with me out of love and affection. She’d say I was naughty and that I’d miss her when she was gone and — God bless her — she was right.”

So what now? “While Amina is around, I’m doing things,” he says, citing the recent Jinnah Society award as an example. “She accepted the award on my behalf without even asking and then insisted I wear a suit to go receive the brass medal… My daughter Ava comes around; I have friends… I’ve led a full life.”

As I turn to leave (after he’s mocked my parting statement for not having the appropriate amounts of postcolonial servility), Cowasjee rises to show me a framed photo of Picasso with a hole cut above the ear for a fresh flower to be inserted every other day. “Picasso wore flowers behind his ear,” he tells me.

It’s an appropriate tribute by a man who’s lived his life on similar terms.

This profile was originally published in the February 2012 issue of Newsline under the headline “The Irrepressible Mr Cowasjee.”