Hats and eye-patches, doorways and windows, hearts and guns: these are the lingering images from the art show Three In a Crowd held at Art Chowk Gallery in Karachi. The three-person show, which also made its rounds in Islamabad and Kathmandu, Nepal, features works by printmakers Atif Khan, Sophiya Khawaja and Zaira Ahmad.

Out of the three, Zaira Ahmad’s work is more traditional in style and the prints from her “Brick By Brick” series employ rust and copper tones that, combined with the architectural images, suggest decay and abandonment. There are no figures in the spaces she depicts and, in fact, there is no suggestion of life at all, which emphasises the themes of loss and isolation. Her prints recreate the experience of visiting an old, abandoned building and admiring the history that is contained within the bricks and mortar. 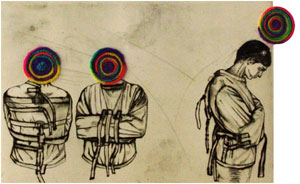 In contrast to the quiet, contemplative quality of Ahmad’s work, Sophia Khawaja’s work is bold and satirical. She employs the chine colle technique in her prints, which feature female figures wearing blindfolds or trying to use megaphones while gagged. Crescents and tiny green and white flags also make an appearance, and Khawaja’s work evokes concerns regarding censorship and freedom. The figures are rendered in drypoint, a medium that allows for speedy drawings and the gestural lines create a sense of action against the placid, ombrÃ© backgrounds. She also utilises mediums not conventionally associated with printmaking. In ‘When Happiness Is Only For the Crazed,’ there are three figures in straitjackets and brightly coloured spirals of wool are pasted on or over their heads. Khawaja’s prints are politically charged and the gallows humour found in her work is clearly in response to the various political and social problems of the country. 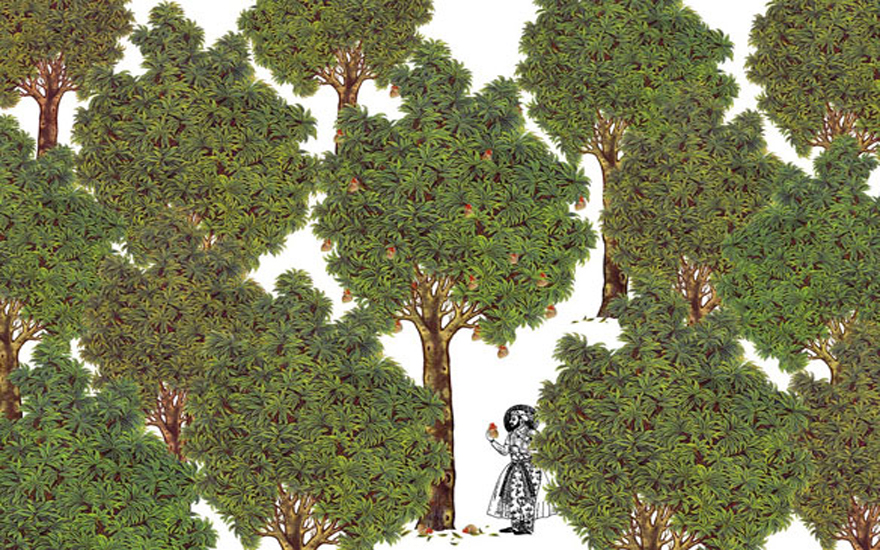 In Atif Khan’s digital prints, too, there is a sense of humour, although in a more understated, sardonic style. In one, a Mughal king is perched atop a pile of enormous , anatomically correct hearts, whereas in another a similar figure is shooting strangely patterned birds. Atif Khan makes use of the same flattened style often seen in traditional miniature paintings and the daintily rendered trees and birds are a counterpoint to the unconventional landscapes found in his work. The Mughal figures, shown in black and white, appear dispassionate and rather than creating a sense of nostalgia, Khan’s work suggests that these past kings and rulers have been glorified unnecessarily.

While the common thread between the three artists is that they are printmakers, it is worth noting that in terms of style and content, Atif Khan and Sophiya Khawaja’s work complement each other, while Zaira Ahmad’s relatively understated pieces seemed a little out of place.

This article was originally published in the February 2012 issue of Newsline under the headline “In Fine Print.”