It was a classic retreat from the precipice. Conscious of their respective limitations, the titans decided to de-escalate the conflict before it developed into a full-scale war, first by appearing together in public, and then by amending earlier statements, stating ambiguity as the primary driver of the aggressive posturing. The centre of gravity, the Supreme Court, clearly climbed down from the pulpit, and on January 30, allowed two more months for the controversial Memogate investigation and lifted the travel ban on the man in the eye of the storm, Husain Haqqani, Pakistan’s former ambassador to Washington.

Was it, after all, just a storm in a tea-cup, hyped up by the security apparatus, as well as Mansoor Ijaz, the Pakistani-American businessmen who acted as the whistleblower on an incident that many found hard to believe. Did the refusal by Research in Motion (RIM), the Blackberry company, to share data with Pakistan’s judiciary, eventually consign the case to the dustbin of history?

The Memogate fever that gripped the entire nation, who agonised over it for a considerable length of time, caused unnecessary loss of time and resources. This distasteful episode has clearly left a trail of unpleasant brinkmanship, slander, and speculation. But viewed from a distance, it has also exposed some stark realities. For the first time in the country’s history, the apex court has emerged as a very strong and largely unified power structure, second only to the mighty military establishment which had, until Justice Iftikhar Chaudhry’s revolt against General Pervez Musharraf on March 9, 2007, acted as the unquestionable wielder-cum-arbiter of political power. Ideally, the parliament should stand out as the ultimate centre of power but given its shortcomings — precipitated by the absence or lack of integrity at the political helm — the pendulum has clearly swung towards the apex court, turning it into a centre of gravity which the military and politicians like Imran Khan and Nawaz Sharif look up to.

The Zardari-led government, too, is gasping for breath as it faces the wrath of the enigmatic Supreme Court. Yet, the court cannot dislodge the government, and if it were to ever invoke Article 190 to seek the army’s support for its rulings against the rulers, it will have to justify its stated opposition to the army’s intervention and involvement in politics. In the face of a defiant Zardari-Gilani government, the superior courts’ judges know that they can only influence politics to a certain extent — they can interpret the law but they cannot have the law, or their orders, implemented. 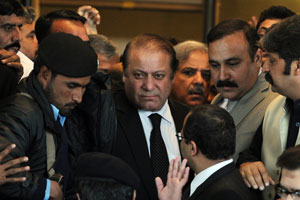 Nawaz Sharif and the military were depending on each other for their success vis-a-vis the current government in the Supreme Court. But thet both realised that they lacked the requisite authority. The Supreme Court was depending on Mansoor Ijaz’s testimony, but he decided to stay away from Pakistan. It turned out that all stake-holders were hamstrung by their own limitations.

As a whole, Memogate and the NRO cases marked the height of the triangular battle between the PPP, the Supreme Court and the GHQ. Technically, they are still at loggerheads until the final disposal of these cases. Practically, operational constraints in an unfavourable environment prohibit them from continuing on a collision course. Nobody wants to rock the boat.

Should this be viewed as a probable win-win situation for the troika, or as a loss of face for the military, becausethe army and ISI chiefs had practically sworn that Memogate was “a reality” and a conspiracy against national security? Whoever put Kayani and Pasha on this path certainly did a huge disservice if Memogate were to become history.

What does this mean for the larger political landscape, particularly when the talk of holding early elections is growing louder? How will the political scenario unfold in a situation where the judiciary is hamstrung by lack of power vis-a-vis the executive, the army is on the defensive, the Awami National Party is happy in Khyber Pakhtunkhwa, the PML-N is happy in the Punjab, the JUI-F is, practically speaking, still enjoying the privileges of power (despite being out of government), the MQM is sitting pretty (like the proverbial fish-bone for rulers both in Islamabad and Karachi), and lastly the PPP, firmly ensconced in the saddle in Islamabad, is now increasingly expanding the Benazir Income Support Programme (BISP) to the reported exclusion of other political parties — a ploy to ensure votes in the next elections.

Let us start with Imran Khan’s tsunami. It has probably already peaked but remains wobbly because of some questionable statements and actions by Mr Khan, who has shocked many by suggesting an election alliance with the conservative Jamaat-e-Islami (JI). Many within his ranks would not like it, especially keeping in mind the recent pronouncement of Maulana Munawar Hassan who told JI followers that “only beards and hijabs” would usher in a revolution in the country. Following the influx of former Musharraf colleagues into PTI, many are certainly disappointed with the party and questioning whether these figures will attract the popular vote across the country.

What is clear though is that the explosive events of recent weeks did manage to pave the way, at least for an inter-party discussion on early elections, and hence Premier Gilani’s statement after his return from Davos, where he sounded open to the possibility of early elections after the budget. 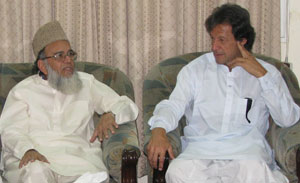 The news from the grapevine is that the PPP’s Khursheed Shah has been tasked to open dialogue with other parties to discuss a mechanism for early elections, as well as a caretaker administration. A central PML-N leader told Newsline that resignations from assemblies before the Senate elections still remained an option. He ruled out any talks on preserving the current system, yet suggested that if a dialogue took place with the PPP, the PML-N’s sole objective would be to demand early elections as soon as possible.

Another issue bothering the PML-N is the massive use of funds from the Benazir Income Support Programme (BISP), which they say the PPP is using lavishly for women and youth. The N-League suggests an immediate stop to this distribution of money, calling it an out-and-out ploy by the People’s Party to win new voters.

Surprisingly, it seems that both the United Kingdom and the USA, as well as the World Bank, view grants under the BISP as stabilisation tools and have thus provided several hundred million dollars for distribution — DFID recently gave US $180 million and the World Bank an additional US $ 50 million.

Does this mean that countries such as the UK, and the US, and certain international finance institutions (IFIs) are likely to support the present coalition in the new elections and want them to return?

All coalition partners — the PPP, the ANP, the MQM and the PML-Q — know that they can only succeed by staying together, particularly in view of the possibility of Imran Khan’s PTI chipping away at the vote bank of the Jamaat-e- Islami, the PML-N and the PML-Q. Imran Khan’s gain will be the Leagues’ loss but a gain for the PPP as a whole. Will this mean another comfortable ride into power for the PPP? To what extent will Asif Ali Zardari and company out-manoeuvre Nawaz Sharif and the others? So far, the PPP has moved skilfully, outdone the others and survived.

This article was originally published in the February 2012 issue of Newsline as the cover story under the headline “Retreat from the Precipice.”