He did not come, he did not see, and he certainly did not conquer. But Mansoor Ijaz, a US businessman of Pakistani origin, nearly brought down the government in Islamabad.

The murky affair billed as Memogate is as good as dead and buried. The investigation by the judicial commission will drag on till the end of March, and the relevant people will go through the motions, but the sting is out of the scandal. Nearly all stakeholders have stepped back and do not appear interested in pursuing the matter any more.

The trail seems to have gone cold.

As the dust begins to settle, it becomes clear that the scandal has produced two casualties: Husain Haqqani, and the truth. In time, Haqqani may recoup the damage done to him, but the truth may not be known for a long time. But what is known is that the country has been taken for a ride.

All those involved may now heave a collective sigh of relief, but this glosses over the fact that almost every stakeholder comes out smelling bad. In fact, the least to be affected — in an ironical way — may be Mansoor Ijaz. He didn’t really have much to lose. He never had any stakes in Pakistan, and neither did he have much credibility to start with. Known as a publicity-seeking self promoter, Ijaz had flirted around with almost every recent Pakistani government, peddling his supposed influence within the US power circles and presenting himself as a mediator, facilitator and promoter of various issues. No one in Pakistan had taken him too seriously before. In fact, perhaps the only people who ever took him seriously were the Fox News Channel news managers, who occasionally featured him as an expert on Pakistan.

So why did his word carry so much weight this time around? Perhaps he became an unwitting cog in a larger strategic game. Perhaps he triggered off a series of events which then spun out of control. Or maybe — just maybe — he was actually on to something, but didn’t have enough evidence to prove it. Whatever the case may be, what is clear is that he was not the sole player in this sordid saga. Messages were exchanged. Lines were written. Emails were sent. And thoughts were structured for a plan of action. The action was just never executed. 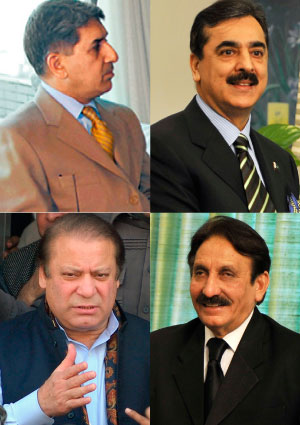 In other words, there was enough material flying around for the head of ISI to take it seriously. Were it not for his London trip to meet Ijaz, and were not it for his convincing arguments to the army chief, the Memogate scandal would have died a natural deathon the editorial pages of the Financial Times. From there, the issue gained new life as it got splashed in the local media. Suddenly detailed transcripts of email and BBM exchanges found reams of column space and hours of air time. A one-paragraph accusation transformed into a full-blown political scandal.

The rest, as they say, is history. Except that it’s not.

The army chief and the ISI head still have a lot to answer for. What convinced them to take this issue so seriously? What prompted them to get Husain Haqqani’s scalp and still relentlessly pursue the matter in court through their strongly-worded written statements? And what made them ultimately back away and not ensure Ijaz’s arrival in Pakistan? These questions may stop making headlines, but they still remain unanswered, and will keep hanging around for some time to come.

The government has a lot to answer. Why was it so afraid of a thorough enquiry into the matter? Why did it panic at the thought of Ijaz coming to Pakistan to record his statement in front of the judicial commission? Why did it keep insisting the memo was nothing more than a piece of paper when its content was specific, and required specific answers? The memo may recede into oblivion, but a nagging feeling still pollutes the air that the government knew more than it admitted to; that there was more to the affair than the government cared to admit. In short, the government was terrified of full disclosure.

Additionally, the judiciary has a lot to answer for. Why did it pounce on the matter despite the dubiousness that surrounded the issue? Why did it act in haste by banning Haqqani from travelling abroad, and by forming a commission? And why has it suddenly put the issue in veritable cold storage by giving the commission a two-month period to complete its work? The superior judiciary will be accused of indulging in judicial haste when perhaps judicial restraint may have been a better and more prudent option. The judicial commission will be blamed for its ineffectiveness and failure to fulfill its mandate to find the truth.

Nawaz Sharif will also have to answer several questions. Did he jump the gun by rushing into court with a bagful of petitions on the matter? Was he used? Is he now a victim of his own second-guessing? And has he also realized that the matter benefits no one if it drags on. His best defence would be that he judged wrongly. The best is clearly not good enough.

The media, too, needs to do some introspection. In its eagerness to go after the Big Story, did the media overplay the issue? Did the relentless coverage of Memogate inflate it beyond its actual significance and force the institutional power players to dig in their heels for fear of losing face? And should the media move on to the next story when Memogate has clearly not reached a logical conclusion?

The final verdict is still to be given. But chances are Mansoor Ijaz will not land in Pakistan any time soon. Expect a few more op-ed pieces from him in the coming weeks and months. Perhaps even a book. But words alone will never be enough to explain why Pakistani leaders were — and still are — so afraid of an unsigned piece of paper that no one owns up to.

This article was originally published in the February 2012 issue of Newsline under the headline “Adieu Memo, and Mansoor?”