Shireen Kamran is a Montreal-based Pakistani artist who migrated to Canada in 1996.

Of Totems and Minarets was her most recent solo exhibition at the Canvas Gallery in Karachi (January 10 — 19). It is a body of work that speaks volubly of the Sufi path and the experiences that inspire her canvases. Newsline spoke to the artist to learn more about her life and inspiration.

Sufi poetry and philosophy is a conspicuous part of your work. How did your spiritual quest begin and when did it inspire your work?

My journey was never sought, it came to me. In 2000 I was reading Laleh Bakhtiar’s Sufi: Expressions of the Mystic Quest which inspired several mental images, I realised they were similar to what I had on my canvases. It was as if I was putting the images of my work right next to the book; it all fell into place, and my journey began in the real sense. In 2000 I had my first exhibition at the Gallery McClure in Montreal, Quebec, which was entitled Un Mille Jour or 1000 days, symbolic of my three years in Canada — it takes 1095 days of living in Canada to obtain citizenship.

Works such as ‘The Mullah and the Moon,’ ‘Which Way Round is Right’ and ‘The Reed Flute Song’ are from your Sufi collection and speak of your mystical leanings. What is their message?

I have always wanted to learn more about the mystical dimensions of Sufism in Islam; Rumi’s masnavis and Anne Marie Schimmel are some of my favourite reading. These readings inspired little stories and verses in my mind, and the titles for my paintings would come to my head. Naming them was to give my painting direction and for people to follow me, especially since I was exhibiting for a western audience. ‘The Mullah and the Moon’ is now hanging at a prestigious French organisation in Quebec. Who would have thought that this is where the Mullah would end up? ‘The Reed Flute Song,’ also displayed for the public in Quebec, symbolises human yearning via the eternal sound of longing that comes from the flute as it cries to be reunited with the reeds. This is a universal human condition.

Your forms are figurative and abstract at the same time. Do you wish to classify them or let them float free on your landscapes?

My work is only landscapes: they are never figurative in the true sense. I am always inside my work; I go into my canvas in a bid for resolution, follow my hand, and once I’ve resolved my issues and had enough, I leave it. Every new image or form that comes to mind is also delineated on my canvas. Sometimes these images are animals, with human forms floating in-between, and since landscapes have to speak to you, this would be my comment on animal instincts. I juxtapose these images over and over again, and that’s when the final completed canvas emerges. Since I don’t work for a show at the last minute, my work is usually done ahead of time. I prefer to keep my canvases with me for a while and, somehow, all kinds of things happen when I revisit my canvas.

Your ‘Zikr’ and ‘Deedar’ series incorporate natural features of the Canadian landscape into works suffused with spirituality. Tell us more.

The ‘Zikr’ and ‘Deedar’ series are landscapes that are at times very abstract. They were inspired by my travels across Canada when images of beautiful landscapes stayed in my mind. There is a poignant feel to them, since I believe natural beauty is but a glimpse of the Divine. The knowledge that there is a power behind nature is an acknowledgement of the Divine. Zikr is to repeat the name of Allah — the constant blink of an eye is Zikr, to acknowledge God’s creation is Zikr. 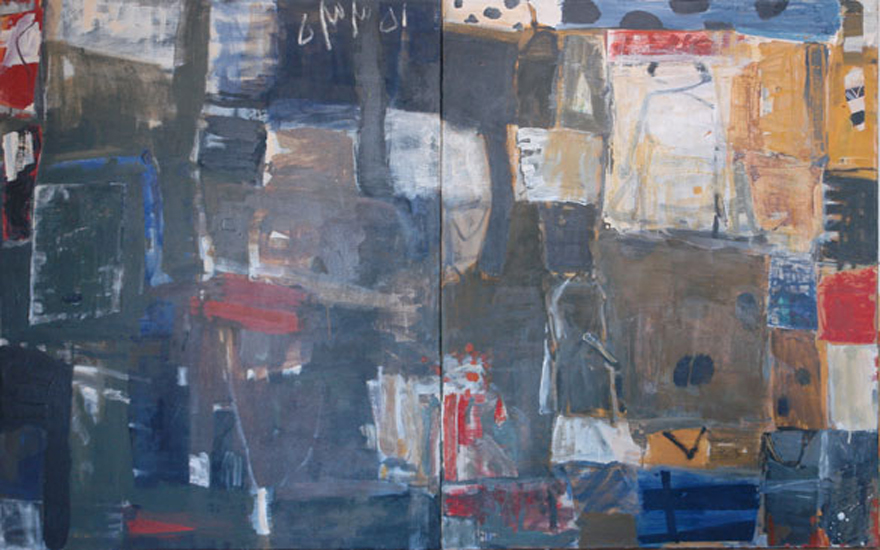 How did the immigrant experience inform your work?

The immigrant experience was a point of departure for me. In 1996 I moved to Canada and within a year, keeping in mind my belief that I never wanted to be an amateur artist, I joined Concordia University as an adult student in 1997. I realised it was a competitive environment out there — as an artist if one doesn’t exhibit one is not on the map. I didn’t want to be that generic immigrant in a dead-end, nine to five job, returning exhausted on the subway every day. My creative energy began from that point when I chose not to lose my identity in this immigrant conundrum. I’ve now been exhibiting professionally since 2000, and since I live in Quebec I try to add French titles to my work. I know that if I was not in Canada I would not be painting professionally. This change of continents inspired me to see life from a different perspective; there was deep soul-searching that inspired my work, and I attempted to rationalise why I was isolated from immediate family.

Why have you named this latest collection Of Totems and Minarets?

On a trip to Stanley Park in Vancouver, British Columbia, I was very inspired by the native art totems and how they were talking to the skies. They reminded me of mosque minarets, which is one of the first things I see in the urban landscape when I return to Pakistan. Somehow, the vertical upright forms were similar, though they were in different geographical locations, yet they tied up both locations for me.

Do you think the popularity of Sufism in Canada and the USA adds to the appeal of your work for those who seek a similar consciousness in North America?

I am not part of a mainstream Sufi discourse or any community Sufi group. Basically, I take what I can and what I am artistically inclined to do. I don’t want to be confined to a particular order. One of my first exhibitions, in 2003, was in a Zen show, L’Espirit Zen, at a Nun’s seminary, the Vieux Presbytere in Saint Bruno, Quebec. I’ve always been a thinker and have drawn on several experiences and philosophies. I use whimsical, witty stories to endear the viewer to my canvases. Since I don’t want to restrict my philosophy, I aim to evolve into a citizen of the world.

This interview was originally published in the February 2012 issue of Newsline.