What was it about the Shahbag movement in Bangladesh that inspired you to make the Na Honay Pai video?

The Shahbag movement represents a mass, spontaneous upsurge in Bangladesh against political parties like the Jamaat-e-Islami and, more specifically, their role in the massacres in 1971. It also represents a movement towards a secular society. For a Muslim country to achieve such a scale of mobilisation for secularism is quite unique in an age when the religious right is becoming more and more dominant not only in Pakistan, but even in the so-called Arab spring.

More importantly, the movement raises many uncomfortable questions about our state and our history. We are who we are today because of what happened in the past and we cannot disconnect from it or pretend that it is no longer relevant as it shapes who we are and what we are becoming. For instance, it seems very clear to me that there is a clear line of continuity between the massacres in 1971 and the massacres in Pakistan today. The same forces that we term “religious extremists” have become powerful as a consequence of decades of state support and have now turned on society in a brutal way. The very same policy of attempting to artificially and forcefully foist a singular and narrow concept of a Pakistani identity on a diverse and pluralistic population is resulting in the annihilation of all religious and national plurality.

It is my hope that, perhaps, some people will see the video and draw the connections between the past and present. If they do, they will also have understood why it is so important for us today to demand justice for what happened yesterday. 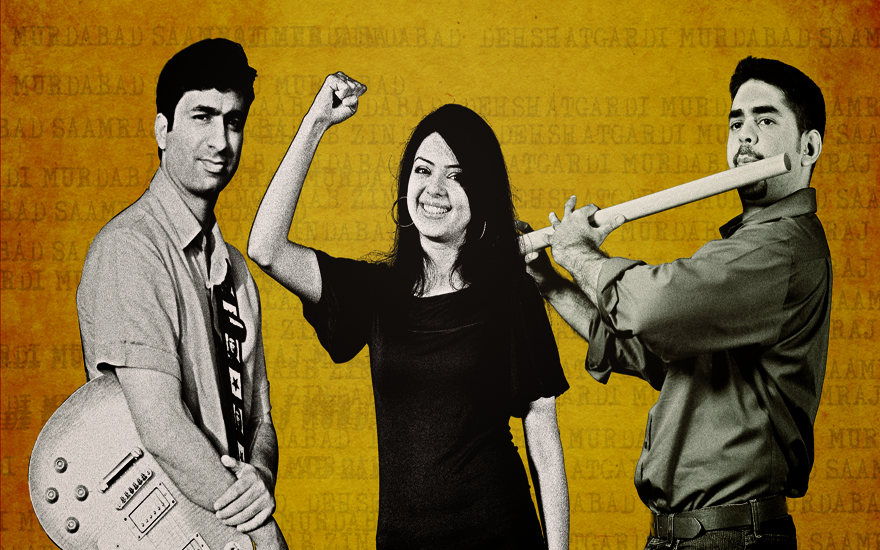 “Our greatest triumph is our tour of the Punjab which we had organised as a fight against extremism that took us to countless universities, colleges, schools and villages where mainstream commercial bands never perform. And the energy, love and determination that we saw among these young people has been truly inspiring.”

Can you see a similar movement ever taking place in Pakistan?

I believe that the forces that make up such a movement also exist in Pakistan. But certain conditions, such as the gross imbalance of power between reactionaries and progressives, prevent their public expression. With armed vigilantes having taken the lives of tens of thousands of people in the country it seems that we require a solution that is even more drastic than a peaceful mass protest. In other words, rooting out the armed religious extremist groups is a pre-requisite to the rise of such movements in Pakistan.

Are you in any way personally linked to the events of 1971?

I am the grandson of Chief Justice Sheikh Abdul Rahman, who was brought out of retirement to try Sheikh Mujibur Rahman in the Agartala Conspiracy Case. The case was never concluded but I did hear some Bengali nationalists comment that my grandfather was a very fair judge in that case. Naturally, this was all before my birth; nonetheless, I feel a grave sense of historical duty to raise my voice against the atrocities committed.

Given the success of Na Honay Pai, do you have any plans of touring Bangladesh?

The original plan was to shoot the video in Bangladesh. However, financial constraints and the need to get this video out into the public realm on time changed those plans. We were lucky that Calcutta-based activists, El To Somoy, volunteered to make the video.

Since its release, we have developed a substantial fan following in Bangladesh with some friends looking into the possibility of inviting Laal to their country. Nothing is finalised, but if it happens, it will be historic.

What do poets like Faiz and Habib Jalib represent for you? Are there any poets today that can match their legacy and political importance?

To me they are first and foremost Marxists. I think this part of their legacy is always forgotten or deliberately excluded in the mainstream media. If you notice, they are often depicted as humanist, liberal or awami poets. But the fact of the matter is that they did what they did because they wished for the establishment of a classless society. I think poets of the same calibre exist even today in Pakistan. However, it is rare to find thinkers that match their talent at a time when the worldwide project for socialism is only just recovering from the defeat of 1991.

Do you consider your music as primarily political? What political/social activities is Laal involved in?

Yes, our music is unapologetically political. For the last several years we have been campaigning against religious extremism. We have been writing songs, making music videos and talking to people on this issue. But I think our greatest triumph is our tour of the Punjab which we had organised as a fight against extremism that took us to countless universities, colleges, schools and villages where mainstream commercial bands never perform. And the energy, love and determination that we saw among these young people has been truly inspiring.

Recently, you performed in Jhang. The city is infamous these days for the Lashkar-e -Jhangvi, but it also has historical significance as the birthplace of Heer and the city where Abdus Salam grew up. What was the significance of performing there and how was the response?

As a matter of fact, we performed in the same college where Abdus Salam had studied (the Government Postgraduate Degree College). And after the performance, we revisited the shrine of Heer and Haider played his flute on the steps of the shrine. For us, these experiences are unforgettable.

The response from students in Jhang had to be seen to be believed. I have a recording of how young people shouted out, ‘Dehshatgardi Murdabad’ during our performance. It shows that even the people of Jhang are opposed to religious extremists. We need to channelise that energy. We are playing our role in that larger struggle through our music.

Lenin claimed “I can’t listen to music very often, it affects my nerves. I want to say sweet, silly things, and pat the little heads of people who, living in a filthy hell, can create such beauty.” Clearly, you would disagree with this statement?

That’s only because he had not heard Laal yet!

Lenin was a fanatical disciplinarian in his own personal life (as reflected in the above statement). But he did not hold these views about music with respect to society as a whole. On the contrary, he strongly advocated the development of the arts to enrich the cultural life of a socialist society. Hence, whatever his personal preferences for music styles, I’m sure he would have approved of the work we are doing.

What would you say to critics who say that Communism has lost its relevance or is a failed ideology?

Every ruling class has viewed its social system as the final word in history. But the march of history has proven them all wrong. The very first attempt to create a socialist society achieved great successes from 1917 all the way to the 1980s. But it also had many flaws owing to which it was defeated in 1991.

A historical analogy can be drawn between the Reformation and counter-Reformation. With the defeat of the Reformation, it was assumed that the old order was now stable. History proved that to be an illusion. In the same way, history will also demonstrate that the triumph of capitalism will be nothing but a Pyrrhic victory.