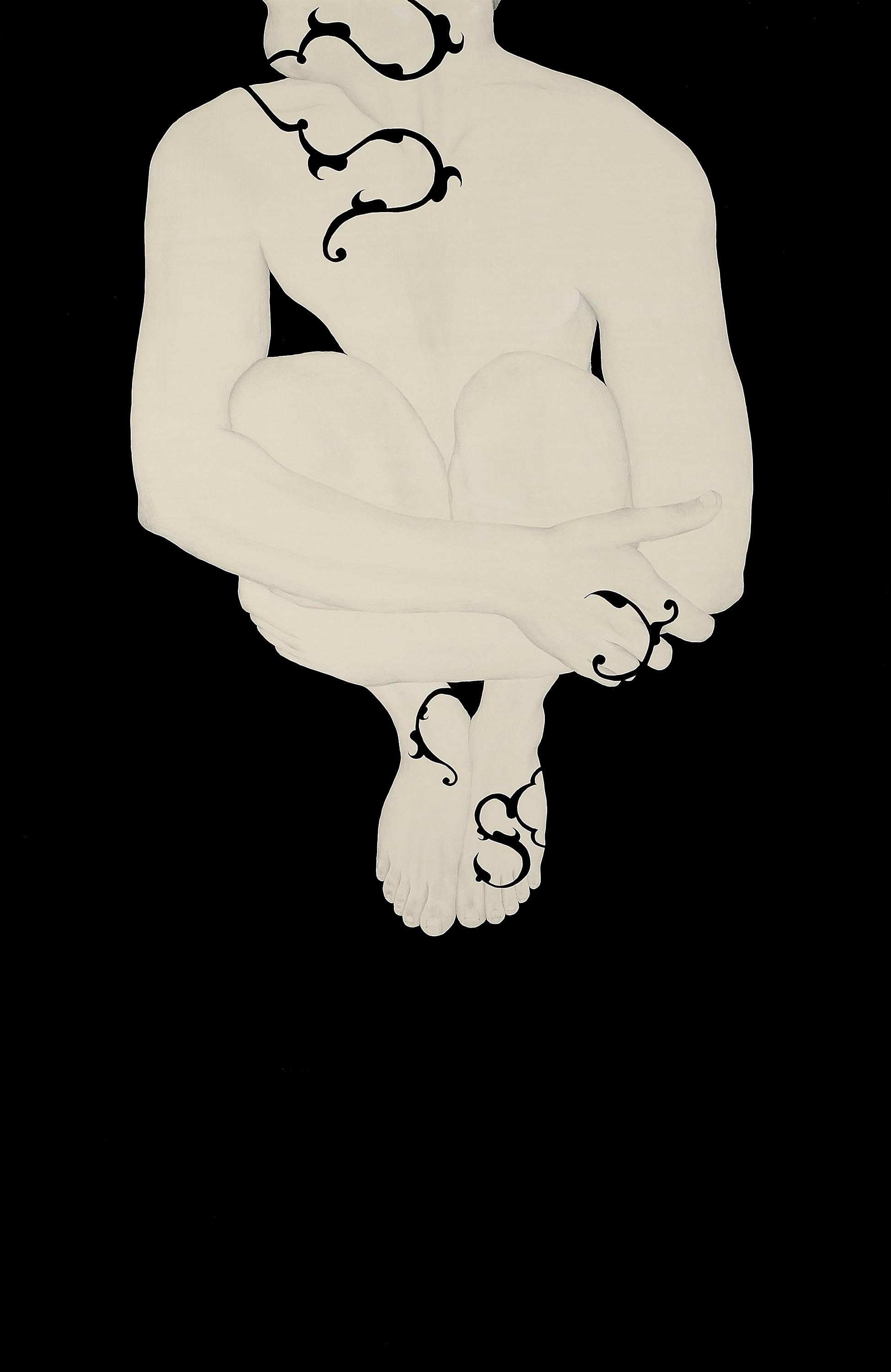 Shocked by the dismal state of affairs in Pakistan, many local artists have expressed their grievances through their work. For artist Imran Mudassar, sectarian violence manifests itself in many shapes and his latest work at Chawkandi Art showcased his artistic commentary on it. Exhibiting alongside was Huma Iftikhar, whose works examine the hunger for power.

Mudassar’s series, titled Open Secret, uses mixed media and a host of symbols to create the impression of vandalised walls. These outburts of vandalism symbolise the spirit of the time.

Overall, the series tells a poignant story about the destruction of faith, community and infrastructure. Torn, disfigured and burnt pamphlets — symbolising inter-faith rivalry — invite Shias and Sunnis to their respective religious gatherings, while human hearts, one dark the other broken, represent the dark side of salvation.

The Urdu words on the images speak of a rift within the Muslim community, while the English speak of a disparate society. All the words, however holy or beautifully inscribed, speak of tragedy. Stencils of guns, flies that drones and beetle nut stains permeate this series, representing the filth that has been allowed to fester in our society.

While Mudassar’s first series is a commentary on how our socio-political infrastructure is conducive to corruption, the second series ‘Untitled’ captures on the tormented spirit behind the set-up. Using paint and ink on wasli, Mudassar examines how corruption in the religious community has led to violence. The recurring motif of creeping barb-like vines takes its shape from the filigree borders typically seen in Islamic art and architecture. These vines seem to have a life of their own; in some works they look as if they are helplessly observing as their tentacles turn dark, while in others they engulf the human bodies, like a disease.

In one painting, this filigree breaks off and falls, representing the loss of a community that protected its religion. In another, it moves forward like notes on a sheet of music that started melodiously but became darker as they inched forward. The filigree reappears in the painting of a man, whose heart, rendered in black, is linked to a grenade by the filigree, thereby representing the connection between violence and faith.

This connection is further examined in a painting in which a black heart is juxtaposed with a grenade. The unlikely pair of images is surrounded by delicate filigree and flowers, while some of the vines branch out like a plague in black with flies swarming. The black in the paintings pulls the observer in, and suddenly one sees one’s own reflection in the glass of the frame. This is perhaps an unintended effect but it certainly startles the viewers by placing them in the work and subsequently, the system of faith and violence that is being critiqued. 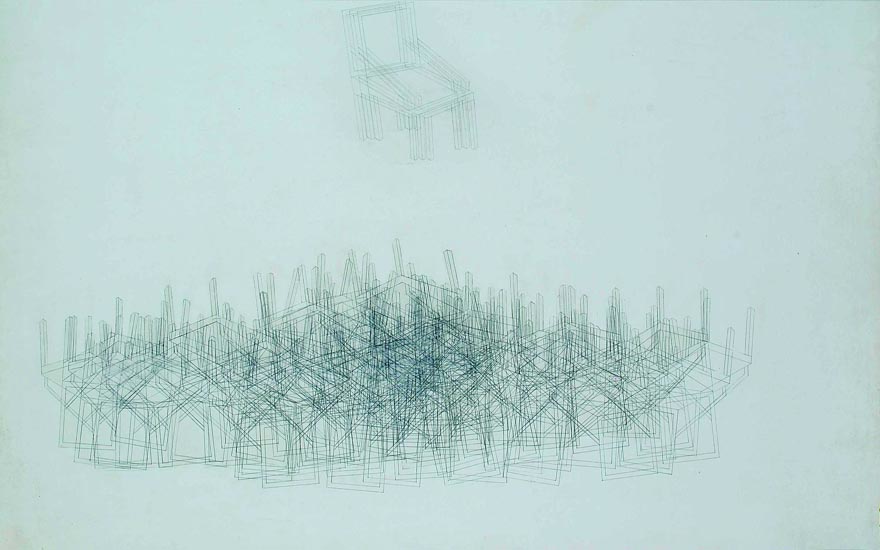 Mudassar’s work depicts a society that is deeply ruptured and Huma Iftikhar examines a similar sense of grief in her series. Through repetition of geometric forms, her work provides a political commentary on the barricades that demarcate violent limits within society and the constant battle for the throne or kursi.

Huma Iftikhar works with the form of a chair and a spiked road block and juxtaposes it with a layered blur of the same form, demonstrating how confusing and conflicting power has become. In another work, she shows one chair floating over a pyre of several upside-down chairs, as if ruling over the mess in its own blurry glory. 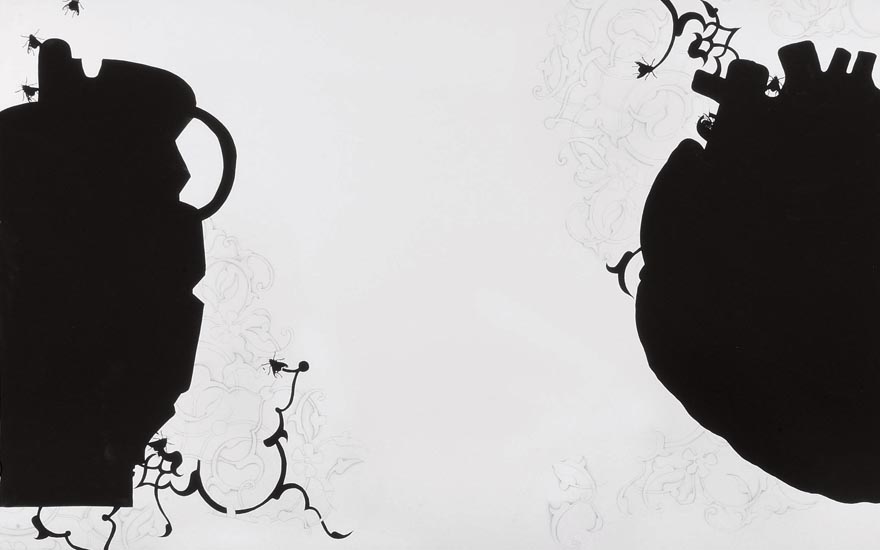 She works with the form of a chair and a spiked road block and juxtaposes it with a layered blur of the same form, demonstrating how confusing and conflicting power has become. In another work, she shows one chair floating over a pyre of several upside-down chairs, as if ruling over the mess in its own blurry glory. And in one particularly striking canvas, a lined tapestry reveals a line of frayed, broken threads at the base of its weave. Through such images, Iftikhar questions the truth about power systems and shows how they waver into chaotic confusion, hiding their agendas only to disfigure and disconnect themselves. While it is fascinating to see how our pool of talented artists examine the state of our nation through impressive, well-balanced works of art, one feels that they need to create new languages with which to define our surroundings, not just present more adjectives to describe it with.

Gifted with the rare sensitivity of expression, our artists must dream past this turmoil.